Lure of the Godfather 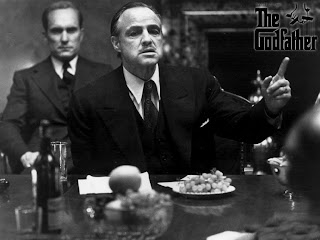 I have watched The Godfather more times than I can count. But every single time I run into the first, second or third editions on the television, I can't help myself. "Just when I thought I was out, they pull me back in." (Michael Corleone, Godfather III)
It doesn't matter what order they show up, the acting, the storylines, the stunning cinematography, is as captivating today as the day they premiered.
As I type, the original from 1972 is playing on Peachtree TV, 38 years old already. Al Pacino is a baby, Diane Keaton a young girl. Marlon Brando, now gone almost six years, gave one of the quintessential performances of motion picture history as Don Vito Corleone, winning but refusing the Oscar for Best Actor that year.
The first two Godfather films have incredible ensemble casts, each character cementing themselves into our collective consciousness. The third film was good, but not as good.
From Robert Duvall as Tom Hagen to James Caan as Sonny Corleone, this movie is incredible.
May 15, 2010 - 194 pounds, 26.4% body fat
Email Post