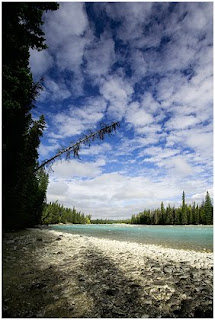 The shore of the Athabasca River is cool and crisp in the early hours of the morning in May. A lone fisherman nestles in his white plastic patio chair intently watching the tip of his rod for signs of action. The temperature is hovering just above zero. It's cold trying to tie a knot, getting the leader attached to the line so that the pickerel rig and minnows can follow.
The sun is to my left, popping up over the lower townsite of Fort McMurray, coming in from the northeast at this time of the year. It isn't warm, but it is comforting.
Large rocks are strewn along the shore, which is wider than normal as the mountains have yet to melt upstream. The fellow fishing came to Fort McMurray in 1981, from New Orleans of all places. He points out that the rocks would normally be cleared off during the river break and subsequent ice jams, but that we haven't had a good one in a long time. He points to a massive rock sixty feet away on the lower part of the hill.
"That rock started out over there," he said, pointing to a spot up the river near the bend at the end of Fisherman's Beach. "Each year during break-up it got tossed farther and farther." The rock in question is the size of a small car.
Water levels are low, everyone says. My rig keeps getting caught up, snagged, wedged in between rocks hiding just below the surface of the water. I had purchased five rigs last weekend, and now they are all gone, lost at sea--so to speak. The good news is that they are not expensive, just 88-cents at Walmart, plus the replacement cost of the bomber sinkers.
The fish aren't biting this morning, only a medium sized goldeye and a solitary walleye. No sign of that monster northern pike that snapped my line yesterday.
My fingers are numb, despite the fact I have them buried in my jacket pockets. Plus, I have to go to the bathroom. I can't hold it like I could when I was younger. My coffee is done, it's past eight o'clock, it's time to pack up and go home. Mother's Day 2010.
May 9, 2010 - 192 pounds, 29.7% body fat
Photo Credit: David Osborn Nature Photography
Email Post
Labels: Athabasca River