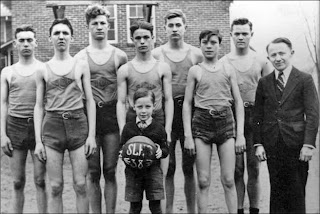 I was a member of the Kamsack Spartans basketball team in 1984-85. I worked hard, always giving it a 100 percent effort, but I was terrible. I couldn't make a lay-up to save my life. Not much has changed in 25 years.
Our staff has made a habit of doing a lunchtime sport activity every two weeks, a great idea that has had us play volleyball and badminton so far. Today, we battled the hoops.
Back in the day I was an outstanding defensive player, able to poke the ball out from the advancing offense ending up in the fast break. Every single time I would dribble in at full speed, grab the ball, take my requisite two steps, leap up into the air and gracefully miss the basket. Thankfully, our star player, Randy Burtniak, would be on my heels ready to grab the rebound and pop in the two points. So, in that very skill-absent way I contributed to the team's success.
Today's game featured lots of back and forth action and a cardio workout much more demanding than my normal turn on the treadmill. After about forty minutes of play I was very much feeling my age. I remember with stark clarity the feeling in high school of being doubled over with exhaustion after two-hours on the court with full intention, total effort. It's just too bad that feeling arrives much earlier than it once did.
May 12, 2010 - 191.2 pounds, 28.7% body fat
Email Post
Labels: Basketball