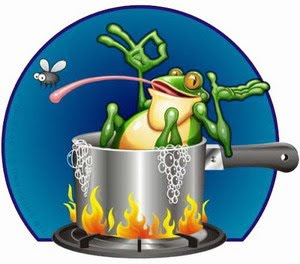 How does that story go? If you put a frog in boiling water, it'll jump out. But, put that same frog in a pot with room temperature water, then stick it on the stove and bring it to a boil. That frog will happily float in that water until its dead, completely oblivious to its inevitable fate.
We were bunch of frogs in the Bob Lamb building at the college yesterday as the air conditioning unit failed. As the day went along, the temperature incrementally rose to 27.7 degrees at day's end. By evening, classrooms were well above 30. I got home and felt completely awful, needing to nap before supper with a killer headache and in bed for good, exhausted, by 9:30 pm. Unlike that frog on the stove, I got to live another day.
The second day without air conditioning was much better. The difference was that the day started and ended the same--HOT! Much like our acclimatization to Mexico, on the second day I was right as rain, able to function as if the temperature was normal.
May 20, 2010
Email Post