Who is the Fake John Vyboh 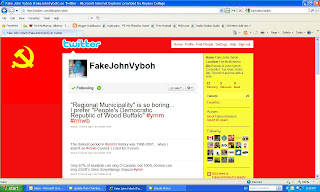 The political class of Wood Buffalo is buzzing this week wondering who is stirring the proverbial pot posing as the Fake John Vyboh on Twitter. The profile emerged on Tuesday night providing live commentary of the regional council meeting from the fictitious point-of-view inside Councillor John Vyboh's mind.
"I've often told myself that Pierre Trudeau was a taller version of me," the Tweets began.
"Blah, blah, blah Henk...get to the part where I justify tax increases," wrote Fake John Vyboh as Henk van Waas, Regional Assessor & Director of the Assessment and Taxation department, made his tax rate bylaw presentation.
And as Councillor Vyboh began his prepared statement in opposition to the zero increases on the table, this Tweet appeared: "I hope these dramatic pauses are working. It's hard to read one of my landmark addresses quickly...they're written in crayon."
The jibes and pokes continued through the contentious and fractious meeting. "I'm tired of business owners. None of them want to pay my higher taxes. Elect me as Mayor and I'll be sure to drive them out of #ymm." Of course, #ymm is the hash tag for Fort McMurray in the Twittersphere, the airport call letters for this community.
There are some suggestions that the guilty culprit was sitting in council chambers, posting these updates from the comfort of a portable device. Or, it is possible said political satirist was sitting at home watching the video streaming broadcast online. Wherever he or she was, a number of things are certain.

In the absence of political discussion or debate in the local press, it is interesting that the battle ground is forming in the social media universe. Let's be honest, social media is quickly becoming the place where conversations began and end. So, it stands to reason that in this election season, votes may be won or lost online on websites that were in their infancy that last time we went to the polls for a municipal election.

Who is the Fake John Vyboh? I have my suspicions, but I'm not sure we'll ever find out.