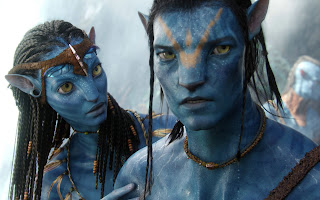 It is the biggest movie in history, a wonder of cinematic technology, and the brainchild of Canadian director James Cameron--Avatar (2009). It is unlikely that if you live anywhere in the civilized world that you haven't been exposed to this ubiquitous brand. I finally watched it last night.
I had heard that during the Academy Awards, our oil sands were in the cross hairs of environmentalists who took out an ad in Variety magazine linking this tar sands development to the Sky People, the name given to the indigenous population of Pandora by the humans who are raping their forests in search of unobtainium. 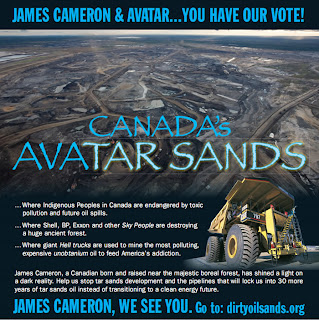 As the lead character Jake Sully (played by Sam Worthington) arrives for his tour of duty on this distant planet in 2154, a bucketwheel-like machine is chewing up the ground off in the distance while a massive heavy hauler passes by casting him into shadow. The purposeful parallels are striking and have helped reinforce the anti-tar sands message being propagated by environmental lobby groups around the globe.
The low point in the movie in my mind was when we were introduced to the precious unobtainium. "We have to introduce the object of the humans' desire," likely thought Cameron. So, instead of attempting to weave that information into the story in a believable way, he inserted a stilted piece of business that sticks out like a throbbing thumb.
In many ways, I felt like I was experiencing flashbacks of a whole series of movies during Avatar. As Sully is introduced into the community of the Na'vi I was reminded of Dances with Wolves. As we're introduced to Sigourney Weaver as Dr. Grace Augustine, futzing about in a darkened space lab, you can't help but think of Aliens. When the humans choose shock and awe in place of diplomacy, flashbacks of Vietnam, Persian Gulf and Iraq war movies abound, from The Hurt Locker to Apocolypse Now. As Sully gave a rousing battle speech from the mount, I couldn't help but remember Braveheart. And as the sweeping music filled the speakers in anticipation of the movie's climax, I was back on the deck of Titanic.
It is Saturday morning and my six-year old son Ben has settled in to give it a watch.
"There is not a single bad word," I said to him.
"Not even stupid or shuttup?" he asked, slightly mystified.
"Not a thing," I said, as he slipped the disc in the machine and pressed play.
May 15, 2010 - 194 pounds, 26.5% body fat
Email Post