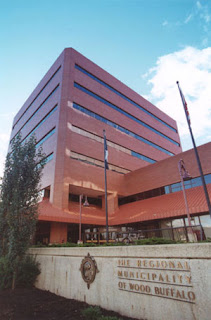 I decided it was time to audit a council meeting, in person, away from the computer screen. As I found my seat arriving 15 minutes early, I realized how long it had been since I had been in chambers--likely 6 or 7 at least, since the major renovations took place.
Previously, they had several rows of 1980's era lobby benches, over stuffed and highly uncomfortable. The colours of muted orange and burnt red are popping into my head. Today, the Council chamber has rows of real chairs, enough to accommodate a sizable audience of 30 or 40.
The meeting is somewhat of a multi-media experience as big screen TVs stare at you from both sides of the room--Council members look at similar screens that face their direction. This is where PowerPoint presentations are displayed as well as close-ups of the presenters who have their backs to the gallery.
Council members have to buzz in when they want to speak to an issue. I'm assuming the Mayor has a little master panel that lights up like a Christmas tree when the issues are hot--but I'm just guessing. When it's your turn to speak, a little red light illuminates just below the tiny microphone, reminding you that you are LIVE not Memorex.
Municipal staffers line the room, legal and legislative staff behind Mike Allen, Gordon Janvier, and David Blair's side of the "U", and assorted other support staff behind John Vyboh, Mila Byron and Phil Meagher. In the gallery are assorted managers and staff connected to one or several of the issues on the table that meeting. It's a far cry from the smattering of souls that would show up back in the day.
As I sat there I watched and sketched, keeping my mind busy capturing images, words, ideas. Sheila Bailey, a presenter in support of a bylaw to enforce the use of the red flashing lights on school buses, was sitting next to me--probably wondering what the heck I was drawing.
After two hours of presentations, oodles of questions and lots of back and forth, a break was called and I slid out of the room and headed home to put my sons to bed, hoping to catch the rest of the meeting on Shaw Cable or online. Unfortunately, Channel 10's broadcast had no sound and the streaming video on the RMWB website was choppy at best. So, I shut it off, grabbed my book and called it a night.
May 26, 2010 - 192.4 pounds, 289% body fat (which is really a guess as the body fat percentage reading is off the grid for some reason)
Email Post