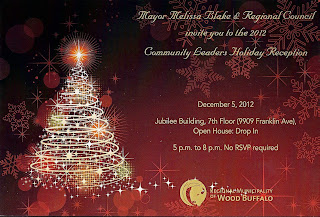 We hosted our community leaders reception up on the seventh floor of Jubilee Centre yesterday, a renovated space that was completed earlier this year.  It proved to be a great spot to hold this mingling event, stretching from the Mayor's office reception area into the large boardroom which was wide open thanks to the nifty wall panels that can slide out of the way.

For the uninitiated, these kind of gatherings can be a little daunting, especially if you don't know a lot of people or if you're not comfortable engaging strangers in conversation.  It is a little easier for a guy like me who has been to hundreds of these and has been in the community for 16 years.  Most of the faces on the seventh floor last night were somewhat familiar, many were colleagues that I consider to be friends.

"Look," said Kyle Harrietha from CEMA and one of the most politically engaged people that I know.  "It's a Leadership Wood Buffalo reunion."

Without realizing it, a large group of us had gathered in one corner of the room that all had Leadership Wood Buffalo connections, as alum, staff or board members.  With its seventh cohort now going through the program, the initiative to increase our community leadership capacity has graduated well over 100 people since it began in 2006.  At a community leaders reception it stands to reason that there should be many of us in the room.

While meant to be a social occasion, there are often rich and important discussions that take place in these scenarios. In other words, fun time can and should be time well spent - building relationships, finding common ground, sharing passions, concerns, and dreams.  It also a time of celebration.

"Congratulations," I said to Arianna Johnson, Executive Director of the Wood Buffalo Food Bank Association, giving her a big hug.

"What a tremendous success," I said referencing their record-breaking food bank drive that had happened the previous weekend.

Going around the room, head somewhat spinning as I reached the half way point, I was enjoying great conversations about our growing cultural diversity, the state of the economy, strengthening strategies for nonprofits, and myriad other topics that made the time absolutely fly by.

"You made it," said Mayor Blake, as we crossed paths mid-evening.  She knew I was going to be a little late as I wanted to spend some time at home cooking dinner for my family and catching up with them after what had been a busy week of largely not being home.  A few more words, and she was off to the next clutch of leaders, working the room as effortlessly as if she was in her living room reconnecting with cousins.

It is such a pleasure to serve with a group of men and women on council who are so committed to this region and the people we serve.  They were scattered throughout the room, smiling, engaging, listening.  They were super present, which says everything about their character and dedication.

I was particularly pleased to see our Gujarati and Pakistani friends last night.  My face lit up with I saw Manish out of the corner of my eye.  He was such a gracious host to my sons and I when we attended the Diwali and Annakut celebrations a few weeks ago.

"Honestly," I started, "that was the most incredible cultural experience of my life."  I wasn't exaggerating.  It was amazing.

"You look very familiar," I said to Zaid from the PCA group a few minutes later in a different part of the room.

"That's because we're on Facebook together," he said, appropriately disappointed that I had not made that connection, but forgiving nonetheless.

We had a great discussion about the growth of the Pakistani community, their commitment to being here, and opportunities for us to work more closely together.

It's impossible to touch base with everyone in these environments.  Flashes of memory go by as I recall the evening filled with presidents, executives, board chairs, and awesome volunteers going around the room.

All of a sudden I was back where I started, having circumnavigated the reception space.  Two hours had gone by in what seemed like an instant.

"I'm heading home," I said to no one in particular as I grabbed my winter coat, piled into the elevator with my good friend and fellow writer Kevin Thornton, and headed down to the main floor.

"My car is this way," he said, heading east.

"Have a great night," I replied, heading west and home, after what had been a delightful reception.
Email Post