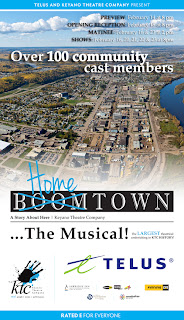 I got a little giddy talking about Hometown the Musical! with my friend Jesse from the airport last week.  As I talked about the plot - of weaving story lines and a balanced mix of humour, music and authenticity together - my hands twisted, turned and swung about.  I talk with my hands a lot when I get excited.

"We've had a number of meetings with Nick about the show," said Jesse.  Nick is the production manager, responsible for the complex streams of creativity that will need to converge on the main stage at Keyano College by mid-February.  As the setting for the story is the new terminal, working with the Fort McMurray Airport Authority has been essential.

"They have been so accommodating," said Nick.  "They have said 'Whatever you need' several times.  They are even letting us use some actual waiting room benches."

For most people - the odd exception being those rare souls who have been given a tour of the construction site - watching Hometown will offer the first real-world glimpse of what our new terminal is going to look and feel like.  While only a representation, it will offer a stylized view into the looking glass to April 14, 2014 when the actual facility is scheduled to open.

"We are excited to get involved in the community," said Jesse.  The largest musical in the 33-year history of Keyano Theatre Company gives them a tremendous platform to build awareness and positive momentum as the opening date gets closer.

Meanwhile, Nick and his team of technicians, designers and artists are working through the logistics of managing a cast and crew that will end up numbering between 120 and 130.  Simple details provide enormous challenge when multiplying participants ten-fold as compared to a normal show.

"Simple things like where we will have everyone put their winter boots during rehearsal have to be figured out, as we've never worked with a group this large before," said Nick.

"We're also being challenged on the technology side.  In order to manage the volume of video files, we have to daisy chain seven computers together, eventually controlling everything from our control board. What we're going to try and do is right out there on the edge."

I could see the fire in Nick's eyes as he contemplates the exciting challenges that lie ahead when KTC will go from cruising speed to hyper drive in the New Year.  It will be all hands on deck to pull this epic production together.
Email Post