The Future of Oil 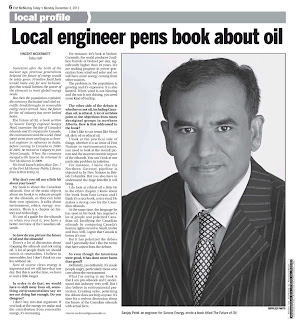 "I wanted to write a book that would explain the oil sands," said Sanjay Patel, over a coffee at Live Cafe a few weeks ago.  The book he has published is called The Future of Oil | A Straight Story of the Canadian Oil Sands.  He'll be doing a formal book launch at the Fort McMurray Public Library this Friday evening.  As I had been asked to introduce Mr. Patel, I wanted to spend some time with him and get an advance copy of the book so I can speak about it in an informed way. 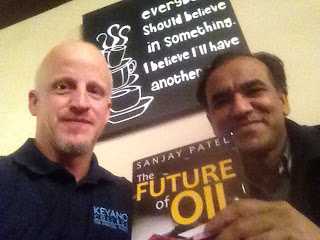 I can't remember exactly how he said it, but in that conversation he referenced a surprising lack of knowledge, in the general community and even with many people working in oil sands, about why this development is so important, not only to our region and our province, but to our country and planet.  He set out to take a factual, well-resourced approach and has delivered a book that is incredibly current, jam packed with verifiable facts, and anticipatory of our uncertain future.

My lack of knowledge about the industry was epic during my first few years in Fort McMurray.  At the time, I was nose to the grindstone trying to program two radio stations, dealing with day to day priorities, and building a life in the north.  And while I should have taken the time to get a sense of the industry that was driving everything; I didn't.

The Future of Oil should be mandatory reading for people in our community who need to understand the strategic role that oil sands play in the world.  Radio personalities, politicians, teachers, leaders in the nonprofit sector, managers, business owners, professionals should all have this book on their shelf.  People who work in the industry, traveling the buses back and forth to site each day, should know why they are doing it and how their efforts are vitally important to so many people around the globe.

I've made good progress on the book, slamming through the first third very quickly.  To be honest though, my reading has slowed down considerably in the chapters about GHG emissions.  That said, I will persevere, and make it through to the end before the event later this week.

The misinformation and conjecture being dished out about the oil sands development, said by some to be the "single largest industrial project in the history of mankind", is mind-numbing at best, stupefying at worst.  Sanjay packs fact, figures and objective insights into these several hundred pages, providing a one-stop shop for everything from the economic impact of the industry to how it has emerged as the third largest proven oil reserve in the world, containing 175.2 billion barrels of recoverable oil with  today's technology, just behind Saudi Arabia (265.4) and Venezuela (296.5).

Sanjay is as accessible in person as he is in the pages of The Future of Oil.  An engineer working for Suncor, he manages to be gentle with his breadth of knowledge and technical know-how, making it infinitely easy for non-scientific people like me to get what he's trying to say.  He has also done a brilliant job of capturing the continuum of eventualities of what lies in the future, as so many variables effect how this industry is going to grow in the next 10 to 15 years: oil price, geopolitical stability, pipeline approvals, access to labour and myriad other factors, some within our control, many not.

If I was still in the radio business, I'd want to put Sanjay on the air every week, doing a segment about oil sands.  He is a professional watching things closely, with an incredible arsenal of facts and indicators at his fingertips.  Even edging toward the print deadline for The Future of Oil, changes were being made to ensure that the final version was as close to current as possible.  Even with that, the oil sands are shifting constantly.  Murmurs of retrenchment are juxtaposed against investment announcements like the one this morning in the Fort McMurray Today of Canadian Oil Sands injecting $1.3 billion into Syncrude in 2013 to increase mining infrastructure and production.  The Future of Oil gives you a sweeping overview of where we've come from and where we might be heading to in the coming decades. 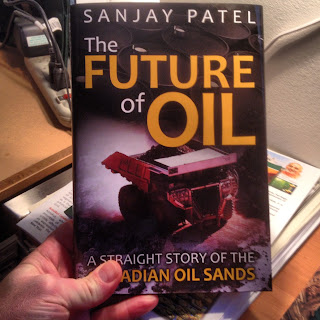 If you're interested in finding out more, join us for the book launch event on Friday from 6:30 pm to 8:30 pm at the Fort McMurray Public Library.  Sanjay would love to meet you and talk about the industry that surrounds us.  Or, you can go to The Future of Oil website to purchase your copy right now: www.futureofoil.ca.

I think Neil Camarta's assessment on the back of the sleeve jacket speaks volumes about the book.  "If you really want to understand the oil sands business - warts and all -- look no further," he said.  "Sanjay Patel has compiled the definitive myth-buster on the industry."