"Next year we're likely going to join the Million Club," said Scott Clements, CEO of the Fort McMurray Airport Authority.  "That is going to put us on the international map."

Scott was visibly excited and proud of the extraordinary growth of the airport known in Twitter and aviation circles as YMM.  As he looks to the end of the year, considering record numbers of passengers the last couple of months, he fully expects to reach the 950,000 mark.  At an airport terminal built for 250,000, that is not an insignificant achievement, or is it particularly comfortable when a few flights get delayed.

The team at YMM has had to be innovative in order to cope with the exponential increase in passenger traffic, expected to be in the 26% range this year.  Concurrent with coping with a chronic lack of space and amenities, work has been happening to secure international flights, the first expected to take off in less than 10 days.  An additional announcement regarding international connectivity could be coming before we turn the page on the New Year. 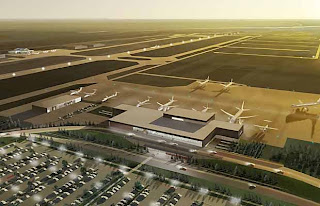 Meanwhile, works continues apace on the new YMM terminal, which is going to change the way we fly in this region.  Expected to open in April 2014, the new facility will include both arrivals and departure levels, way more parking and capacity to handle 1.2 million passenger movements.  You do the math on that, considering the rate of growth, they'll need to be talking expansion before they finish sanding the drywall on this project.  Based on what I saw last night, there will also eventually be a hotel built that directly connects with the terminal.

One of the more startling facts that was shared last night was the big reveal about the number of airports in the oil sands region.  Who could have possibly imagined that there are 47, peppered throughout Wood Buffalo.  It makes sense though, with the purported level of fly-in, fly-out activity that is happening to build these projects.

We are currently the 16th busiest airport in the country.  Soon, we will be giving both Regina and Saskatoon a run for their money, eventually Quebec City, St. John's and Kelowna.  It was great to be in that room last night with the Fort McMurray Airport Authority team, along with community and business leaders.  Enthusiasm is building as our flying experiences in to and out of Fort McMurray are about to dramatically improve.

"The new terminal can't come soon enough," said @Saskgirl1406 on Twitter last night.  "Maybe I won't have to sit on the stairs with 10 others eating dinner and waiting for a flight."

Well @Saskgirl1406, I can promise you that this team is doing a full court press on this project and on the existing terminal.  We'll need to grin and bear it for a little longer, but relief and international status are just around the corner.

I hope I got all my information straight, as I was frantically tweeting, trying to keep up with the flurry of facts and good news dished out last night.  Jesse Meyer, my marketing counterpart from the Airport Authority, is going to fire over a fact sheet later today.  We'll see how I did.

Observers probably noticed that I was getting a little animated talking to Jesse and his girlfriend last night. I was giving them a sneak preview of Hometown the Musical, Keyano Theatre Company's next production (opening in February) which, ironically enough, will be set in the new YMM terminal.  It may prove to be your first opportunity to give the new facility a test drive, and have a few laughs in the process.
Email Post