Hometown - the story of us 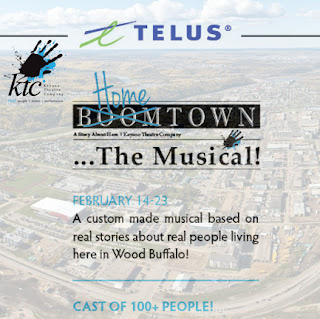 How do you go about telling a story that captures the soul of a place? That was the task in front of playwright Michael Beamish and artistic director Claude Giroux as they began building the narrative that would become Hometown the Musical, Keyano Theatre Company’s production slated to open in February 2013 in Fort McMurray. Committing first and creating second – the season line-up was announced before pen had been put to paper – required confidence that it could be done.

“I have gone through Christmas versions of this process in many communities,” said Giroux.

“I wanted to generate a project that would be über inclusive and developmental for the entire community.  Trust is integral in this process, trust that it will work the way you’re seeing it in your mind.  You also have to make sure to get all the right people involved and excited about what you’re creating.”

“It was a cold windy day in March when Claude summoned me to the Kozy Korner for a breakfast meeting,” recalled Beamish. “He turned to me and said that he wanted to create the biggest musical in our region’s history, one in which we put the entire community on stage, from the mayor to stripping fire fighters. I want you to collect interviews, co-write and direct the show with me.”

Beamish had moved to the community in 2001 for his first two years of a fine arts degree and often dreamed of directing a show on the Keyano main stage.

Lots of research preceded many interviews (over 100) with a disparate collection of locals that ranged from a manager of a local adult entertainment club to a female civic leader who is among the most respected mayors in the country.  Wearing my various hats – arts advocate, communicator, social media guy, and politician – I was one of those interviewed.

I had invited Michael to join me at the river, where I had planned to do some fishing.  He asked his questions, capturing the entire conversation on a small digital recording device, while I watched the tip of my rod waiting for a fish to strike.  He graciously allowed me to ramble on, and while I don’t specifically see myself in the finished script, I still feel like I am there somewhere, between the lines.

“I traveled to different parts of the municipality to discover the meaning and undertakings of this fast-paced, rapidly evolving region. What I found most striking was the passion that people feel for this place.  Citizens of Wood Buffalo have a strong love of family, pride and purpose in their pursuits, and a strong sense of belonging.”

Hometown attempts to reflect the dichotomy of Fort McMurray and the Wood Buffalo region, a place that can be equally reviled as revered.  Beamish holds nothing back in the script, uncovering a few of the harsh truths about living and working in a place that has been described as the economic engine of Canada.  People here can make a lot of money, yes.  But, they can also work crazy long hours, which can and does have an impact on relationships.  So, having a disgruntled character like Mary reaching the point of no return as she prepares to fly back to Newfoundland is an authentic slice of the Fort McMurray pie.

“It would be difficult to tell our story without showing the challenges we all face here in Wood Buffalo,” said Giroux.  “It is how we overcome those challenges that make for great storytelling.  I think the audience will appreciate the truth of our story.”

Set in the yet-to-be-opened new terminal at the Fort McMurray International Airport, Hometown the Musical uses the natural comings and goings of a community portal to interweave multiple stories.  Radio personalities are on location waiting for the official ribbon-cutting of the facility as a winter storm plays havoc with incoming and outgoing flights.  It provides the perfect metaphor for a place where change is constant, where people come to and leave from - in ever-increasing numbers, and where first and last impressions are made.

Wood Buffalo is also a place where drinking the water can change the course of your life, and often does.  People come here on the make-all-the-money-I-can-two-year-plan and end up staying for their working life.  Those characters are peppered throughout the play: sitting at the airport bar, sending their daughter off to university or letting go of the girlfriend who had a different reaction to what came out of the tap.

I found the storyline about the unappreciated and abused nanny to be particularly heart wrenching, as I know that it happens all too often in a community where bringing a caregiver from overseas is the best option for families in which both parents are working, or one that has been broken apart by divorce.  It can and does get ugly.  It also can and does get beautiful, which Beamish brilliantly illustrates as Patience the nanny lands with a family that immediately feels like home.

I saw a little bit of our family in that thread.  When our nanny arrived at the airport after a long flight from Hong Kong, it was love at first sight.  She connected with our sons immediately and remains an extended member of our family, though it has been years since she has lived with us.

Wood Buffalo is also a place of unparalleled opportunity and second chances.  Beamish hones in on Sonya, an original resident who left the community, fell into all kinds of trouble – narcotic and otherwise – and came back to discover that putting sins behind you and moving forward in this dynamic place is truly possible.

It’s interesting to look ahead to the finished production and imagine what someone who knows nothing about our community would take away from the experience of watching the show.  Beamish has a pretty clear idea of what he wants Hometown to achieve in that regard.

“I hope they take away the essence of Wood Buffalo,” he said.

“We are a very diverse community of dedicated people who are here to make brighter futures for our families, ourselves and for others.  I want people to experience what we mean by Big Spirit.”

For artistic director Claude Giroux, there is universality about this story and what it means to call a place home.  No matter where you lay your head at night, a connection will be made with the struggles these characters go through trying to come to grips with their own sense of place and belonging.

Hometown is, in fact, a musical, with large dance numbers, familiar pop songs, a multi-media approach and design that celebrate what “home” means to people in the Wood Buffalo region.  It flirts with the stereotypes and dances with the realities; it champions the region’s rich history and its abundant opportunity.

“A very fast-moving production with music delivered in a very unique way,  Hometown will feature a visual presentation that will truly underline the technologies available today, as well as the beauty of where we live,” said Giroux.

“When I close my eyes and imagine opening night, all I see are smiles, tears, joy and celebration – everything culture, art and shared experiences should be.”