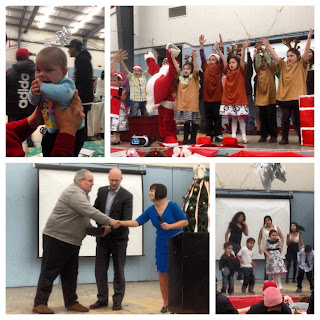 Several of us - Mayor Blake, Councillors Tatum and Burton, and MLA Don Scott - hopped on to one of those 21-passenger buses yesterday afternoon, headed south, then east, stopped in Anzac to pick up Ward 4 Councillor Stroud, and carried on to the small community of Conklin.  We were going there under the guise of community engagement, but really we were there just to hang out with the people, enjoy a Christmas concert and enjoy some amazing food (Thanks PTI). 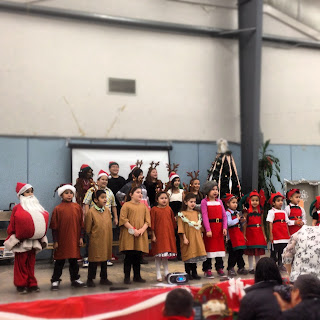 Organized by the Conklin Community Association, the evening began with a series of performances, both live and on video, by students from the Conklin School. 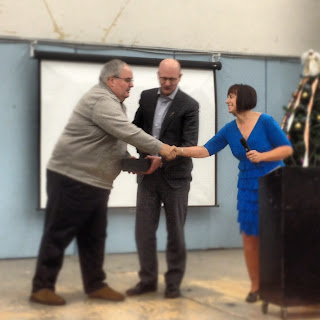 "That small group of kids were louder than groups I've seen three times their size," I said to Principal Jack Howell, who was honoured that evening for receiving a nomination for the Mayor and Council Toast of Champions coming up January 24th. 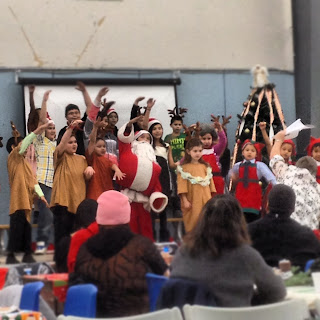 "These are great students," said Jack.  "I love it here.  This is home to me."  This was quite a statement coming from a leader of a school that apparently went through nine principals in the period before he was hired.

I had first heard about Jack from my sister-in-law who had been in the school delivering some drop-in programming with Inside Education, an organization based in Edmonton, doing some great work throughout the province.  She came for a visit after spending several days out there and couldn't stop talking about the innovative things being done by Jack and the impact these initiatives were having.  Mr. Howell, originally from Newfoundland, has not only made Conklin his home, he has taken matters into his own hands to make sure that these super-talented students get the tools they need to succeed.  His legendary bottle drives have generated tens of thousands of dollars.  He has also inspired the participation and contributions from many of the oil sands operations in the area. During his opening remarks, he dropped in the fact that iPad 2s were going to be in the classrooms in 2013 - one for every student. 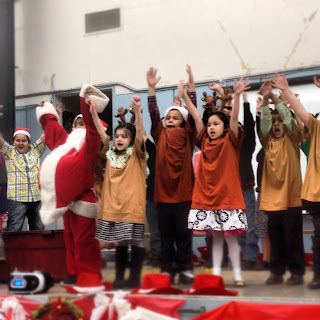 "These kids are incredibly creative," he said in response to my compliment about the performances we had just enjoyed, ducking into the hallway for a wee little chat, away from the noise in the main hall. He talked about one student who had learned the lines in the play just like that (snapping his fingers).  "They just have so much natural ability."

As we stood there in the hall, a confluence of sorts, as parents and children were coming and going, either outside for a breather, or chasing each other around the corner.  As kids tore by, he had something witty to say to each, seamlessly connecting with them while continuing our conversation. 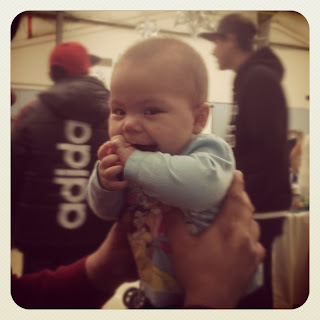 I spent much of my evening with with Ward family, drawn to their table by 5-month old Isabella.  I enjoyed getting to know Louis and his wife Teri-Lynn from Newfoundland, making googly faces at the baby, and talking to the matriarch of the family, Linda.  A mother of 11 children, and grandmother to 13, she is originally from the Elinor Lake area near Lac la Biche, but ended up in Conklin about the same time that I arrived in Fort McMurray.

Linda's eyes lit up when here son Terrance took the stage, joining about 20 students doing some freestyle jigging.  He was amazing, as was his teenage daughter who stood out among all the children learning this traditional Métis dance.

"We're just naturally good at it," she said.  "It runs in our blood," chuckling to herself as Terrance finished up his impressive performance at the front.

It was an honour to get to know the Ward family.  It was great to finally meet Mr. Howell and talk about the important work he is doing with the youth of Conklin.  And I was delighted to re-connect with Peggy Beaudry, who I had previously met during a Leadership Wood Buffalo opening retreat a couple of years ago.  She has an infectious personality and a hearty laugh that brightens up a room.  It was also nice to bump into a few Keyano College colleagues who either work, or have worked, at our community learning centre out there. 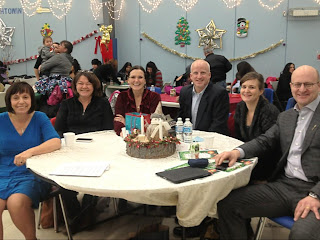 Choosing to sit at the back of the room, able to see the entire room, I observed a curious tradition that was playing itself out throughout the hall.  Each family had a big box of Christmas cards. During the hour-long school presentation, the matriarchs (mostly) were intently crafting greetings to friends and family who had gathered for the concert, celebration and feast.  As the cards were completed, they would send the young people around making deliveries.  By the time supper rolled around, Linda had quite a pile in front of her.

"I have to ask," I said to Linda, leaning over the table and whispering.  "Do people actually take the time to write a message?"

She looked up, smiled, and said "Yes, most of them actually do."

There was a lot of love in that hall last night, well over a hundred people, and a sense of family and community that was beautiful to experience and see.
Email Post