I've learned a lot of things about United Way in my short three months with the organization.  You'd think as a former municipal councillor and long-time community volunteer that I'd have known more, but the truth is that the learning curve has been huge and inspiring. 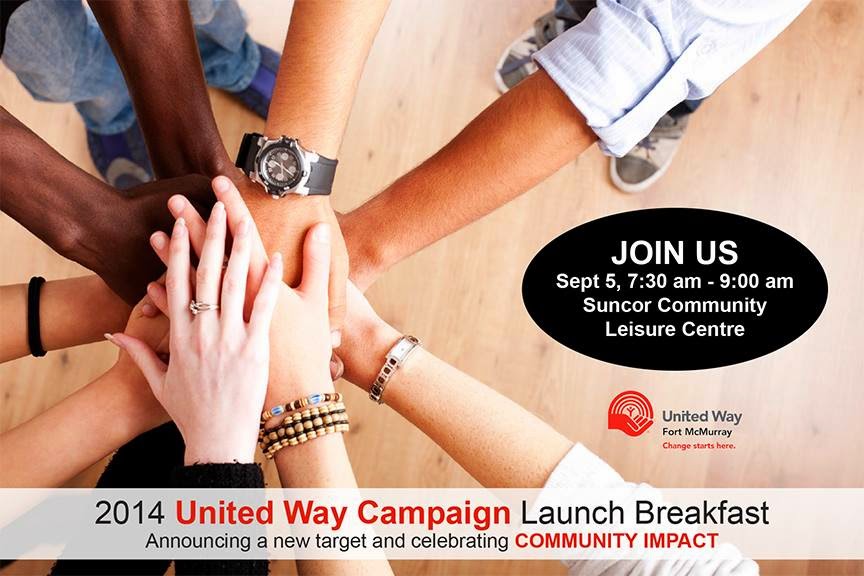 Today, we officially launch our annual Community Campaign, 10 weeks when thousands of volunteers go canvassing and put on special events to raise millions of dollars.  It is these dollars that sustain and support agencies that create community impact every single day.  They look after our children, adults having a hard time moving forward, families and seniors.  They provide services, resources, care and attention for those who need it.  THAT is what the United Way Community Campaign is all about:  it's about people, and "doing the right thing," as was so eloquently said by Ben Dutton, President of the UW Board.

I've been going to the United Way Kick-Off events for almost two decades.  The event is always filled with energy, excitement and anticipation about what the number is going the be - the new target.  A goal is important, there is no question about that, but understanding the reasons why supporting the United Way Community Campaign is a good thing is even more important.

I've been inspired by the passion and understanding that our many leaders from our workplace campaign teams bring to the table.  They get it.  They've been on a Seeing Is Believing tour - in many cases, more than one. They've done a Days of Caring event - giving extra help to agencies where and when it makes an amazing difference.  And they have a love for this community and region that underpins their efforts.  You'll meet many of them today at the breakfast that starts at 7:30 am at the Suncor Community Leisure Centre.

This is a come one, come all event.  Breakfast is by donation - whatever you feel inspired to give.  We have United Way t-shirts and scarves to give away and have you wear. We really want you to be in the picture.

For the first time ever, we're going to create a Community Campaign portrait.  Hundreds of people will be in the frame as we count down to the big reveal of the new target.  It is that image we will want to share with people around the world, an image that will illustrate why we are the most generous United Way campaign on a per capita basis in all of Canada, and have been for the last 8 years:  energy, enthusiasm, and a passion for people.  We care, and this morning we're going to celebrate that intrinsic fact about Wood Buffalo.

Volunteers from the Golden Years Society will be serving up breakfast starting at 7:30 am, we'll have some live music on the stage from Dave Martin, Adams Honor and Sean1MC, a short program will happen at 8 am, and we'll get everyone on or around the stage about 8:30 am for the big countdown and portrait.  Join us and help us kick-off this campaign with a bang.
Email Post