When Dylan and I were at Mindcamp in August, we saw a lot of examples of awesome ice breakers and games to bring a group together.  One of my favourites was the "pass the energy" exercise we did with the bananas (conference helpers).  You stand in a circle and one person starts by doing one clap and throwing an invisible ball of energy to another person.  The next thing you know, invisible balls of energy are being tossed hither and thither.  Layers and complexities get added to this game by starting new themes that intersect with one another.  We did animal names, vegetables and a third element that I don't remember.

The other ice breaker that I loved was introduced by Cora from Ireland.  She called it Marker.  Again, you sit or stand in a circle, and one person begins by holding a marker.

"Hi. My name is Cora. I got the marker from Russell and I'm passing the marker to Bob."

We were a group of about 30 when we did this exercise for real.  I managed to learn the names of all the participants and remembered them throughout the remainder of the conference.

Going into yesterday's Community Registration Day Breakfast, I wanted to do something that got people moving and connected to somebody new.  Here is what I did in four easy steps: 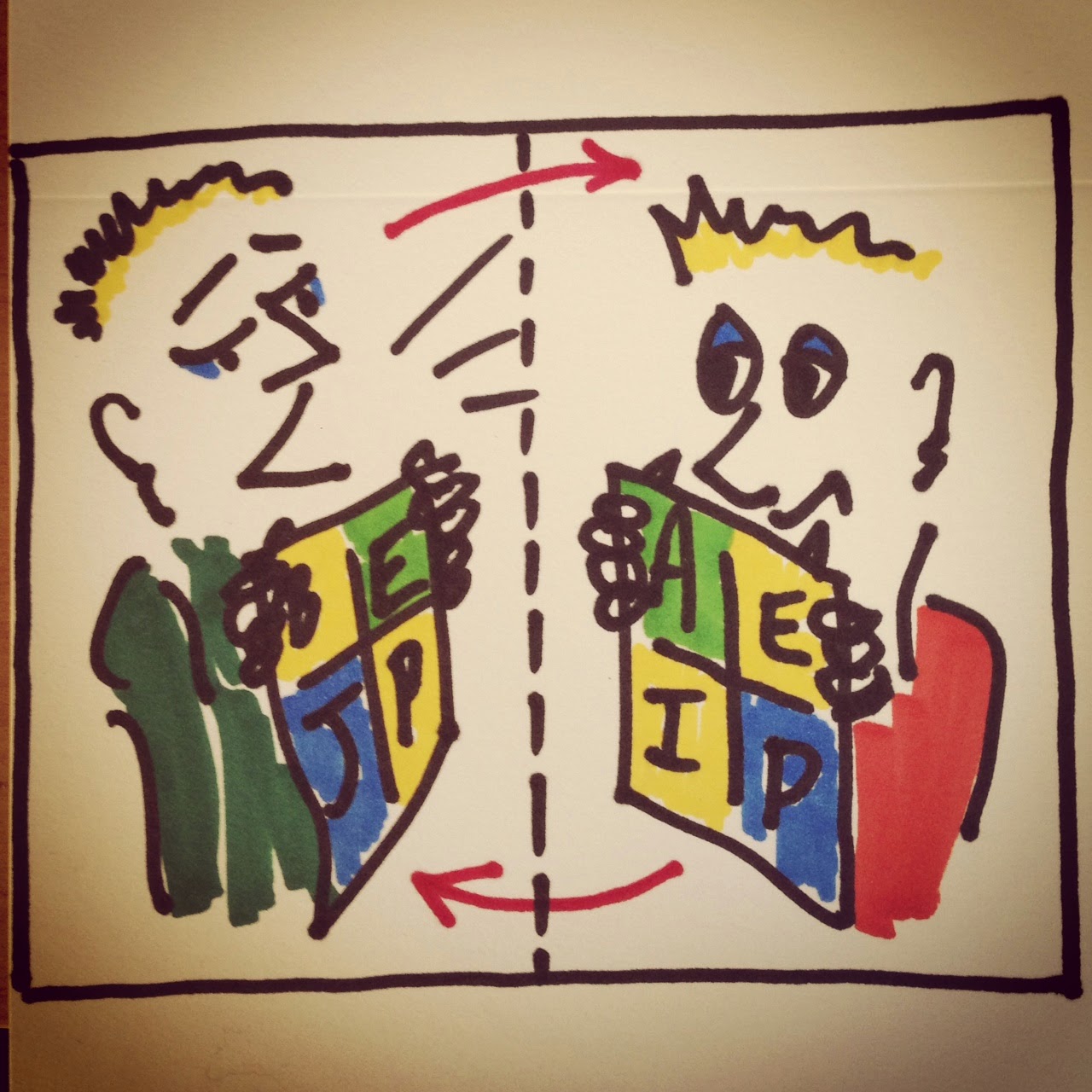 Step One: Focus the room

I asked everyone to be completely silent and to make eye contact with as many people in the room as possible.  This does several things.  It also helps them become more aware of the room and who's in it.  It also gives them a pre-inventory of who they know and who they don't.

"How many people know 75% of the people in the room?" (2 hands went up - that had never happened before)

"Awesome.  Then this next part is going to work great."

Step Three:  Filling out the quadrants

Prior to the start of the session, a sheet of paper with four quadrants had been placed at every seat.  Participants were instructed (several times for effect) to select the letter for each quadrant that resonates the most with them and to write it nice and big so others can see it.  Here were their choices:

I instructed participants to leave their table and find someone who shares at least two letters in common.  Once they found a partner they were to introduce each other, then share a little about the things they had in common (build trust, connection), and one thing about a category that they didn't have in common.

The room lit up immediately, and within seconds strangers were meeting and having animated discussions.  Other folks had a harder time finding their pair and wandered about for a few minutes, at which point I instructed the stragglers to find someone with at least one letter in common.

I always struggle with how long to let the conversations go on for as they appear to be having so much fun.  But pulling them out when the energy is spiked is the best way to leverage it for what lies ahead.

The categories and the choices can be completely adapted to the audience.  The materials are minimal: one sheet of paper with four quadrants and a marker or pen for each person in the room.

I'm sure something like this has been done before, but I made up this particular iteration.  What should I call it?