It could happen to you 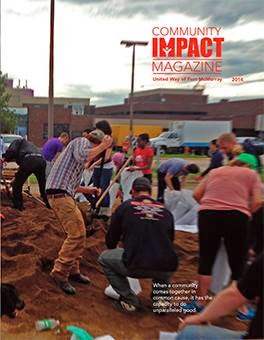 Imagine going to bed tonight, secure in the knowledge that you are enjoying the comforts of a prosperous life, a healthy oil sands salary, secure job, lots of friends and a bright future.  Imagine waking up in the middle of the night realizing that your condominium complex was going up in flames, that the alarm system had failed to work, and that you had seconds to get out.  Imagine that outside it was the middle of winter and that all you had on was a pair of shorts and a hoodie.

For Lori McDaniel, co-chair of the Suncor United Way Campaign, this scenario hits pretty close to home as it is exactly what happened to her in February 2012.

"There were a bunch of us that barely got out," she shared at a workplace campaign chairs meeting. "I was standing there in the cold with nothing.  It wasn't the building owners that were there for us, it was United Way funded agencies.  They arrived to help almost immediately."

With no possessions, no wallet, no keys, Lori, along with hundreds of others, was all of sudden cast into the arms of emergency services personnel and agencies who dropped whatever they were doing to help.

"It was amazing how quickly they had set up an emergency shelter at Holy Trinity," said McDaniel.  "With no warning and in an instant I went from having everything to having nothing.  All of a sudden I needed the services that this Community Campaign raises money for.  It happened to me; it could happen to you."

The emotional connection to those frantic moments and the displaced days that followed was evident as she shared her story to the small group of us riveted in the Redpoll Centre boardroom.

"Tell that story," she said.  "Any of us could need the services provided by any number of the agencies that are reliant on United Way funding to operate.  While we're in a position to give, we should do so.  That's why I am so passionate about being a part of this campaign."

As I sit here thinking of my family and what would happen to us if we lost everything tonight, the reasons for giving come into crystal clear focus.  There are people in our community who are in that position right now.  There are others who could be in that position tomorrow. Those are reasons enough, but bringing it home to what we would do if we lost everything really packs a punch.

"I am happy to be a part of the change that starts here," she said.  "We should all count ourselves fortunate if we've been spared the tougher lessons in life.  But we should never forget that one of these days, we might need help from selfless strangers."