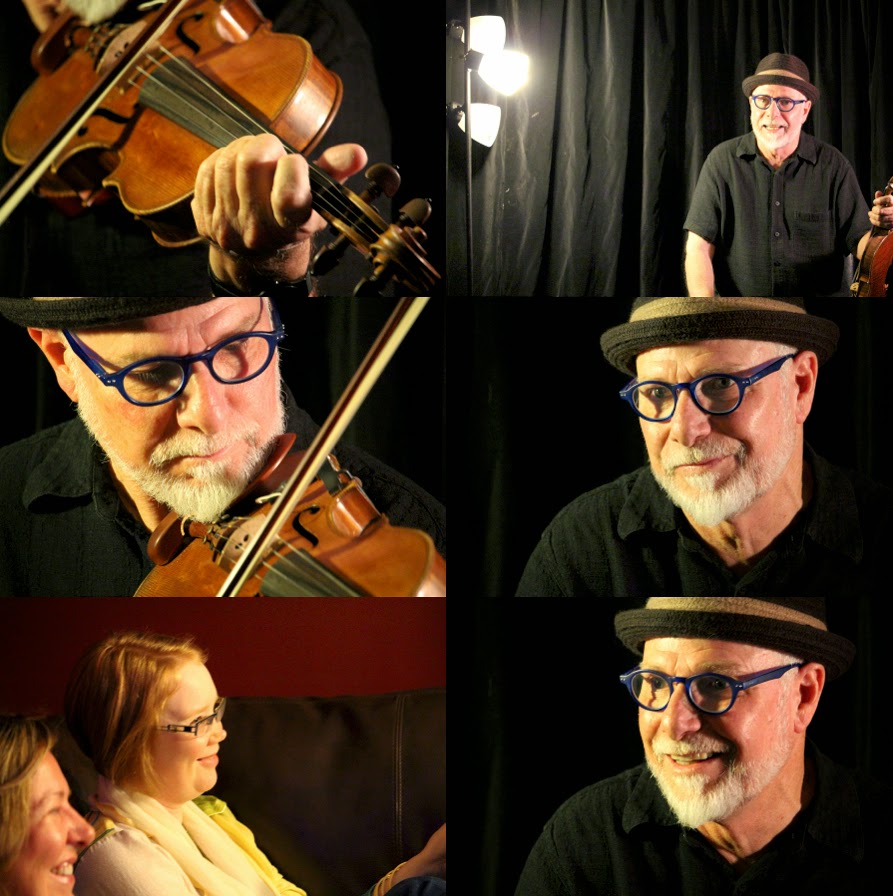 Matt Landry had been trying to get me out to one of his house concerts for a long time.  He finally succeeded last night as Heather and I went up to his home for a lovely evening of music with Louisiana based fiddle player, singer and storyteller David Greely.

Being a total house concert virgin, I had no idea what to expect.  I even asked a bunch of dumb questions like whether we needed to bring our own drinks, snacks and that sort of thing.  In my mind, I was picturing a quaint little cash bar off in the kitchen nook.  For the record, and in case you get invited to a house concert, it was BYOB, and totally casual and welcoming.

We arrived spot on the time he said to be there, the second guests to arrive, and visited out in the garage for the first hour as more guests steadily arrived.  It gave me a chance to admire in person some of Aileen's paintings (Matt's wife) and play with their beautiful dogs.

"What do you do for a living?" I asked Matt.

"What do you mean by automation systems?" I asked.

It was at that point he pulled out his iPad and demonstrated. Everything is controlled remotely: the door locks, the outside lights, inside lights, music - everything!

"It's complicated to put together, but totally worth it," he said, glowing with the opportunity to share one of his passions - technology.

As guests continued to arrive, David Greely started mingling and shared a little bit about his home near Lafayette.

"Is it swampy over there?" I asked.

"It certainly is," he said.  "It's the one place in the world where you can go kayaking through the forest."

I left David to visit with Kyle Harrietha, a regular patron of this house concert series, while I went to refresh my drink.  By 8:15, everyone grabbed a spot in the small living room - on sofas, stools and chairs - as the concert began. 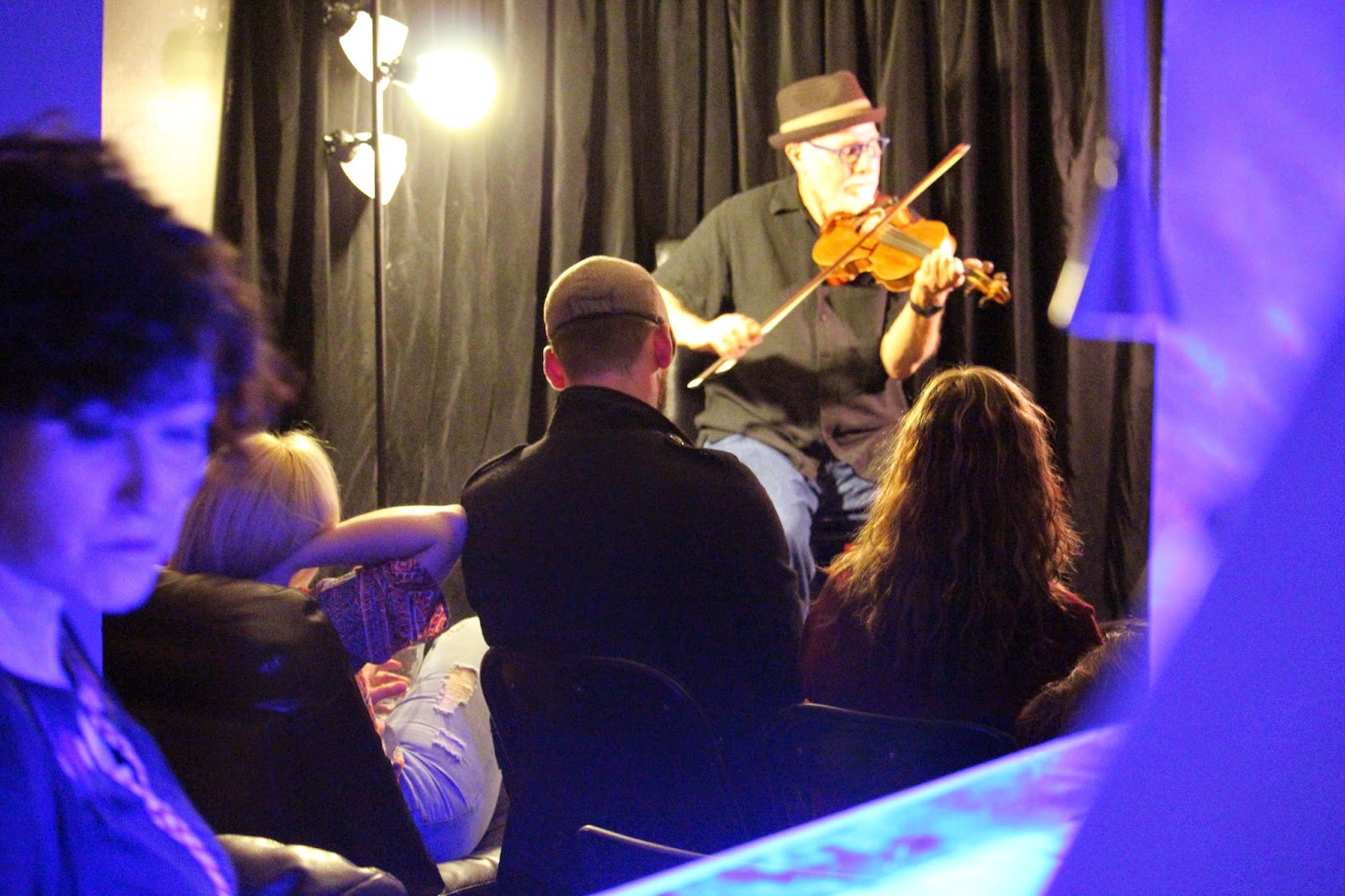 Sitting on a tiny triangular stage set off by a set of black drapes in the corner and a couple of light stands, David spent the next hour captivating us with his Cajun fiddle playing, stories of his ancestors and the role that music played in their culture, and several French songs handed down through the generations. 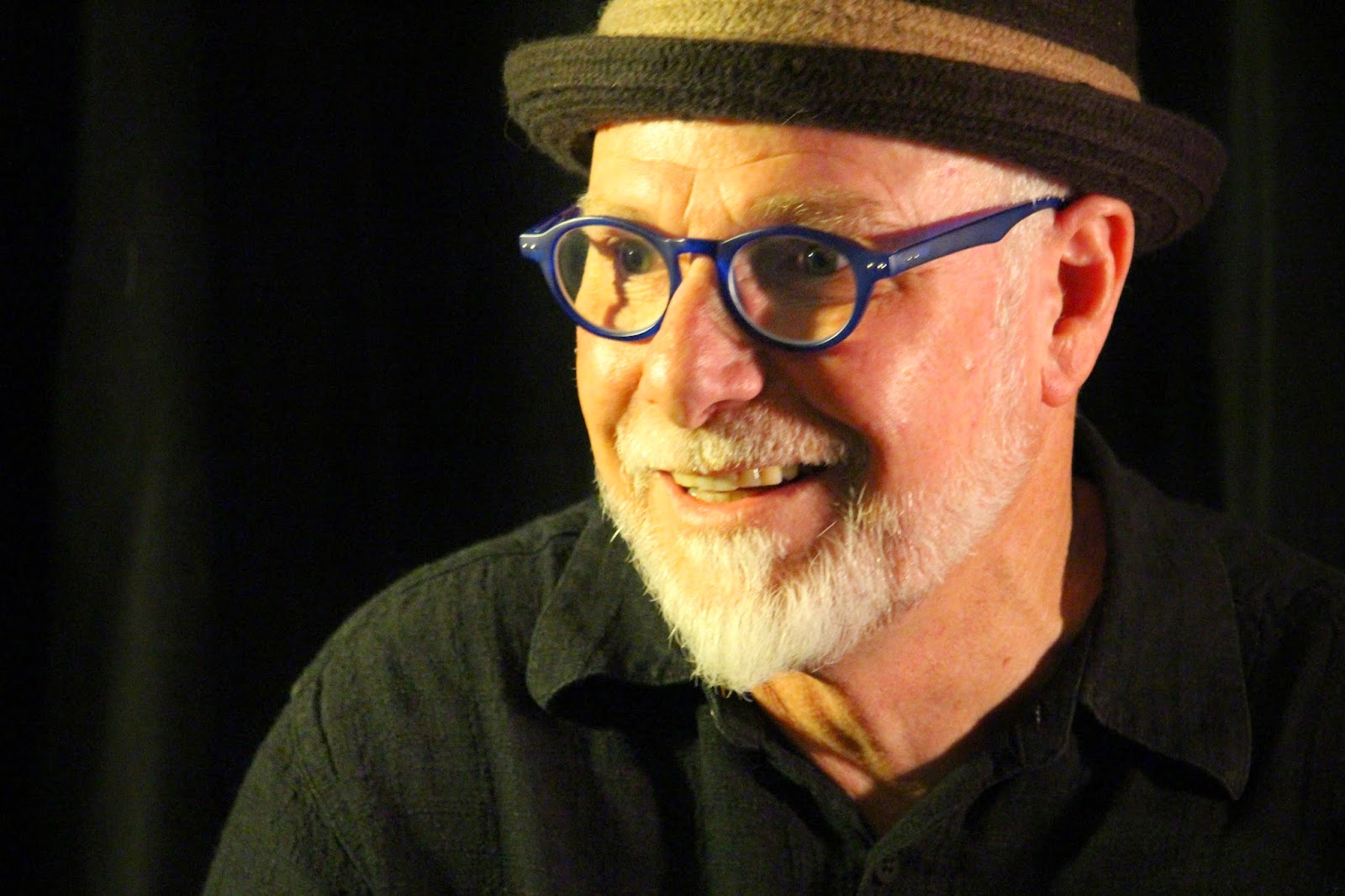 He described how they would have house parties down in Louisiana, not terribly dissimilar to what we experienced last night.  It was a family affair, complete with children - there were several with at Matt's place, too.  They would have the kids in a different room, sing a couple of fais dodos (lullabies) to settle them for the night. 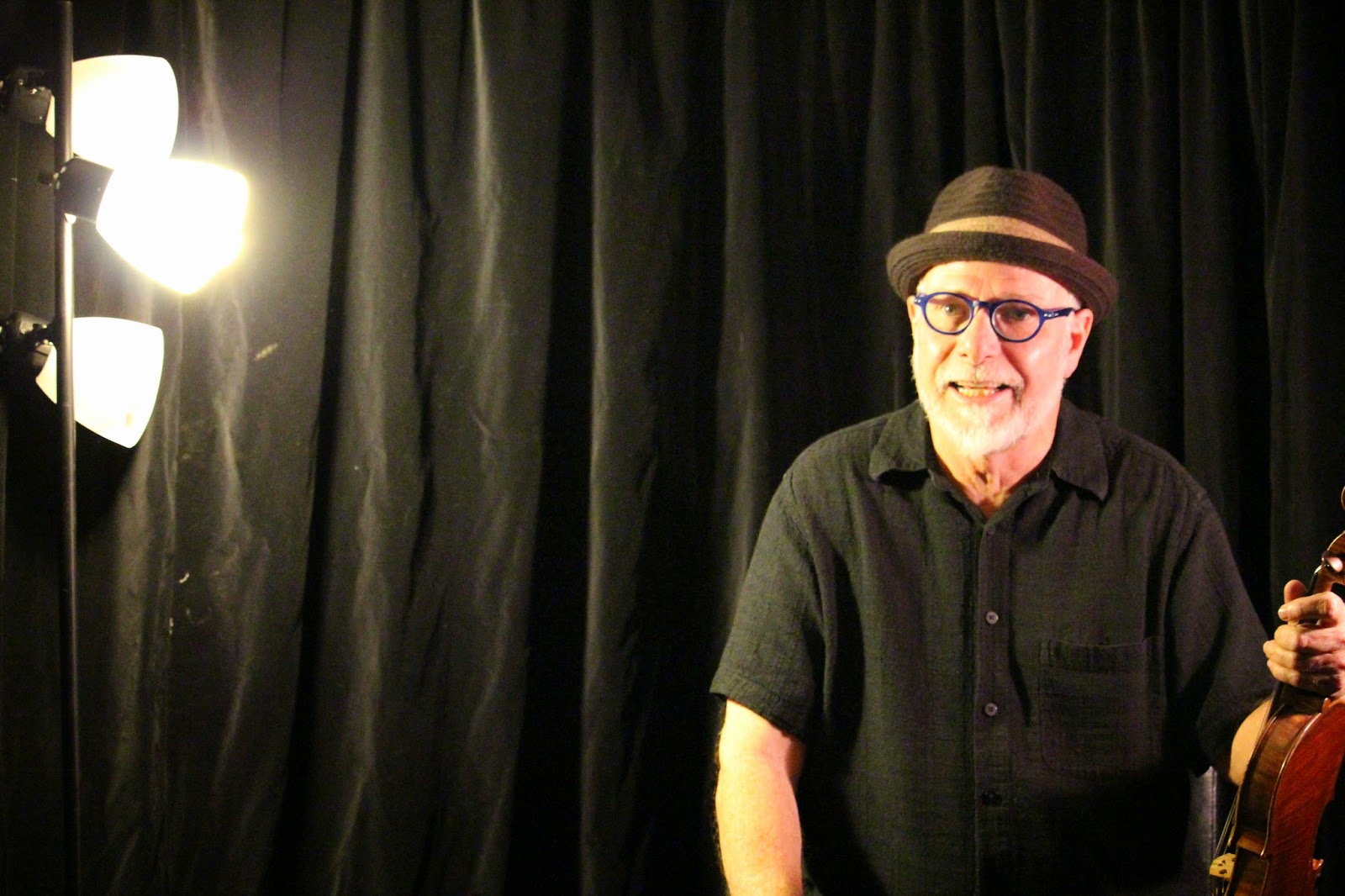 "Then they'd go into the main room of the house," he shared, "push the dining room table against the wall and move all the furniture to make room for dancing.  The fiddle players - there would be usually two: one playing rhythm and the other melody - would use the table as a stage and away they'd go, playing and dancing all night." 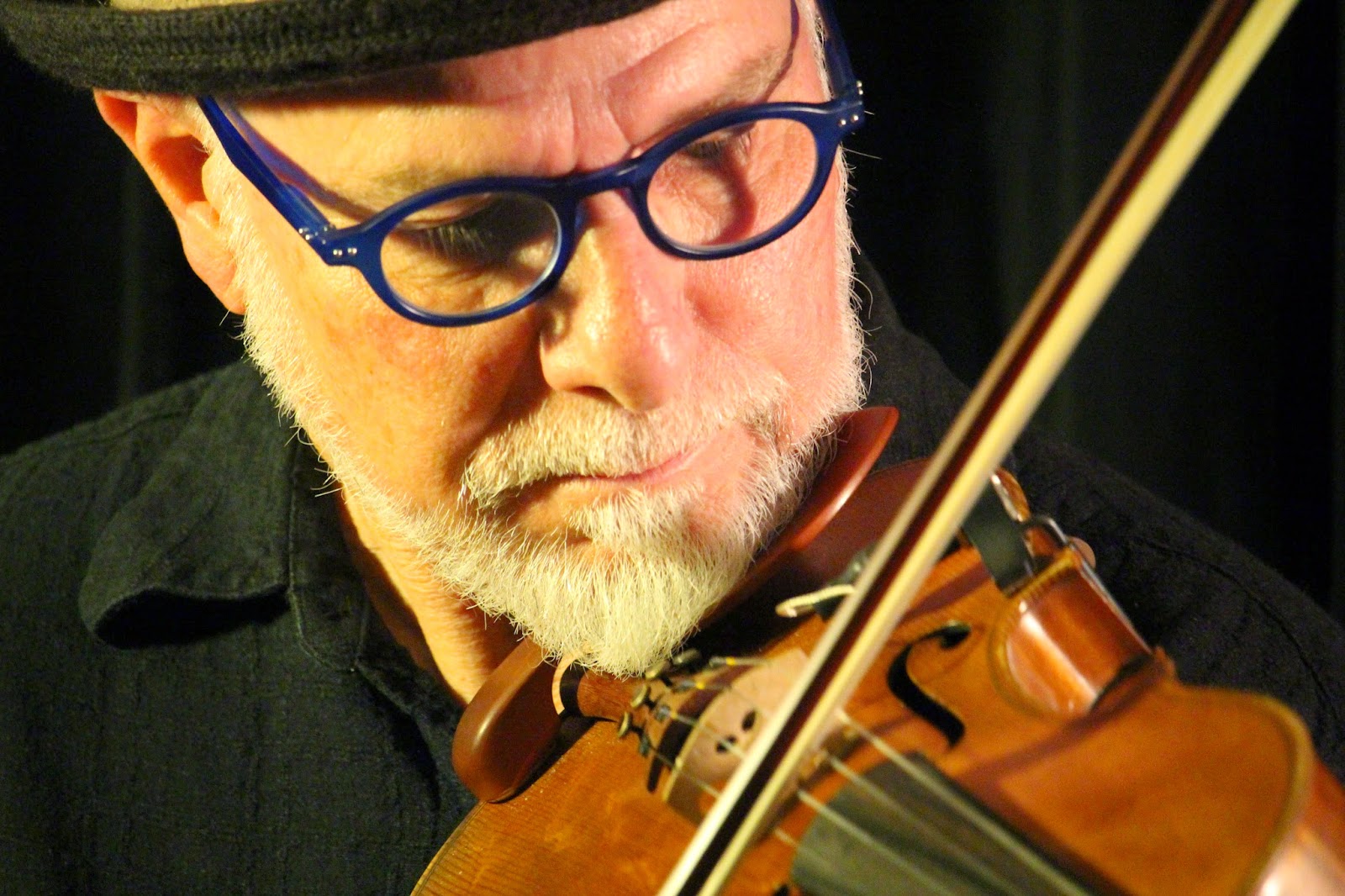 Intimate, one hundred percent acoustic, and unforgettable, this house concert experience was wonderful from tip to tail.  If you ever get a chance to go to one, don't let the opportunity pass you by.