The pleasure of Taylor's company

I have had the pleasure of Taylor Donald's company in the studio for a number of days as he reignited his passion for art.  An oil sands worker and a long-time McMurray resident, Taylor has had the amazing opportunity to see works of the masters up close and personal.  As a young fellow, he travelled to some of the most prestigious museums in Europe and visited many of the homes where these world-changing artists lived.  He also pursued art education before diving into his career and beginning to build a life for himself and his lovely wife Lindsey.

Taylor - then a stranger - reached out to me before Christmas enquiring about potential workshop dates.  Unfortunately, nothing we had scheduled worked with his schedule.  So, I just put out an open invitation for him to join me in Birdsong Studio any time; I was spending lots of hours in there trying to complete as many Christmas orders as possible.  It was messy, but there was room for him to start to play with canvas, brushes and paint.

He showed up one morning, introduced himself, and settled in.  Thumbing through my large stack of reference photos, he zeroed in on a subject that was very familiar to me, Johnny Depp as Edward Scissorhands. 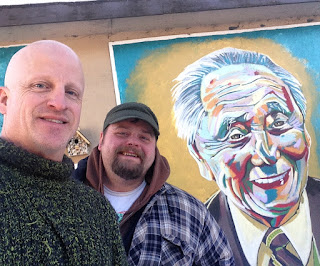 Falling into old patterns, Taylor felt like white-washing the canvas several times.  But, he stuck with it, trusted the process, and started moving the portrait in a great direction.  However, it became clear that his frustration level was rising, at which point I offered to help.

"What do you think of this idea," I said, knowing that he really wanted to leave our three sessions together with a finished painting.  "If you hit a wall, let me paint for five minutes and see where it goes.  It would be like a collaboration project."

In a lot of ways I didn't think he would take me up on the suggestion, but I felt the need to offer, as I knew he was so close to having a great portrait.  His eyes lit up and we began a painting partnership.  He kept painting until he reached his next wall, at which point he asked "Can I have my five minutes now?"

I got up from my seat and whatever project I was working on and took a minute to plan my strategy.  Five minutes was not a long time, but I wanted to figure out in advance which colours I needed on my palette as the time would zoom by.  I needed to do some quick work to make sure that when he came back into the studio from taking a fresh air break, he would see a difference,

"On your marks, get set, go," said Taylor, as he started the timer on his phone and went outside.

Because he had done such great work, my part was easy, and in those brief minutes, it was easy to do what I needed to do.

He came back in and didn't look at the canvas until the time was up.

I put down my brush and walked back to my own easel.

"Whaaaaaaa?" said Taylor.  I don't remember the exact words he said after his initial reaction, but the sense of it was that he now saw Johnny Depp as Edward Scissorhands clearly and distinctly. 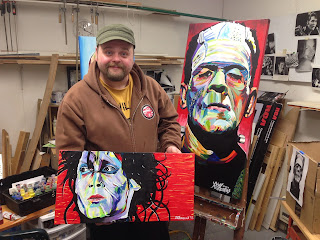 Before the project was over, I did another five minutes and then a final 10 right near the end.  Ninety-five percent of the painting was done by Taylor, who had picked up the brush for the first time in years. 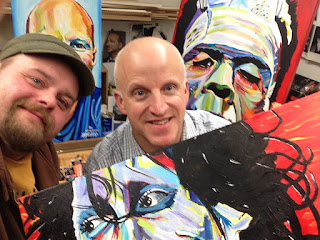 We went through a similar process with Taylor's second project, a portrait of Pablo Picasso, though he got much farther along in the process before calling for his first five minutes. 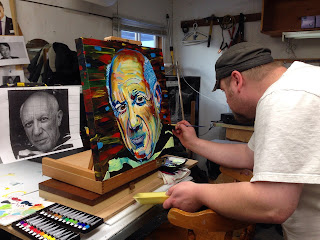 Melba Seto was the first person to hang out in the studio and paint with me; Taylor was the second; and Heather was the third, joining me for a few hours yesterday.  I love the energy that each has brought to the space and my own process.

Melba created a lovely video-blog from the time she spent with me.

Taylor, who began his time in the studio as a stranger, is now a friend.  While we painted, we talked, shared stories and ideas. 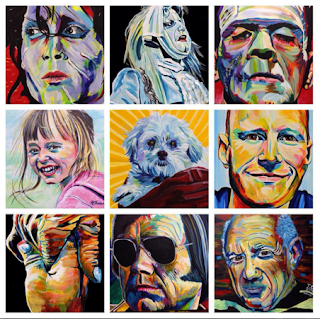 In the process, some beautiful paintings have been created and Taylor has catalyzed a love for creation that is going to only grow and evolve.  I'm deeply grateful for the pleasure of his company and his invitation to collaborate in a small way with his work. 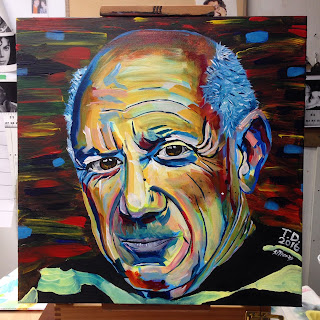