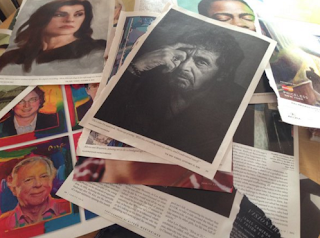 I am concurrently trying to lighten the weight I carry around and the weight that surrounds me.  The process of doing both at the same time feels great,  but life has a way of getting in the way.  Let me explain.

When I'm 100 percent in routine, losing weight and sticking to other resolutions is easy.  I create a pattern that works and stick with it.  However, this has been one of those weeks when I've been bumped from my regular routine to participate in a number of very important things.

On Wednesday evening I joined a group of Leadership Wood Buffalo alums for a three-hour workshop with Colin Funk about powerful expression.  Organizers provided a lovely meal from Mitchell's as part of the experience, though the marvellous sunshine bread was a decadent deviation from my eating program.

Yesterday was Heather's birthday.  I had this notion of gifting her with a love shower (not the kind of shower you might be picturing), expressions of love and appreciation offered up on Facebook by her many friends and clients before she woke up.  The effort was a great success and she spent a good part of the day absorbing the messages and responding to many.  In the evening, we then indulged with another decadent deviation at Ristorante Cosa Nostra.  I'm not even bother to go on the weigh scale this morning.  That cannoli was so incredibly good, but must have contained a million calories.

I haven't been able to paint in two full days, my longest stretch of not painting in months.  Painting is part of my pattern, my way of sorting out my world, internally and externally.  I'm anxious to get back out to the studio this afternoon.

So today is about getting back to the pattern.  We leave for a weekend excursion to Vancouver in a week, which give me exactly seven days to sneak back below 180 pounds and continue my minimalism 30-day challenge.

I've focused my culling efforts on my studio during the first five days of reducing the clutter that surrounds me.  I started with my Achilles heel which was my collection of magazines that I've been hoarding for years.  New Yorker, Vanity Fair, AlbertaViews, Alberta Venture and sundry periodicals have been stripped of inspiring images and ideas and relegated to the light blue recycling bin.  It is about as full as I can allow it to get, so for the next week I have to pick on other things that have migrated into my space over the years.  I'm glancing around trying to determine what needs to be next.

While there is a physical lightening that is ongoing through this process, there is also a metaphorical lightening happening as well.  The tethers that had connected me to all of these things have been snipped.  I also feel more comfortable in my space; I can breathe more easily, think more clearly.

The minimalism challenge is going to get harder as I go along, and I might end up migrating out to the studio to get through all 30 days.  At some point in the next few weeks, I'm going to run out of things to give away, recycle or trash from my study.  Meanwhile, I will continue my effort to slough off more pounds, with the ultimate objective of seeing the south side of 170 for the first time in over 25 years.