Two hits to the heart

The passing of David Bowie penetrated hearts in a way that was profound.  Social media lit up with warm thoughts, reflections and observations about the brilliance of this artist. 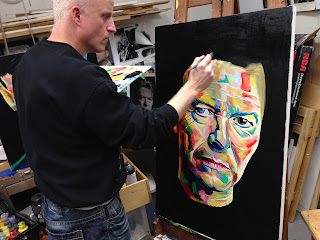 I painted him as my way of chronicling the event, as I had done previously with several other legends, both local and global.  When the inspiration strikes and the time allows, I try to finish the work on the same day, in the same way that journalists write stories and broadcasters quickly put together bio pieces.  In the space of time after someone's passing, there is an unmistakable energy in the world.  I think a little bit of that energy is imbued in my paintings.

Response to the David Bowie portrait was unlike any other piece that I have done, including the Robin Williams.  I'm glad I went with David Bowie the man, as opposed to one of his personae.  I've made that same choice with others - Ron Hynes, Michael Green and BB King among them.  Each of those paintings, in a variety of different ways, made their way to family and friends of the deceased.

Then Alan Rickman died.  My heart hurt in a completely different way.  I immediately went back to his work in Love Actually.  Others connected with him for his perfect portrayals of villains.  Like David Bowie, Rickman connected with millions of fans. 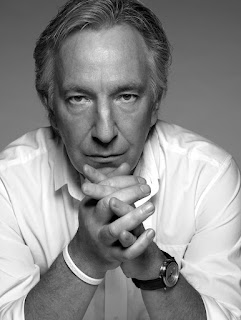 I had a limited amount of time to paint last night, not enough to get a solid jump into my next personal commission, but enough to memorialize the passing of Mr. Rickman.  My intention is to interpret the picture shown above, as I absolutely love its intensity.  It will become part of my "hands" series - a collection of portraits of subjects with their hands as an integral component of the composition.  However, I knew I didn't have enough time to pull this off.  So, I chose something slightly different. 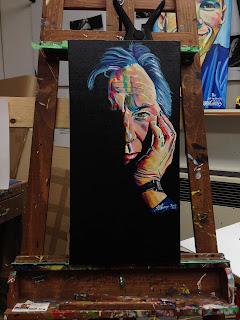 Some people write touching tributes in magazines, others produce poignant documentaries for television; I capture passings in a different way, using a blank canvas, brushes and paint.   Being able to do so is a great honour and joy.