A story in the Edmonton Journal about Fish Griwkowsky playing the "minimalism game" gave me a thought.  I'd been struggling with decluttering my spaces over the holidays, with very little success.  I'd pick up a stack of magazines - New Yorker, Maclean's, Vanity Fair and the like - fully intending to chuck them into the recycling container, but then hit a wall.  I couldn't do it; I've never been able to do it.

Maybe I just need structure, I thought to myself after seeing Fish's story.  A 30 day challenge would be a perfect vehicle to move me into the decluttering practice.  The concept would be that every day for 30 days I would select a thing, or a series of things, to a) give away, b) recycle, or c) trash.  Simple.  Most importantly, the action would have to be taken on that day.

I started with a big stack of New Yorker magazines.  I don't remember when or why I subscribed to this weekly, but I did.  They arrive, like clockwork, filled with great stories that I can't possibly get to.  Who the hell has time to read that much?  If I was retired with absolutely nothing to do, it would take me hours and hours to get through a single issue.  It is a fabulous collection of writings.

I thumbed quickly through each issue, ripping out pages that had an image that was interesting or inspiring in some way - there were about 10 - and then comfortably walked them out to the light blue recycling bin in the front yard. 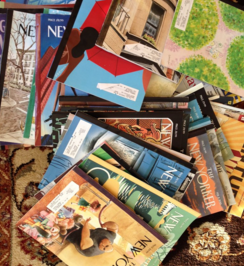 From magazines to miscellaneous cords, attachments, trinkets and do-dads, I will pick an item or collection of items, and take action.  My public accountability piece will be a daily tweet with a picture of what I'm dismissing from my world. I'm even going to attack my big memory box filled with news clippings, programs, and assorted paper bits that collectively represent a wide swatch of memories.....or maybe not.  That's what I have to figure out.  What is the criterion for labelling something a viable piece of memory worth keeping?

For instance, I likely have multiple copies of playbills from the shows we saw on Broadway in October.  Are they necessary for me?  Or, am I keeping them for the boys?  Hmmm?  I think the latter.  An answer just occurred to me to start two new boxes, one each for Dylan and Ben.  I can put stuff that I think might be of interest in each of those and let them decide what they want to keep down the road when they move out of the house.

But first, I need to move through hundreds of old magazines, going back about ten years.  I have a suspicion that our paper recycling bin is going to be rather full this week.
Email Post