As I scrolled through the thumbnails of all the paintings I did in 2017 - there are well over 200 - certain ones jumped out and sparked a memory or a feeling.

"Do you have a favourite?" is a question that often gets asked of me.  I don't.  However, there are several dozen generated over the last 3.5 years that I feel really good about.

I maintain a pretty basic website (www.russellthomas.ca) and use it as a place to store images of my paintings in chronological order. When you click on the link above, select the tab that says ART at the top. As you scroll down you will see some drawings, a few early acrylic paintings, followed by a few photos.  After that are all the wild colour portraits.....or.....most of them.  One of my New Year's tasks is to go through and figure out which ones are missing.

As you scroll down, down and down, you will find a moose.  That was the first painting of 2017.  In no particular order, here are 10 of my favourites, picked quickly as I scrolled through. 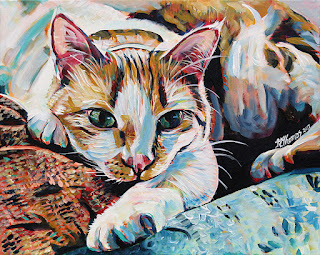 Tracy asked me to capture her cat Mr. Wimpy.  Cats can be challenging subjects, but the painting still catches my eye.  I was exceptionally happy with the result; I still am.

There is something Harry Potterish about this wise old owl that came out of a family painting workshop that I did last year. 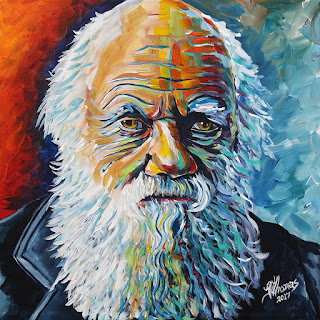 This venerable scientist kept me company for much of the year.  I love the colour palette on this one, inspired by an amazing artist friend of mine named Jordan Perkins from Castlegar.  Susan Lemcke scooped this one up during my recent online auction.

I did this portrait of the beautiful Marilyn Monroe during this fall's Talitha's Hope 4 a Cure fundraiser.  For the longest time, I thought it was going in completely the wrong direction, until I walked away and glanced back at it from across the crowded banquet room.  I was floored at what it looked like from a distance.  It reminded me that stepping away from a painting and getting a fresh perspective is a smart thing to do.

This canvas was in the rack in Birdsong Studio, half finished, waiting for both inspiration and time.  It returned to the easel in late March and came together beautifully.  The portrait now hangs in the office of one of my old friends from my radio days spent in Stettler, Alberta. 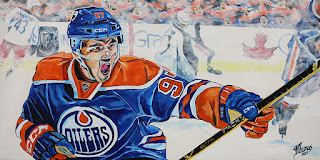 I originally thought that I would have four full hours to put this portrait together of Connor McDavid as part of the Alzheimer's Face-Off Luncheon in Edmonton.  However, the emcee shifted some things around and asked if I felt I could do it in three hours instead.  "Sure," I said, confident that I would be able to pull it off.  It ended up raising $18,000 for the Alzheimer's Society of Northern Alberta and NWT.  It was the largest price ever paid for one of my paintings. 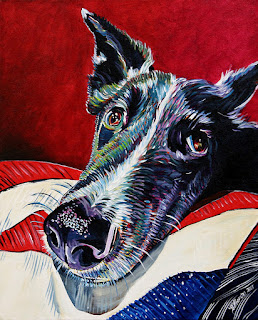 I can't tell you how many dog portraits that I did in 2017; there were a lot.  My deepest thanks goes to artist Eric Staub for providing the initial burst of inspiration that allowed me to discover the joy in painting these beautiful animals.  I could have picked several for this list, including Gunner and Suki, but I ended up going with Winston.  I love how this one came together. 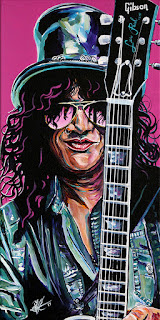 Once in awhile, I get asked to paint portraits of famous musicians.  This painting of Slash came together in such a beautiful way.  It also become a limited edition print that completely sold out, raising some funds for our charitable and humanitarian projects. 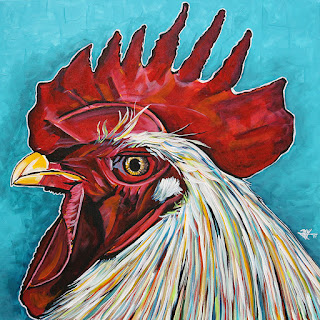 The one original painting that remains in my possession and hangs on the middle of the Birdsong Studio feature wall is the Cambodian Rooster.  This regal creature was strutting about the village in rural Cambodia where we participated in several house building projects.  I love the colouring in this one.  Others have commented about his eye, and how it draws them in. 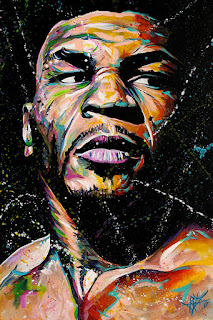 I had an overwhelming urge to return to a young image of Mike Tyson to close out the year.  Much like the large portrait I did of Tupac, I was in an intoxicating state of creative flow with this one.  It captures the fierceness of this young boxer who electrified the sports several decades ago.
Email Post