I have a limited time to write today, as we will head back out to the building site in about an hour.  As much of that time will include getting breakfast, that leaves about a half hour to capture thoughts about what turned out to be a very long but amazing day. 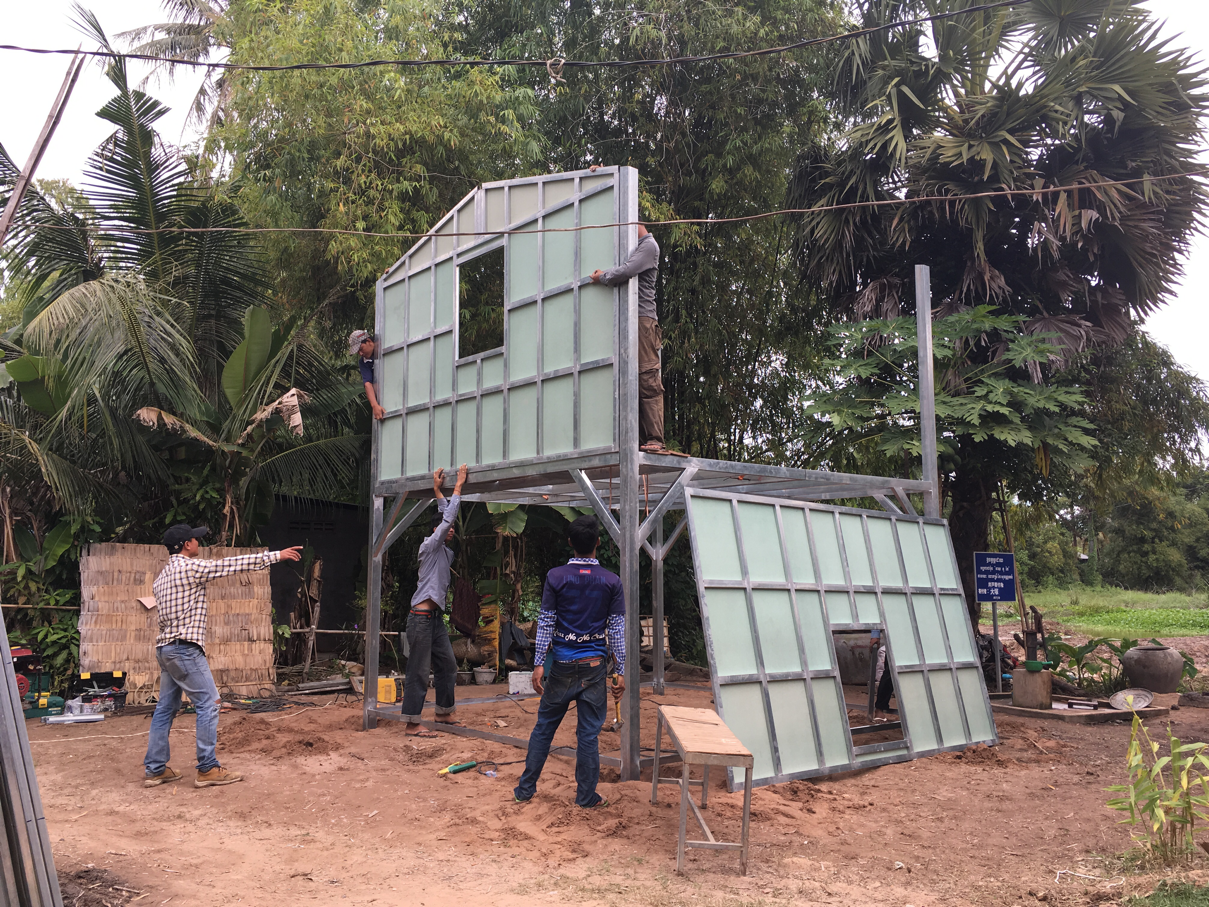 The crew from Phnom Phen had made quick work of Mern’s house first thing in the morning.  By the time we made it out there, they were already spot welding the various metal sections together. These prefabricated homes are somewhat cost effective and go up in a single day.  Stick built homes, while creating local employment, have a similar cost but take 4 to 5 days.  It’s a balance of local resources (labour), time and money. Lee Chandler and Kent Lissack do an extraordinary job juggling all the pieces. 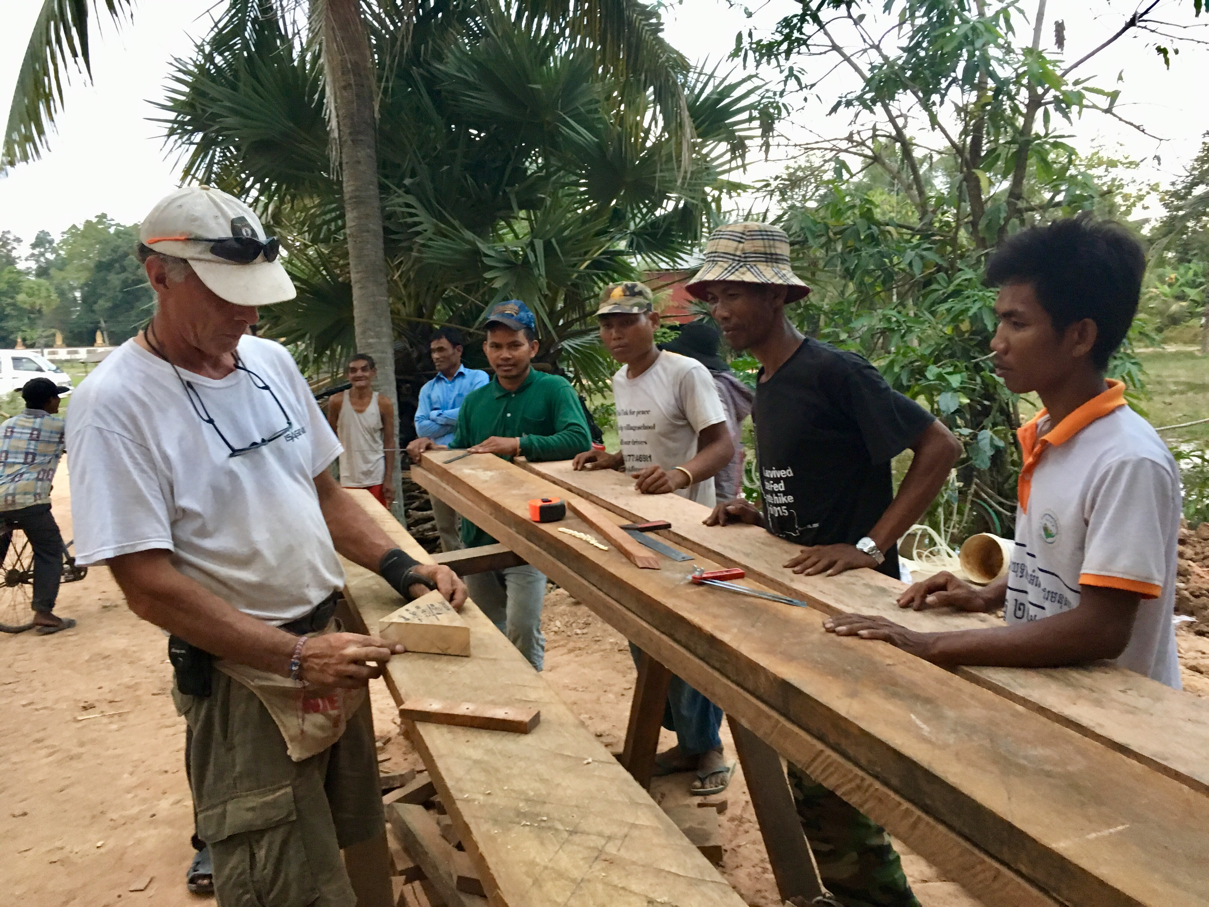 While Mern’s place was going up, I was figuring out a way to paint.  A panel of thatch was off to the side leaning against a tree.  I set my rustic canvas on one of the rails - it would make do as an easel - and found a small bench to sit on. 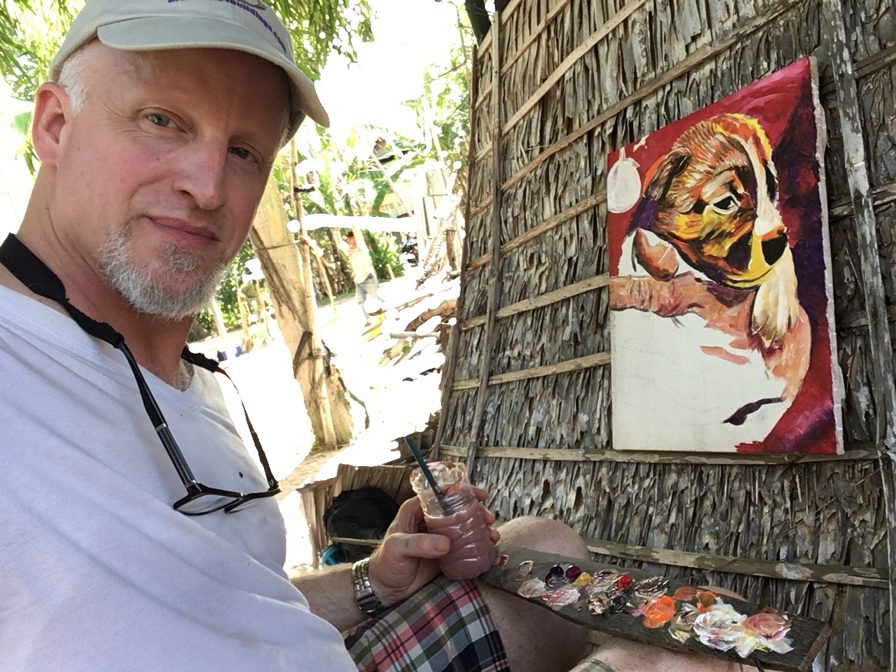 To clean my brushes I cut a water bottle in half and filled it with water from a nearby drainage ditch.  As I started drawing and eventually painting, I was surrounded by villagers.  Shortly, I realized that I needed something to wipe my brushes on.
“I need a cloth,“ I said to Silyoee, a 13 year old boy who was walking around trying out my camera.  “Anything will do: a rag, towel...anything.”
Even though his English was rudimentary at best, he came back with a beaten up old shirt. It was perfect.  This is one sharp kid! 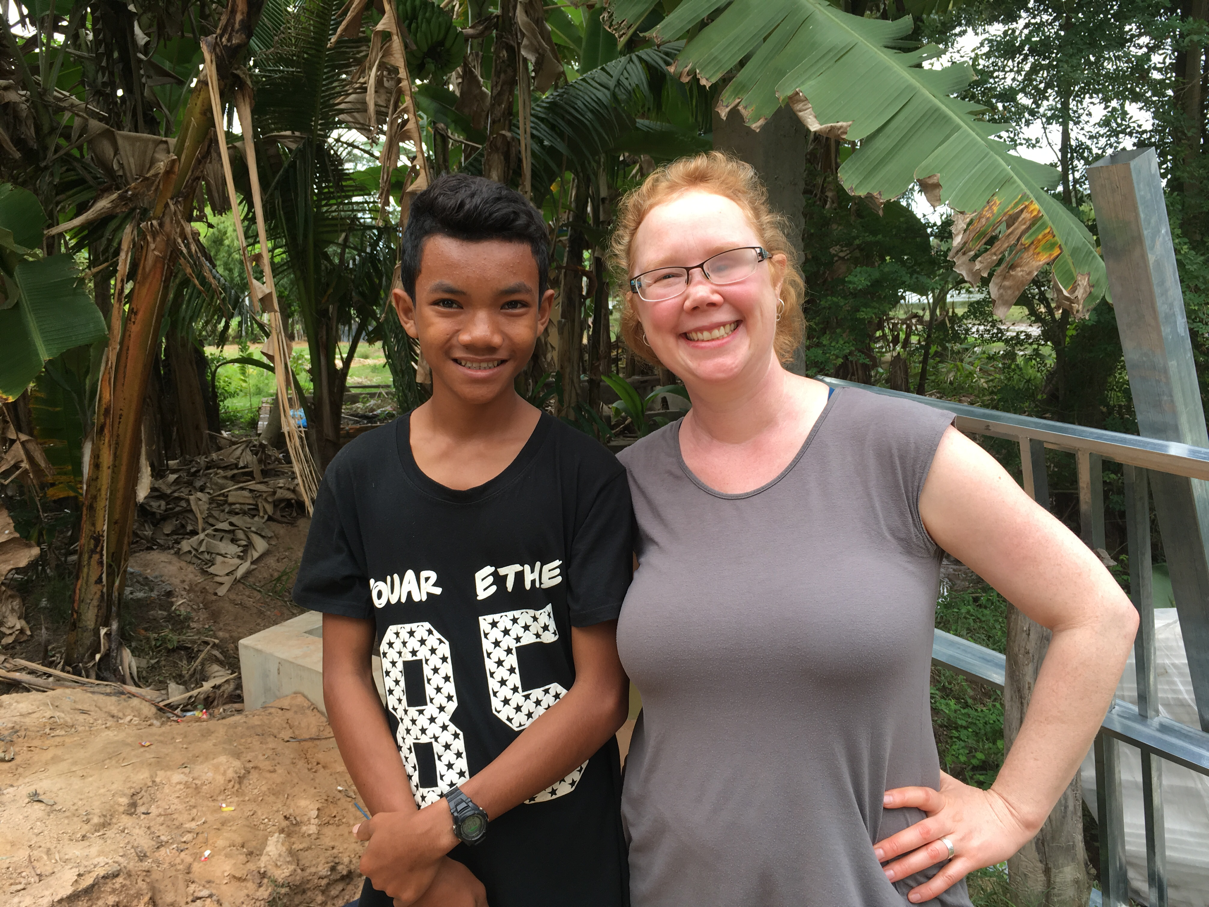 The sun emerged from the clouds and we had to shift the whole set up into a shaded area.  I knew I wouldn’t last in the bright Cambodian sun.  Everyone standing around at the time understood my dilemma and helped move me into a better position.
It is super challenging painting in any unknown environment.  It is especially challenging using tools that are unfamiliar.  I made this comparison with Mark and Allistair, the two amazing photographers on this trip:  “It would be like going from the camera you are using now to an old Kodak Instamatic.” 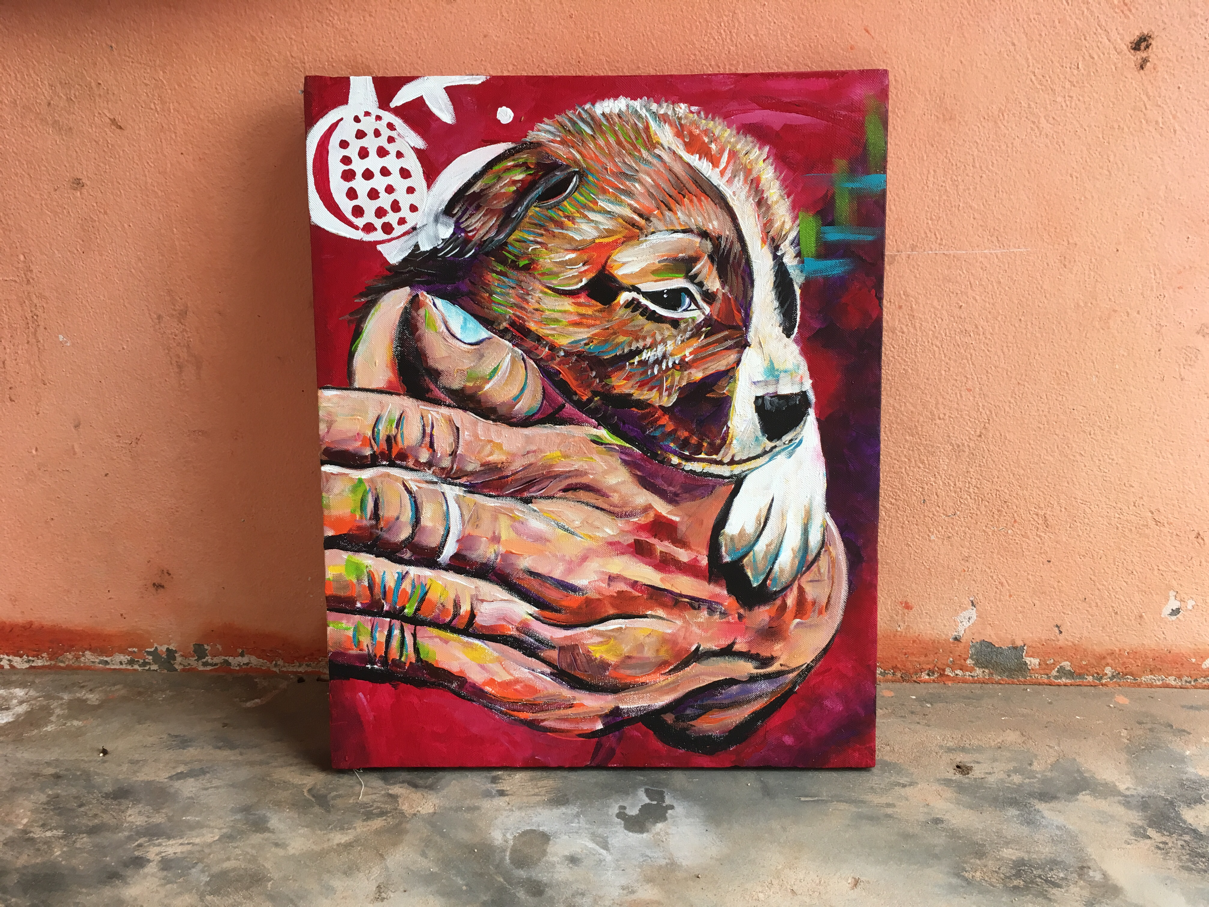 Perhaps that is a bit exaggerated; perhaps not.  The paint is a little heavier than I usually use, it is getting sucked into the cotton - I love the fact that Lee was able to source out locally made and very authentic Cambodian style canvas, and the temperature/humidity dries it out super fast.
By early afternoon I was spent and decided to complete the canvas in the comfort of my hotel room later in the week. I spent the rest of the day helping around the construction site, taking pictures of the locals and soaking in the vibes of rural Cambodian life. Our base of operations is under the home of the neighbour next to the location where two stick built homes are going up concurrently.  I had brought my painting back with me as I didn’t want Mern to see the finished product.  The kids decided to take the painting and make it their own plaything. I thought it was cool that they didn’t treat it as an untouchable object. 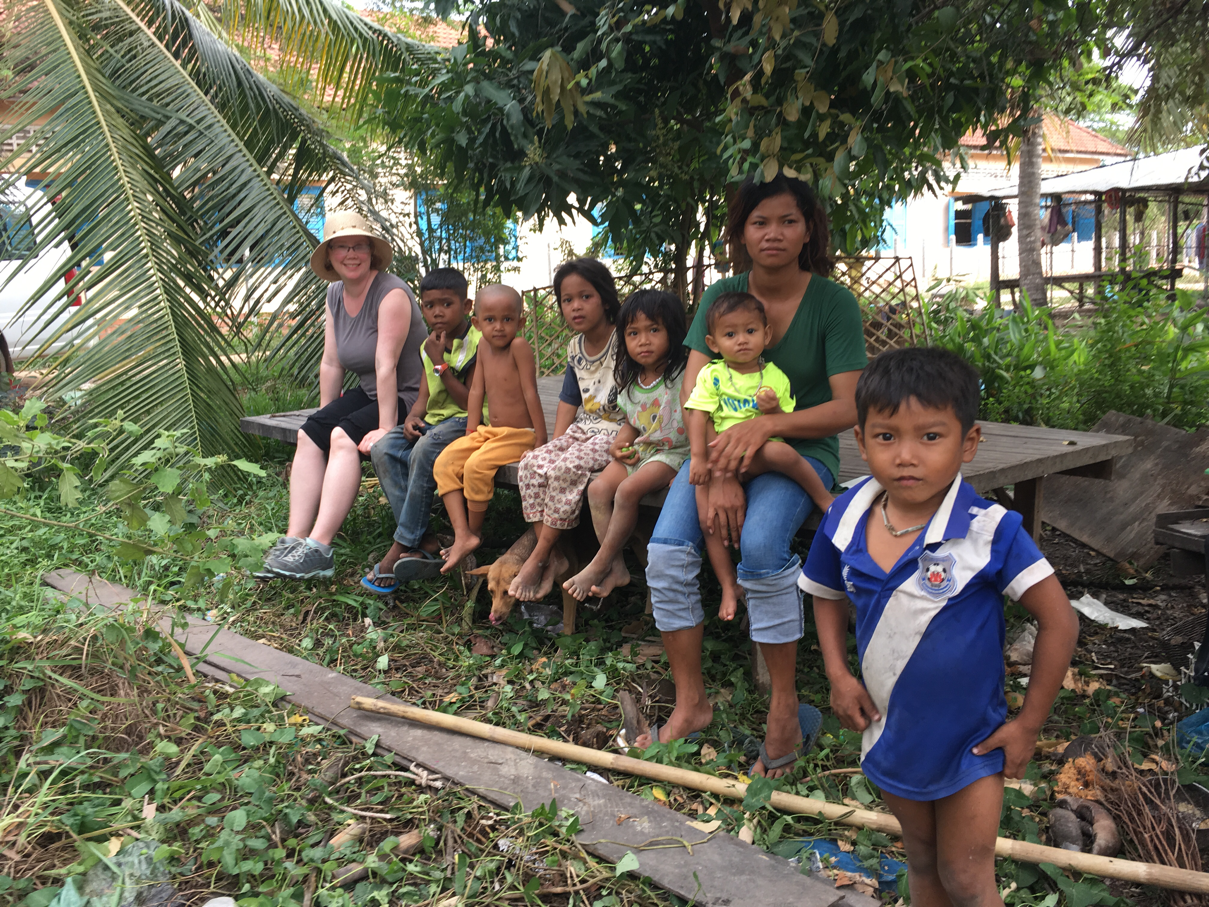 As the day came to a close we had one more task to complete: Poy Thou’s home had to be demolished to make way for the new home that would be going up the next day.  The kid in the foreground we lovingly call “No Pants”, because he always runs around with no pants. That information will become significant in tomorrow’s post. Remember that just a day earlier, Poy Thou had no idea that she would be getting a new house.  When I say that we demolished her house, how long do you think we’re talking?  Would you believe that within 30 minutes the site was completely cleared?  About 5 of us manually dismantled everything using hammers and pry bars.
Poy Thou was so grateful that she gave each of us a fresh coconut which had been hacked and tapped. Our bellies were most grateful for the natural nectar, and our hearts were full that this single mother of four, who has next to nothing, gave us such a beautiful gift. It was a day of meeting one of the goals I had set for myself on this trip: to get disgustingly dirty. To mark my accomplishment, I asked Heather to snap an end of day picture.
Email Post