After 700 painting, I have typical patterns that I use to create a new work.  The process starts with sketching out the subject, usually using the grid technique.  Then I either jump right into the subject or create the background.  Always, there is a methodical approach to allow my style to emerge from the canvas.

In the afternoon on Christmas Day, I wanted to do things a little differently, inspired by a comment by Herbie Hancock in an interview I once heard on CBC.  When he was with the Miles Davis Quintet, they collectively decided to do a show whereby they played against their instincts.  They would do the exact opposite to what they had been trained to do.  The result was fresh music, though at first they thought it was a mighty mess. 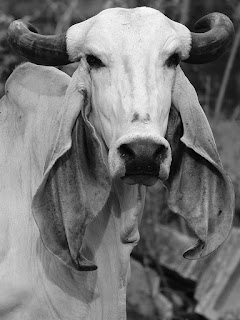 I chose a cow from Kanchanaburi as my subject.  I also had a nap before I got started.  In my sleep, I thought of the idea of sketching out the cow with a black Sharpie, then laying down wet and bright washes of paint.  This would allow the black lines to still be seen, but create an unusual and somewhat random starting point. 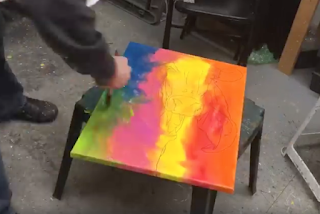 What followed was a strange journey to an unfamiliar land.  At first, I found it hard resisting my instincts and started creating somewhat of a literal background.  When that didn't work, I forced myself to go in a completely different (and painful) direction. 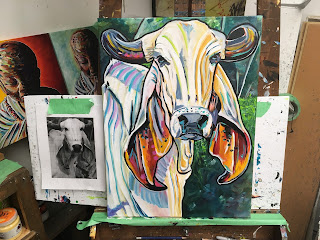 Nothing was feeling right. 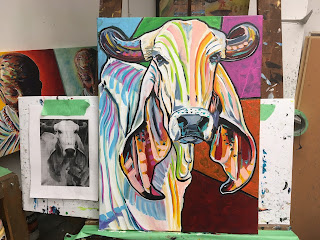 "It's going from bad to worse," I said to Heather during one of my visits to the house to refill my water glass. 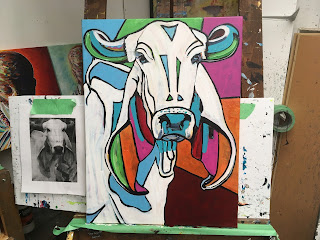 She glanced at the photo and kindly said something encouraging.

I went back and forth, up and down, trying different things.  It was during dinner that I had the epiphany to move everything into the blue spectrum. 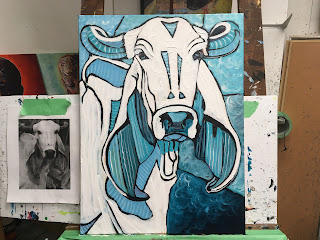 It's hard to see from the photo, but there is so much paint on the canvas, that there is a significant amount of texture.  I used that to my advantage and began emulating some of the lines in the body of the cow using ridges of paint.

I went from a place of being ready to whitewash my first canvas to having a finished product that is absolutely different from anything I have done to date and somewhat interesting.  Maybe I was influenced by the minus 30 temperatures outside, but it is somewhat counterintuitive to paint a cow from a tropical climate in a colour palette that is anything but warm. 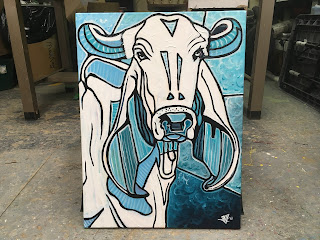 I signed the piece last night, but I'm going to spend a few minutes finishing it up this morning before diving into my next commission project.  I may add some snow flecks, just to enhance its magical quality.
Email Post