Wednesday was my day to put the finishing touches on Mern’s painting that will be presented to her, along with her house, on Saturday (It was originally scheduled for Friday, but instead, we will do four blessing ceremonies in a single day).  I could easily have set up in my hotel room or even in the courtyard of the small hotel, but neither idea felt right. I wanted to paint in the shade and I wanted to paint in a public place. 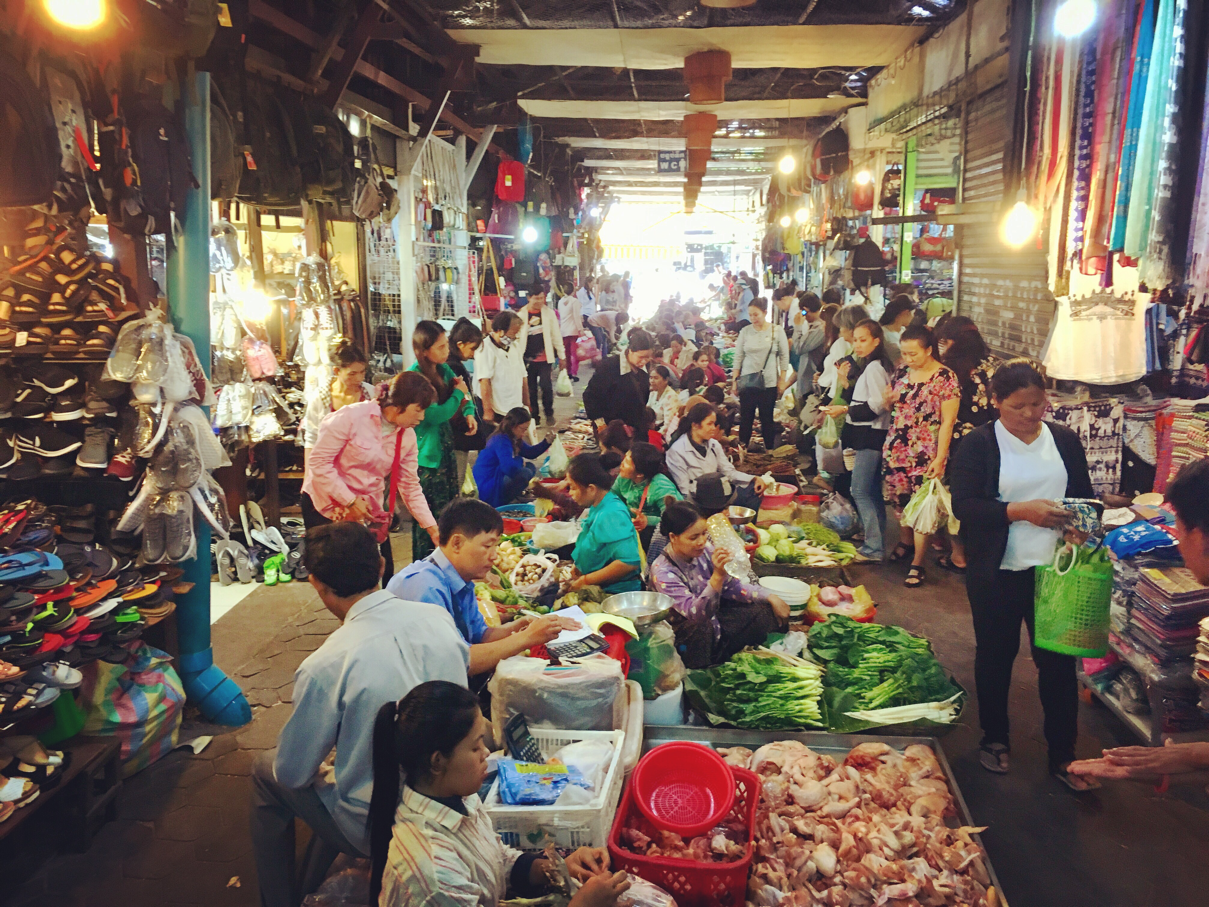 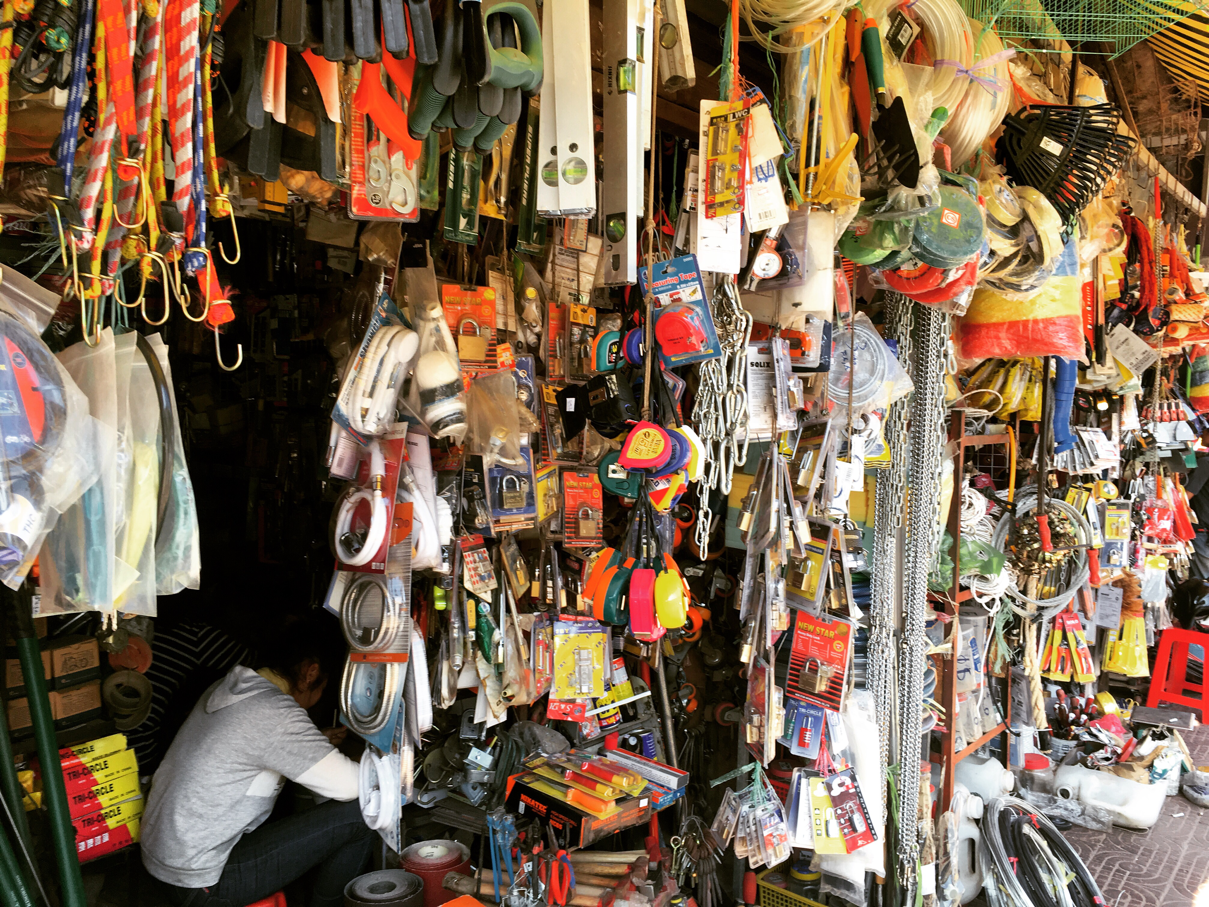 At one point, I found a vendor with a big stack of styrofoam plates, which I often use back home. I would have been happy offering her a good price for a handful. However, translating that I only wanted the plates to a food vendor who usually filled them up with food, was an exercise in futility, made extra useless because they hadn’t even opened for business yet.
We ended up buying bamboo plates from a local concession. $2.50. A bargain for the important purpose they serve.
I set up my stuff on a bench in the middle of the covered walking bridge: canvas leaning up against a beam, cut-off water bottle filled with river water to the left along with the crusty old shirt (rag) I brought back from the village and my selection of paints splayed out on my backpack.  I sat on the deck of the bridge and got to work. 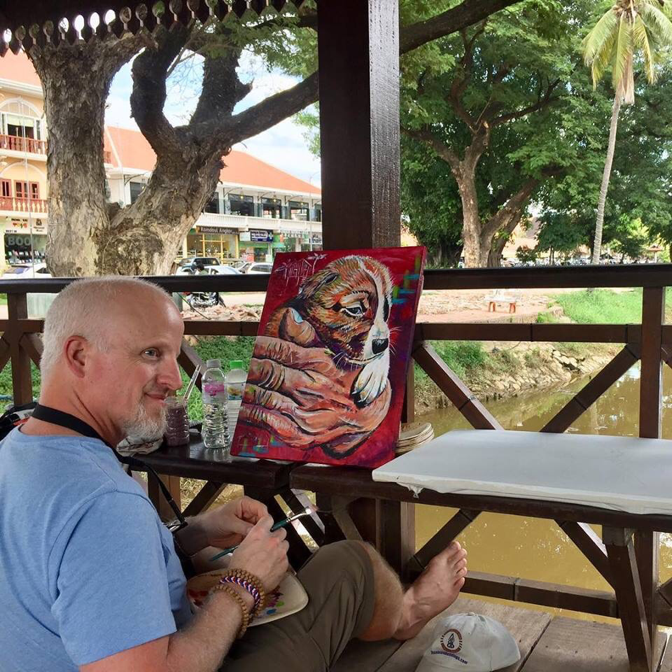 As I painted, some people stopped to watch.  It was mostly young Cambodians who took notice and stopped on their way by.  One guy started doing a Facebook Live video of me painting on the bridge. Long Waha stopped for a long while.  He is a teacher at a school in a very poor village near Siem Reap.  His English was exceptional, so we enjoyed a marvellous chat.  He was at the market to get supplies, food and clothes for his students.
The group of young teens that stopped by to watch were particularly interested.  I offered them each a business card featuring various pieces of art that I have done. Long Waha let me know that one fellow wanted to take two extra for his two brothers at home.
“Absolutely,” I said.  “That’s why I brought them.” 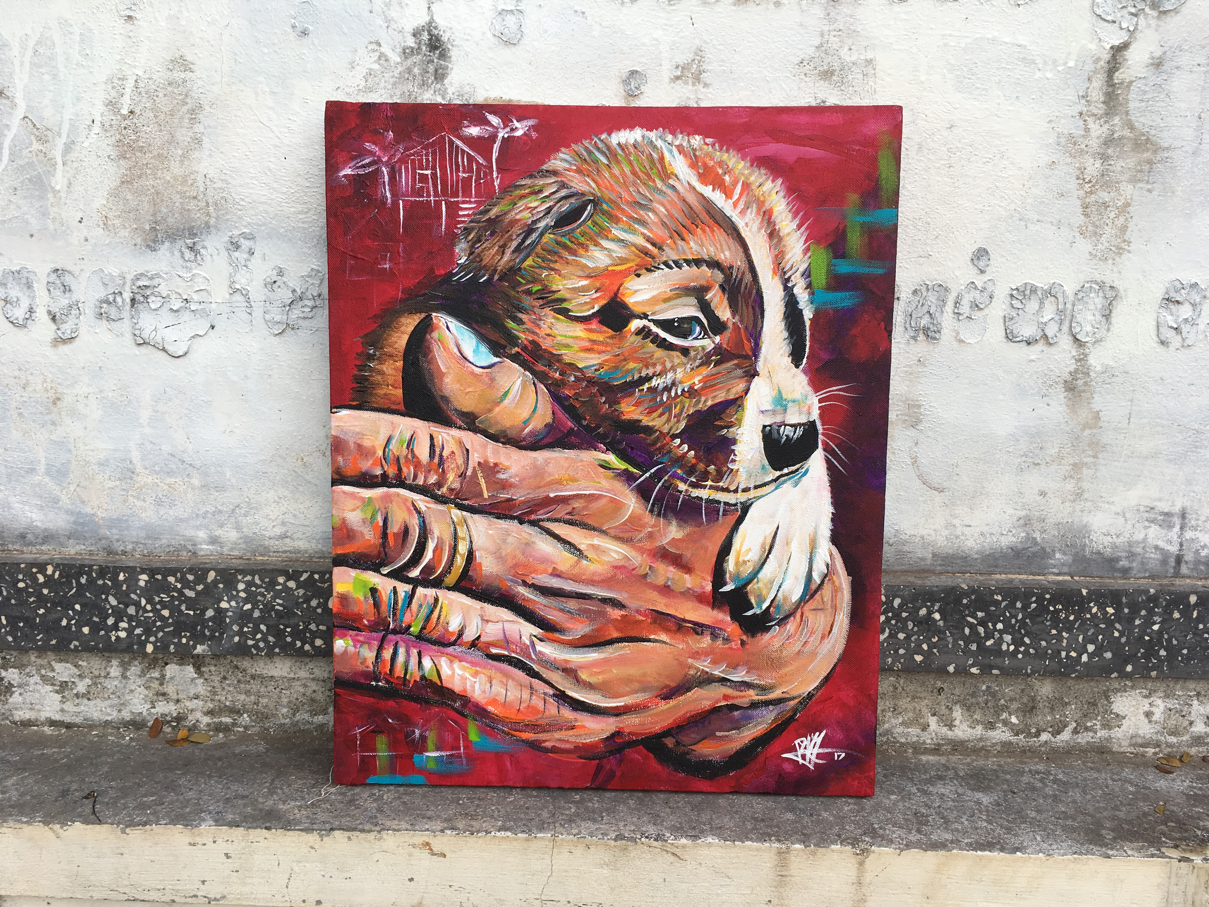 I changed a few things with Mern’s painting, small details that brought it to where I felt it was done.  The addition of a house in the background seemed to be perfect.  My plan is to have everyone sign the back of the canvas if we can find a Sharpie.  That would be a nice touch. Heather had booked us a tour and dinner on Tonle Sap Great Lake to close out the day.  She had an intimate and romantic setting in her head, very different from what it ended up being.  I could tell early on that it wasn’t going to pan out the way she envisioned. 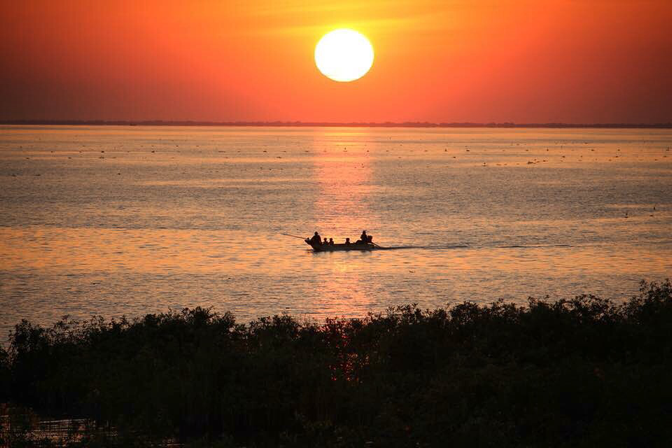 However, we both made the best of it and ended up having a lovely visit with two airline pilots from the UK and two lovely ladies from Singapore.  The sunset was nice, especially when that boat came into the shot at the exact moment.  The trip back was also unforgettable.  The boat captain shut off all the lights to help keep the bugs down. The result was an unparalleled view of the night sky and a million stars.  I had not had a view of the heaven’s like that in decades.
Email Post