In the small village just outside Siem Reap, Cambodia, you would never know that a major holiday like Christmas was overtaking store fronts, power aisles, and millions of minds and hearts half a world away.  There is no "holiday season" in this part of the world.  In fact, I could count on one hand the number of times we saw Christmas in Thailand and Cambodia. 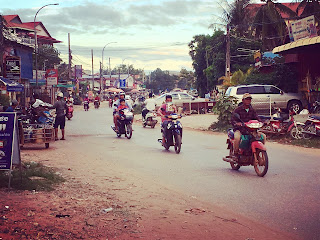 We were out exploring the public transit system in Bangkok one day when we happened to arrive at a mall, purely by accident.  There was no inclination on our part to shop - we had packed very light and had almost no room to bring anything extra home.  However, we were a little hungry, so we sought out an ice cream store to satisfy our tummies and take a load off.  All of a sudden, we were surrounded by the world's most prominent luxury brands and the first signs of Christmas on the trip thus far.

Thailand and Cambodia are largely Buddhist countries, which is why Christmas does not have a foothold.  There are small christian populations, but it is the many tourists that come from Europe and North America who influence the stores and public places to pay homage to the season. 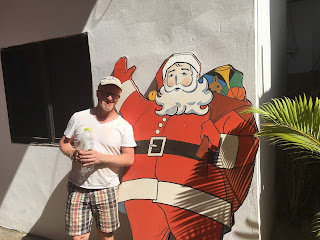 There were several places in the bustling tourist mecca of Siem Reap, gateway to Angkor Wat, where Christmas subtly appears.  Rick has a cutout of Santa just outside Genevieve's Fair Trade Market.  There was also garland strung up in the airport and a giant Christmas tree made of items made locally from wicker.  That was pretty much it. 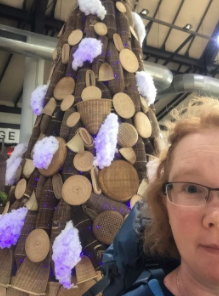 If I'm being honest, I didn't miss the commercial push of the Christmas season.  Its absence didn't matter.  The kindness, caring, love and hope which is the true foundation of Christmas was everywhere, as were smiles and signs of joy. 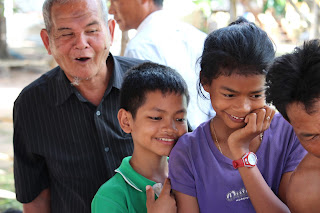 We've been home for four days.  Something felt missing as we caught up with our regular lives and I got back into the studio.  Five surprise Christmas presents have been created so far, with a handful more to come in the days ahead.  However, the spirit of Christmas, the sense of magic seemed missing in the house.  So, while Heather was out teaching yoga and Dylan was at rehearsal last night, Ben and I worked together to put up the Christmas tree and some decorations.

We have had no time to do Christmas cards or focus on gifts.  The three weeks in Asia required our complete focus.  But putting up the tree seemed to bridge the gap we were feeling between what was happening all around us here in our community and in our hearts.  The tree, its decorations and presence reminds us of the role of Christmas in our family and in our town.  It is a beautiful tradition that brings us all together - if not physically, then emotionally - around the magic and wonder that is Christmas, and the human caring that goes along with it. 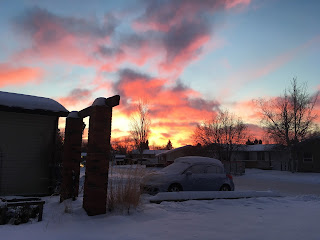