I have to figure out what day it is; it no longer pops into my brain naturally.  I’m savouring a quiet few moments on our balcony as Heather sleeps in and the city of Siem Reap begins to stir. 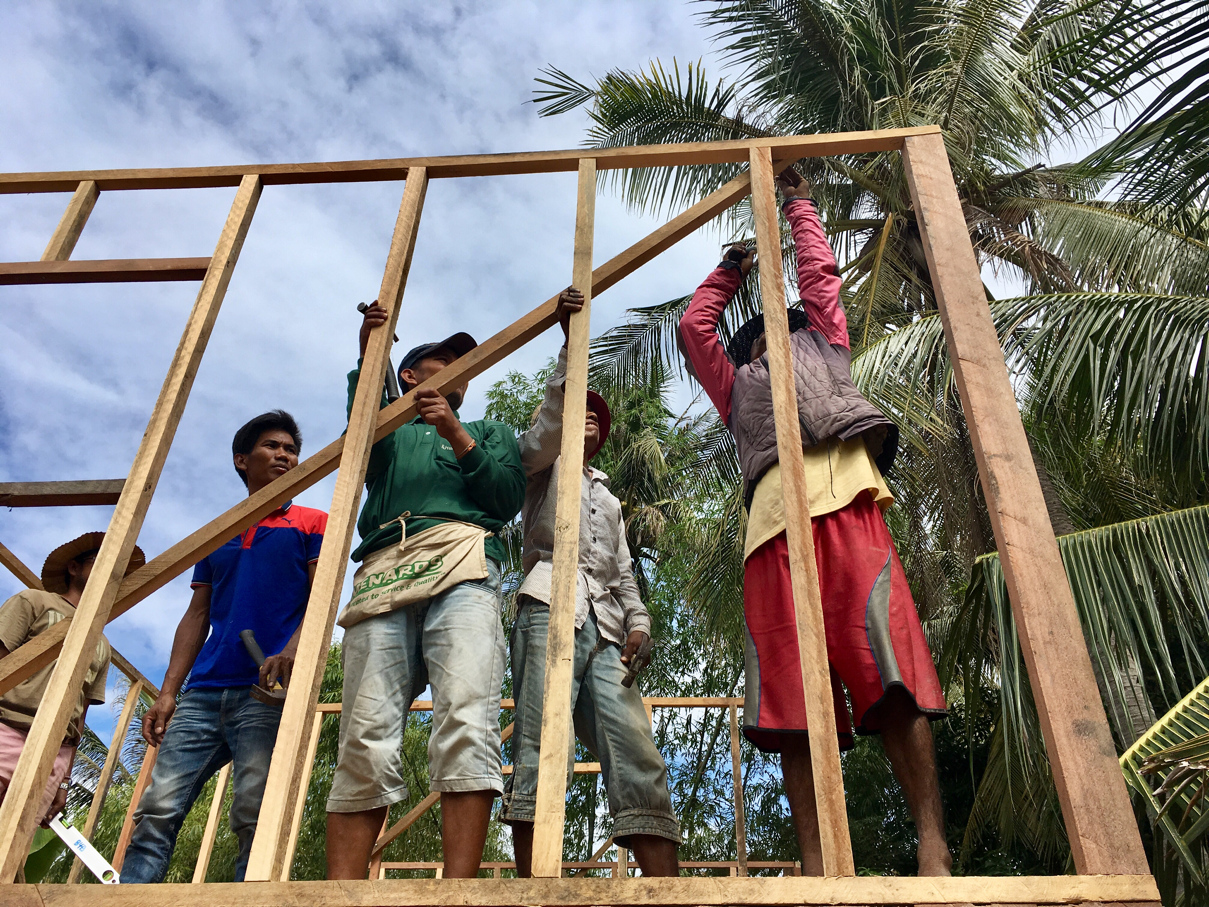 Yesterday, was a full day of construction for me.  Heather chose to stay behind in town and go with Cara to put the home welcoming package together for Mern, an equally important task.  We went out to site shortly after 8 am and returned at 6 pm.  It was a full day of cutting, drilling, chopping, unloading, and doing whatever small task that needed to be done. One person who really captured my attention yesterday was the young fellow who will be a recipient of one of the two houses that are being built side by side.  He spent hours chopping out a tree trunk that was situated where the concrete pad needed to go.  He then made countless trips back and forth across the site, moving dirt to get things ready for the concrete pour that will happen in the next two days. The sweat equity he has put into his better future is inspiring. 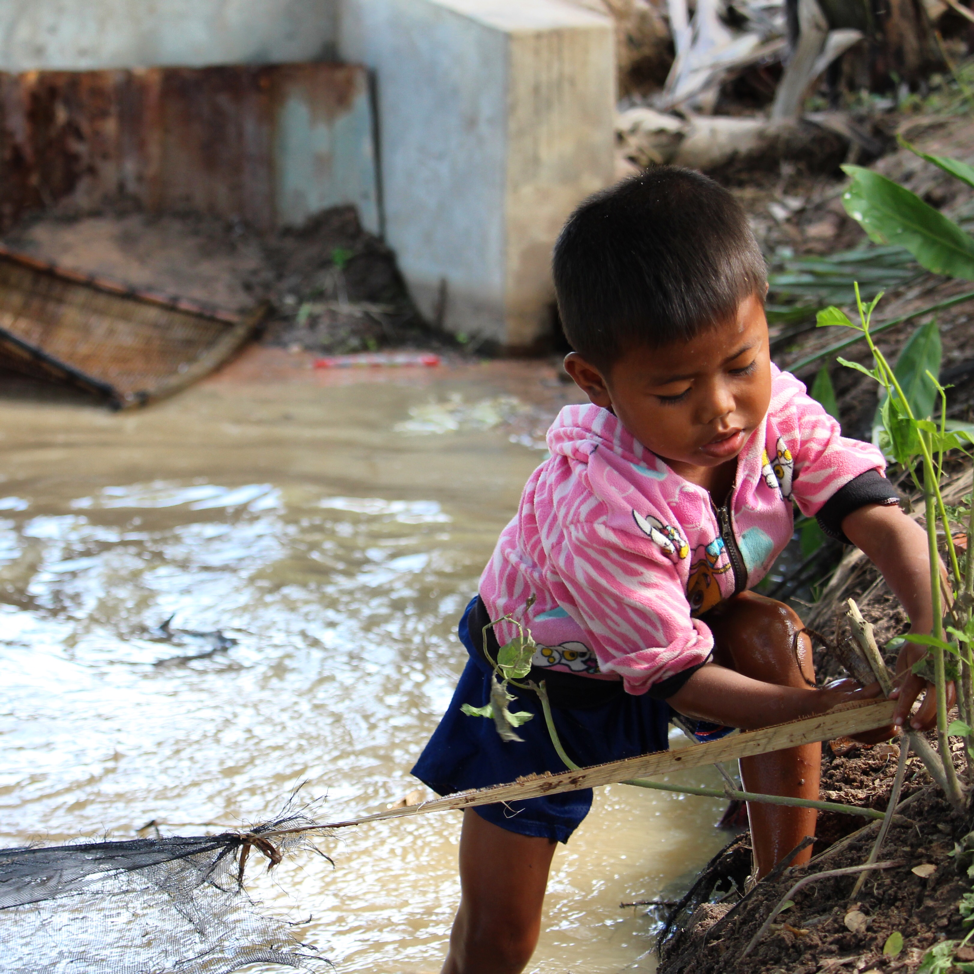 Another example of determination that caught my eye was that of a young 4 year old boy.  Over the last few days, local villagers have been trying to drain a swampy area near Mern’s house and redirect the water to a different spot.  This water all came in during the rainy season and still contain lots of small fish.  The pump has been breaking down quite a bit, but yesterday it was moving the water at quite a pace.  This small boy knew that the water coming through the large hose would include fish.  I watched as he tried a number of different methods of taking advantage of this movement of water.  First, he tried a wicker basket.  Then he went out and found a piece of battered fish netting.  Even though it was too short to fit across the stream he used found objects and tools to get it secured on either side of the stream. He never gave up. He never looked frustrated.  He looked totally focused on his objective at the ripe old age of four.  Amazing.
The children are all so engaging, as you have probably seen in some of the photos we are posting.  Here are a few examples from yesterday. The adults are equally welcoming.  I was walking down the red dirt road when these two ladies called me over. 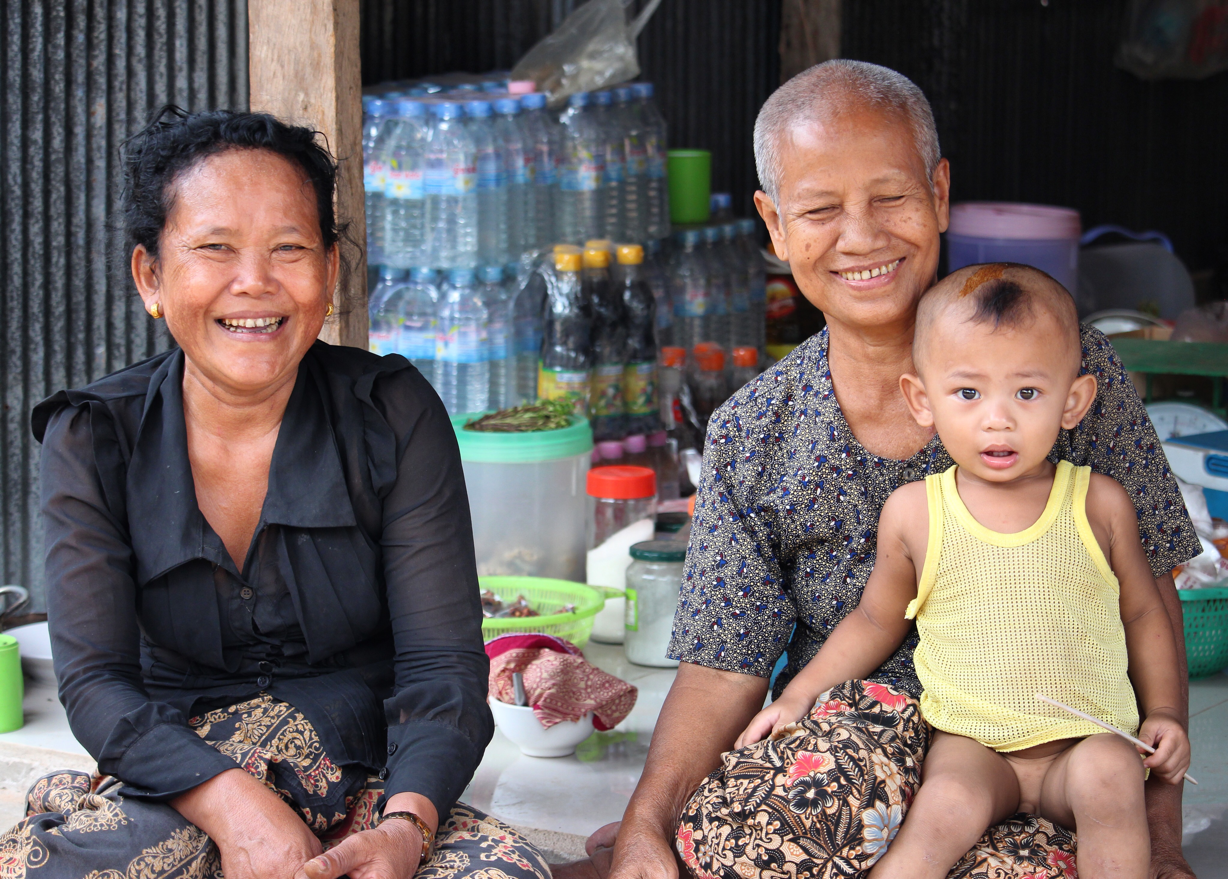 They are about halfway between Mern’s house and where the two houses are going up next to one another.  They offer a few small things for sale to help those villagers who have no means of transportation. After come opening attempts at communication, mixed with lots of laughter, they offered me a chair and some shade - the sun was beating down at that point of the day.  We had a lovely visit and lots of laughs, as we tried to understand each other.
“Susaday (pronounced seus i die)” is how I greet people now. Kent had kindly pointed out that “acoon” is only used for “thank you”.  That informal hello instantly breaks the ice in every interaction. 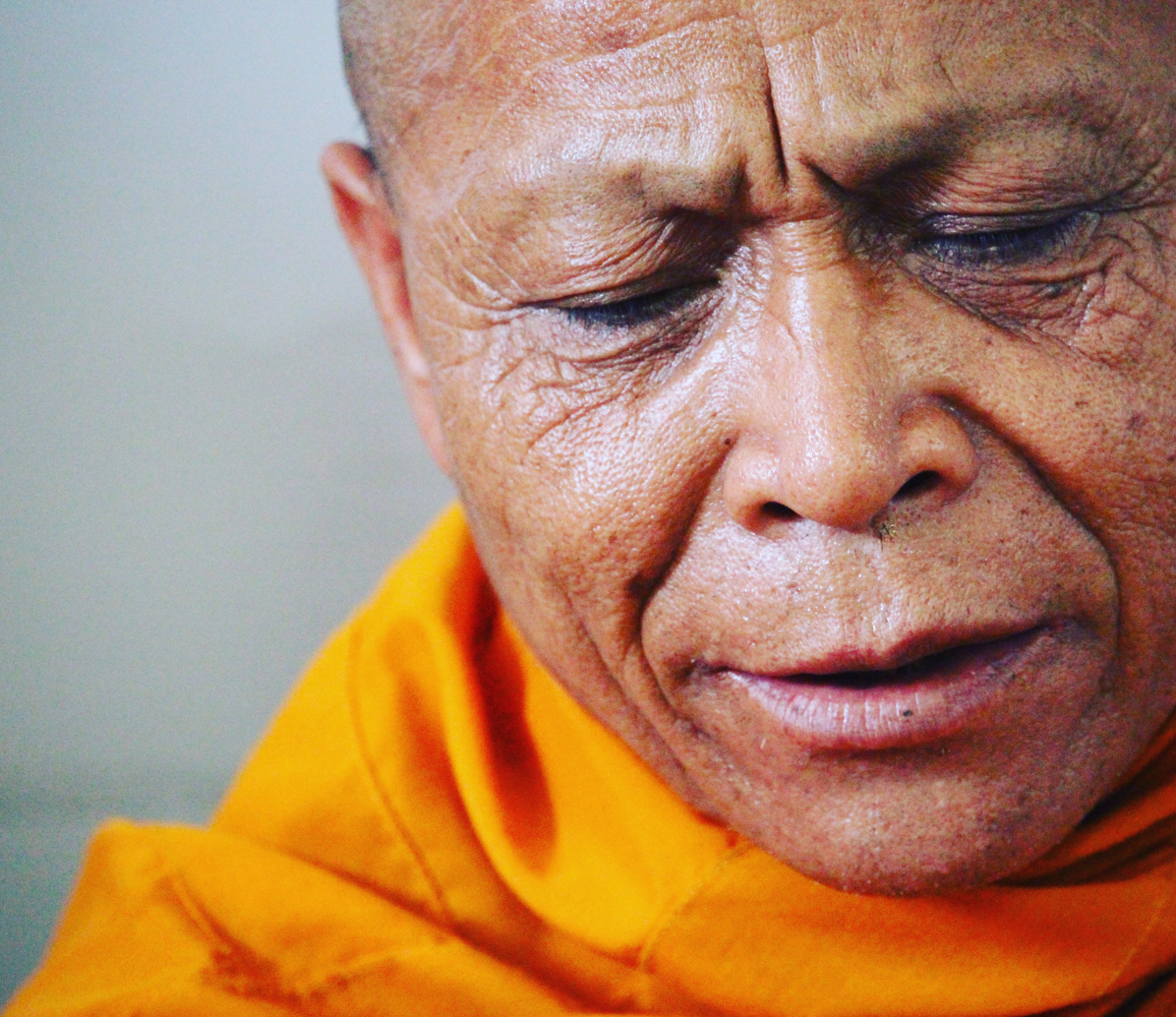 I was walking through the temple grounds when I saw Monk number 3 coming down the stairs from on of the buildings.
“Susaday,” I said, coupled with the Namaste greeting. He immediately returned the greeting with a smile.
I pulled out my phone to show him the portrait I had taken a few days earlier.  He mimed his recognition that it had been taken at the house blessing ceremony.  He gave me another big smile and we went our separate ways. At the stroke of 5 pm, activity on the work site came to a halt.  It had been a successful day of framing out both structures, and preparing the two sets of steps that will lead into the heat houses.
We stopped at Poy Thou’s house on the way back to town. The prefab home was completely done, with the concrete cylinders (for the waste system) and bathroom structure place in the yard. We moved those into place as a load of fill was coming in this morning.  It is important to try to get the level of the concrete pad above the flood plane.
What a change from just a few days earlier when Lee found Poy Thou in the market to share with her the good news. I forgot to mention that she had placed money at all four corners of the house - a sign of good luck in Buddhist culture.  The energy had changed in this space and with the family. We gave his mom, Poy Thou, a group hug as we stood together looking at the finished product.  It was a good day in Cambodia; I was honoured to be a part of it.
Email Post