It is our final morning in Siem Reap.  In a matter of hours we will organize our stuff, pack our backpacks, and head to the airport.  While I am ready to be home, I will be sad to leave.  The faces of the people roll through my mind and heart: Mern, Poy Thou, Chat Tom, Chat Chong, Siriann, Socheeit, Wanchee, Maleya and so many others. 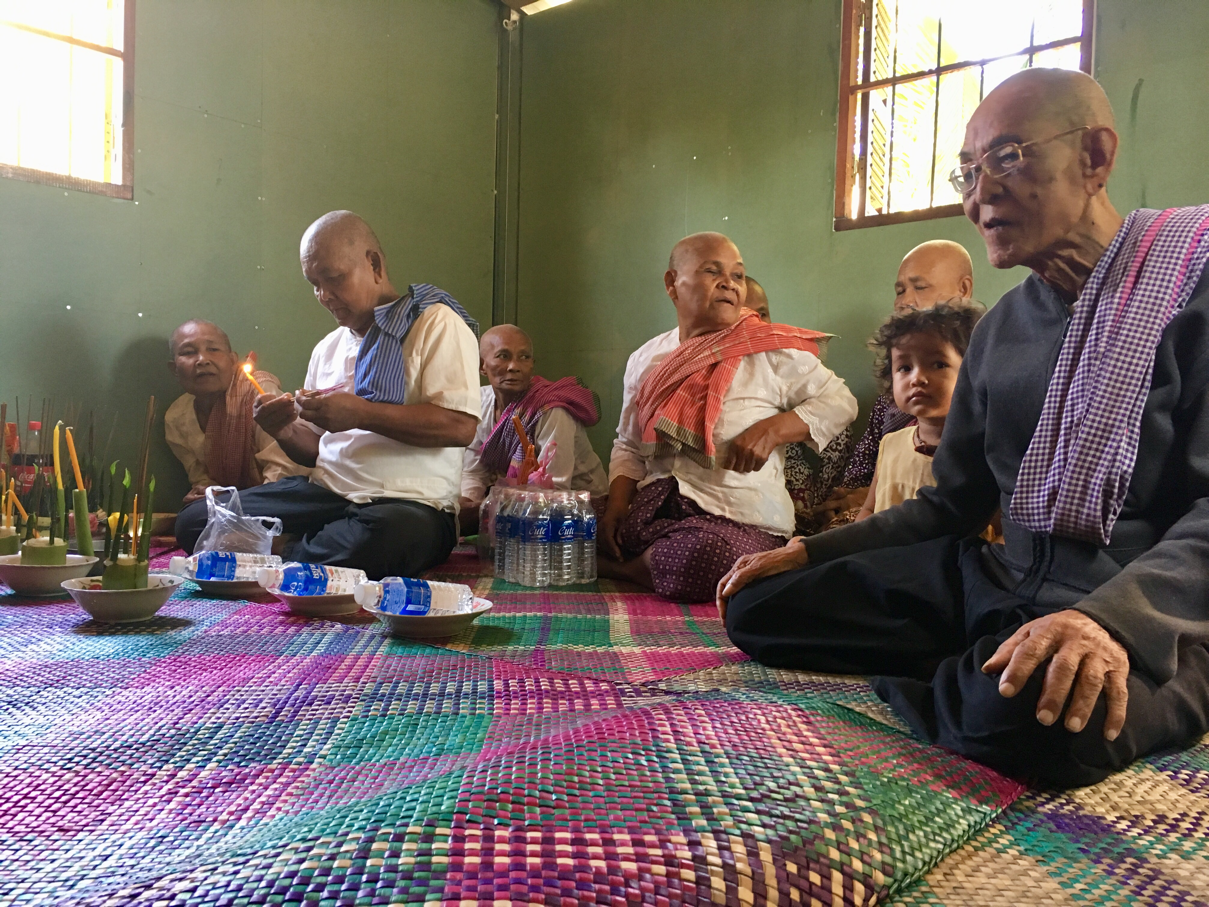 In the Buddhist tradition there are several things that are very important to ensure good luck and prosperity.  In the construction phase, money (a very small amount) is buried at all four corners of the house. When construction is complete the monks and the community are invited to a blessing ceremony. Based on what I observed, shortly after the monks arrive and sit along the south wall, the canter begins the ceremony.  He and the community members, including the recipients, chant together in what appears to be a back and forth dance with the monks. Offerings are given to the three monks and then a long and beautiful sutra begins.  The senior monk dips a banana leaf in water and blesses the people and the house.  Getting a drop or two in your face is very expected, and fun, during this phase. The cooling drops are cherished as it gets pretty warm in those small houses when they are full of people.
When they are done they smile, say their goodbyes, and descend down the stairs.  A contract is then presented by Lee and Kent to the recipients through Heng, the amazing translator.  The agreement contains a number of obligations and formalizes that if everything goes well over the next 5 years, the home becomes permanently theirs. The contract is thumb signed, in the many cases where the recipients don’t know how to write, by all the different parties including the village and commune chiefs.  The recipients are required to keep the property clean and live a health lifestyle. The sponsor, or Lee and Kent with Bracelets4Buildings presents the key and lock; then the feast begins. In each of the blessing ceremonies that happened yesterday, there were slight variations.  One of the most beautiful things to watch at each one was the recipients deep in prayer.  Even Chat Chong, who always seemed to be a snarky bugger, was chanting along and getting swept up in the moment. Mern started sharing her abundance as soon as her ceremony was over.  She was dishing out rice and money to neighbours.  This was a lady who had practically nothing, but her heart was full and she wanted to share.  It was hard not to get emotional seeing her generosity of spirit. 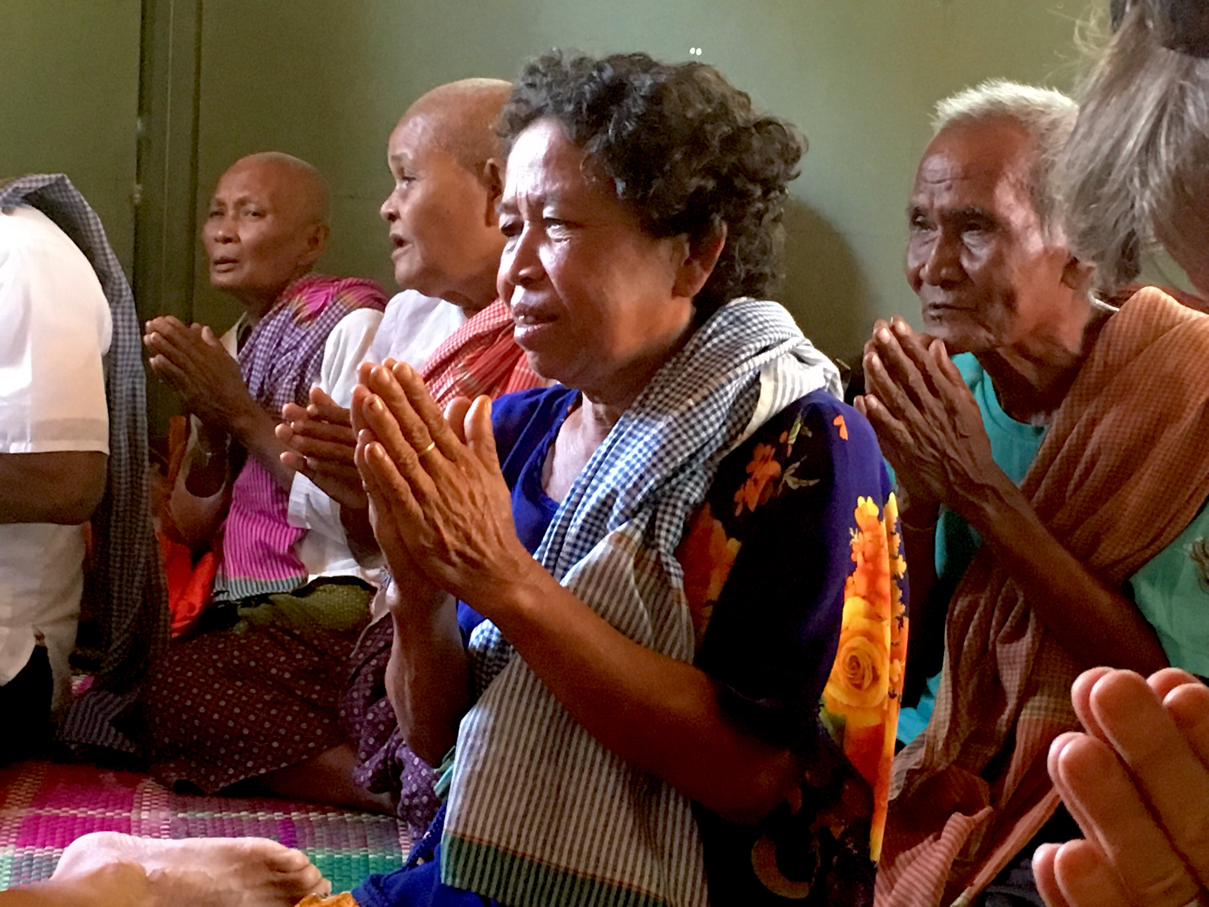 There were a number of emotional high points for me.  When Mern opened up her present and saw the painting, her reaction was beautiful.  Heather and I both got many hugs and I even got a few kisses.  I hope Alistair was able to catch her reaction.  It was very special. At one point Heather started doing yoga with Maleya and Sariann; even Wanchee joined in. That was so nice to see as they grabbed onto it immediately.  One of Heather’s challenges of being out there was finding stuff to do.  This might be something that could go over next year, based on how quickly the kids jumped in. I wasn’t  going to sit through the second blessing ceremony for the two stick built homes, but I couldn’t help myself.  I felt like I needed to bear witness to the blessing of Chat Tom’s house, as I connected with him and his kids in a deep and profound way, similar to how we both connected to Mern.  I glanced over to Chat Tom and his wife Ann and saw them chanting with such a beautiful intentionality.  Sariann and Wanchee were doing the same.  I think Socheeit was a little young to appreciate the significance and was outside playing. 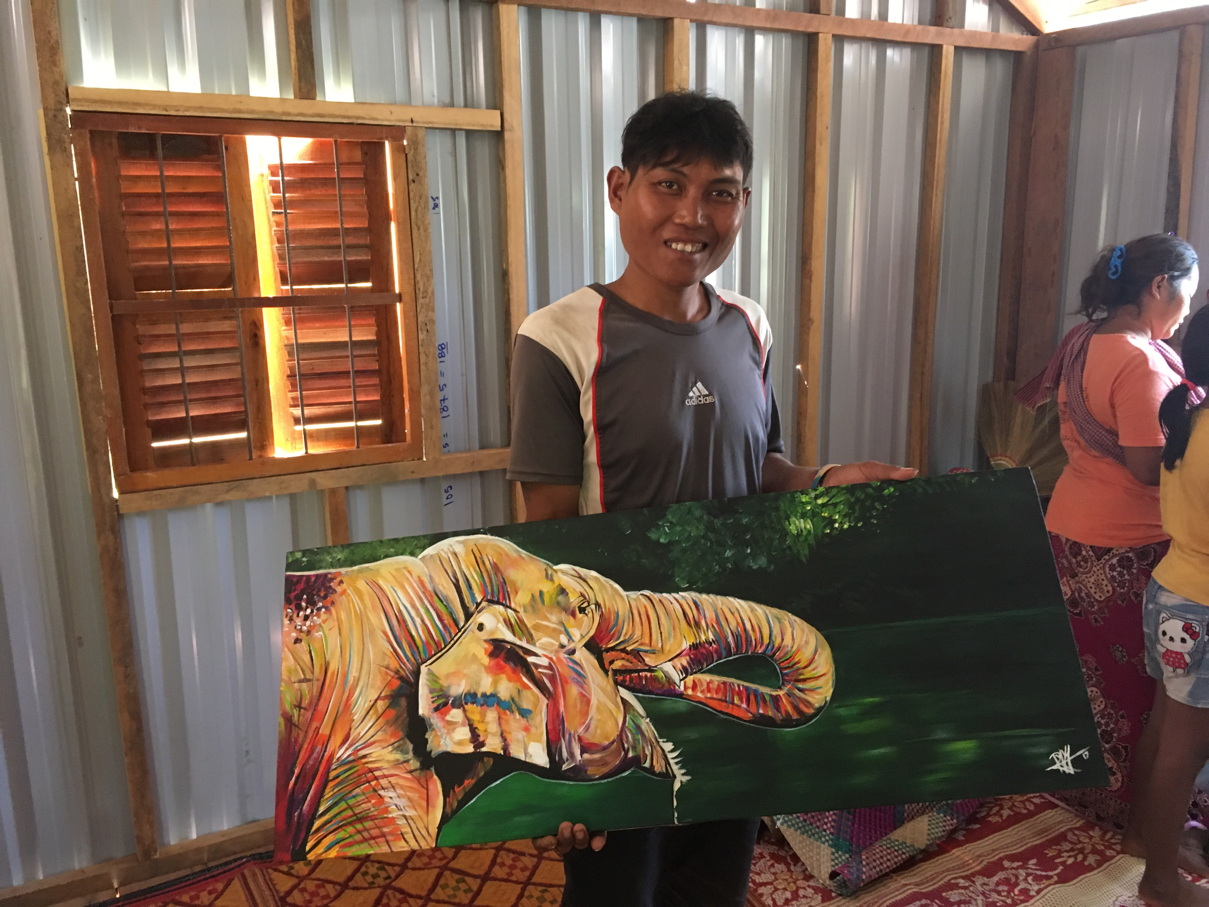 When the ceremony was over (it took place in the home of Chat Chong), Chat Tom and his family entered their house for the first time. I presented the painting, wrapped in a beautiful green sarong, saying that this was a special gift from Heather and I to them.
I get emotional just thinking about it.  The painting of the elephant was a co-creation with their children and it will hang in their beautiful new home.  Chat Tom chose the spot to hang it.  When asked by Heng, the translator why he chose that spot, he said he wanted it to be the first thing people see when they come into the house. Our final stop on the blessings tour was Poy Thou’s house.  Remember that last week she was living in a shelter with three walls and absolutely no security.  She had her hair done and was wearing a beautiful outfit.  There is no hesitation in saying she was radiant, grateful, hopeful and emotional all rolled into one.  At one point in the ceremony she glanced over to Alistair to see the photos he was taking.  I playfully suggested that she was eyeing him up as a potential catch. When the blessing was over, all of us drenched in sweat, I asked Heng to tell Poy Thou that I created something the day before as a special gift for her and her family.  She unwrapped the painting of Buddha and saw what might be the very first piece of art that she has ever owned.  Poy Thou kept her emotions in check.  I can’t imagine how much she was processing at the time, but I could tell she was grateful. I saw Chat Tom just as we were leaving.
“Lee Hi,” I said, or “Goodbye” in Khmer.  “We fly to Canada tomorrow.”
“Aeroplane,” he said with a huge smile, extending his arms.
“Yes,” I said, extending my hand as he extended his and we shook hands.
In Chat Tom and his family I see a hopeful future. I can’t wait to see them again when we return.
Email Post