Coming to terms with my own needs and limitations

I spent my time in the studio today working on a portrait of the former King of Thailand, for no other reason than I felt like I needed to.  A busy week of commissions lies ahead, after an afternoon workshop tomorrow.  Even though I have more than earned my personal time, I have to remind myself (constantly) that it's an important part of my creative process.

I could be doing commissions every single day, and earning money at the same time.  However, an equally important part of this new life as a full-time artist is taking time for professional development.  The portrait of the King of Thailand is an example of a project that is part of my education. 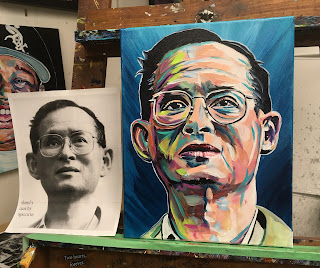 I spent a couple of hours with it last night, bringing it to the state that is shown above.  It was a good start, but it still didn't feel right. 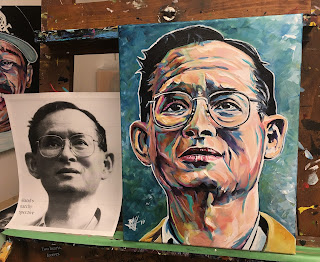 This morning I played with it some more, and even got it to the point where I was comfortable signing it.  However, the more I look at it, the more I want to work on it some more.

My constant struggle with portraits is bringing in the right skin tones, balanced off against the colourful flourishes.  There is a sweet spot that is not too light nor too dark that helps the character jump off the canvas.  I'm still trying to be better at this particular element of my work.

Why the former King of Thailand?

Everyone who spoke of him when we were in that country, spoke of him with adoration and affection.  He was a great King.  There was less enthusiasm for the current monarch, the son.  In fact, the general sentiment is that they wish the daughter could have become King instead.

Heather and I went to an exhibition of the late King's photographs.  They were so revealing about the leader and the man.  I knew right away that he would become a painting subject.  He's also become part of my ongoing education as an artist.
Email Post