It is 23- degrees at 6:45 am.  I am sitting on our third floor balcony with a cup of coffee - instant coffee is prevelant here as it was in Thailand. Off in the distance I hear layers of sounds: traditional music, birds, light traffic and people starting to move about. It was our second night here at the Angkor Villas hotel, a happy return to a western style mattress and bedding. In Bangkok, our mattress and pillows were as close to solid as I have experienced. In some ways, this room in Siem Reap feels almost decadent. 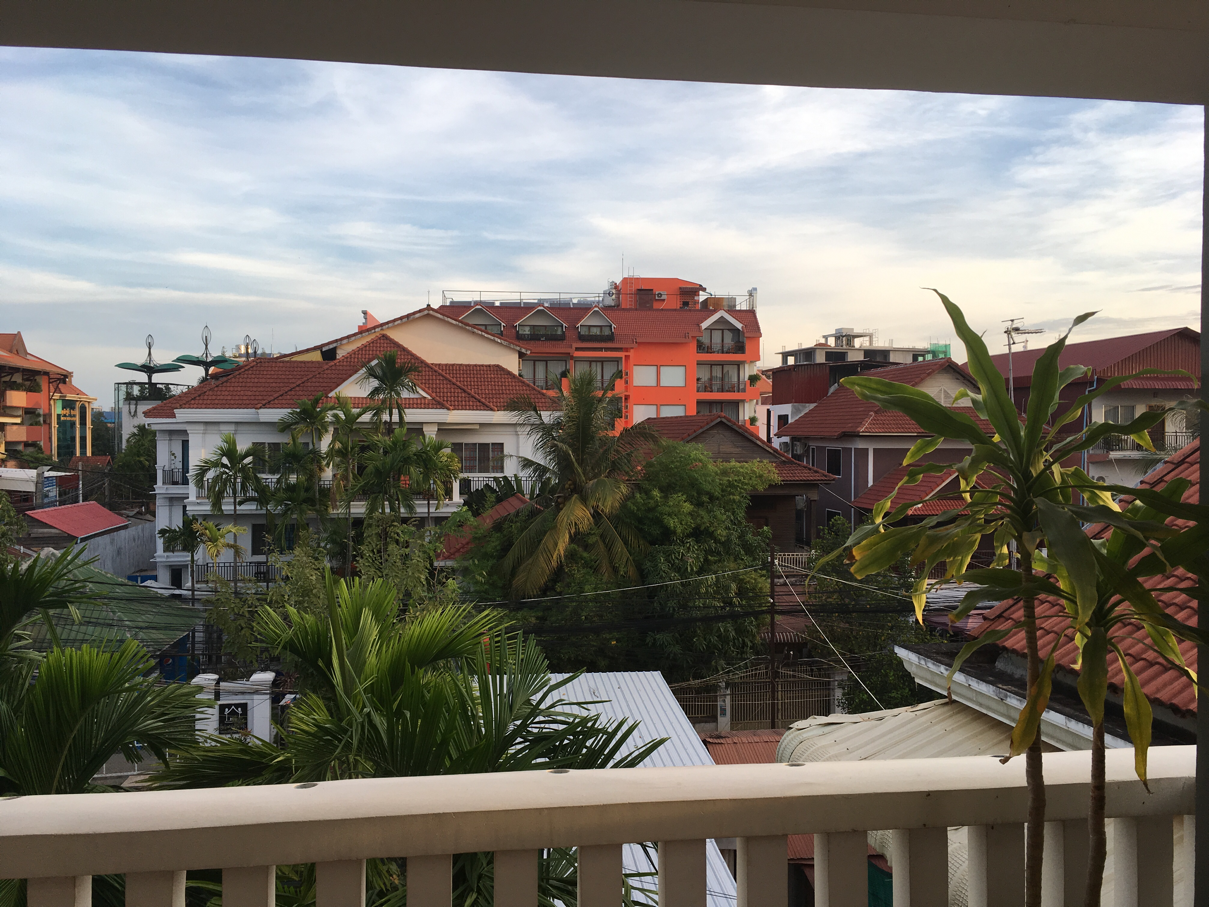 We went out with Kent and Nick to the house building site early yesterday morning. Kent is one of the Co-founders of Bracelets For Buildings; Nick is a sponsor of one of the homes, like us.  The team rents a van and a driver for the length of the project.  Having access to dependable transportation is essential as the build location is a 35-minute drive away down bumpy and dusty roads.  Lee, the other founder, chooses to take a tuk tuk and arrives before everyone else. 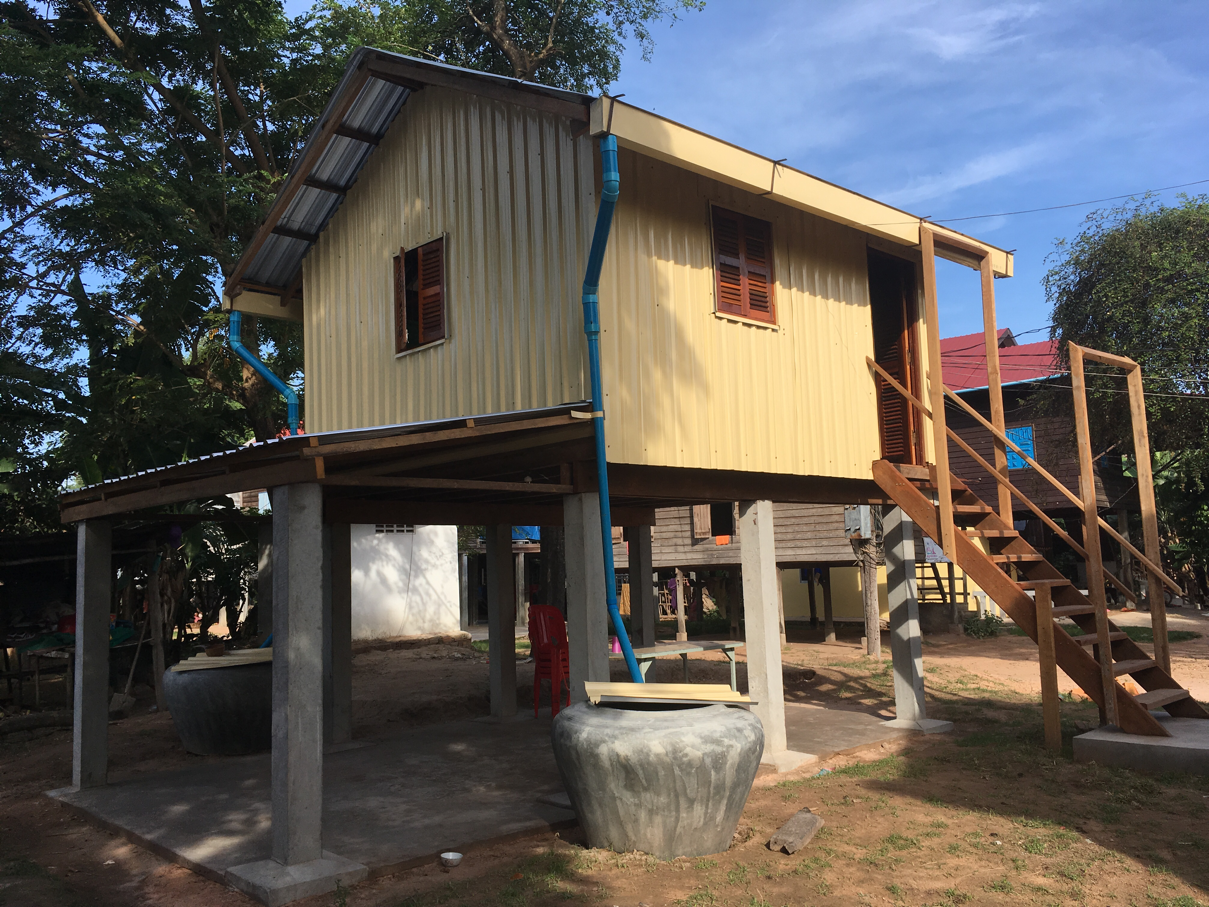 The local crew and Lee were hard at work preparing the concrete pad and putting finishing touches on the stairs and its added feature of an overhang to protect against the rain. Lee and a member of the local crew were using a router to round off the edges of the vertical supports for the overhang. In Canada use spruce dimensional lumber, a plentiful softwood, perfect for construction.  In Cambodia they use mahogany, a plentiful hardwood.  It is incredibly dense, hard and heavy.  Every screw or nail hole has to be pre-drilled.  One 8-foot piece of dimensional lumber weighs 3 or 4 times as much as similar piece back home. Lee is a hands on construction guy. He loves being out there lending his skills. Kent appears to revel in the planning and spent much of the morning working on his laptop. Working side by side with the local who I shall call Prah, we communicate through the language of construction. Do the pieces of wood line up flush? Are the vertical pieces square.  No words are necessary, just smiles and nods.
Everyone broke for lunch and a rest around 11 am. Kent had stopped by a local bakery, just a few doors down taking from our hotel, to pick up some loaves of freshly baked bread along with some cheese, lettuce, meat, and tomatoes. It was our first western-style meal on our whole the trip. 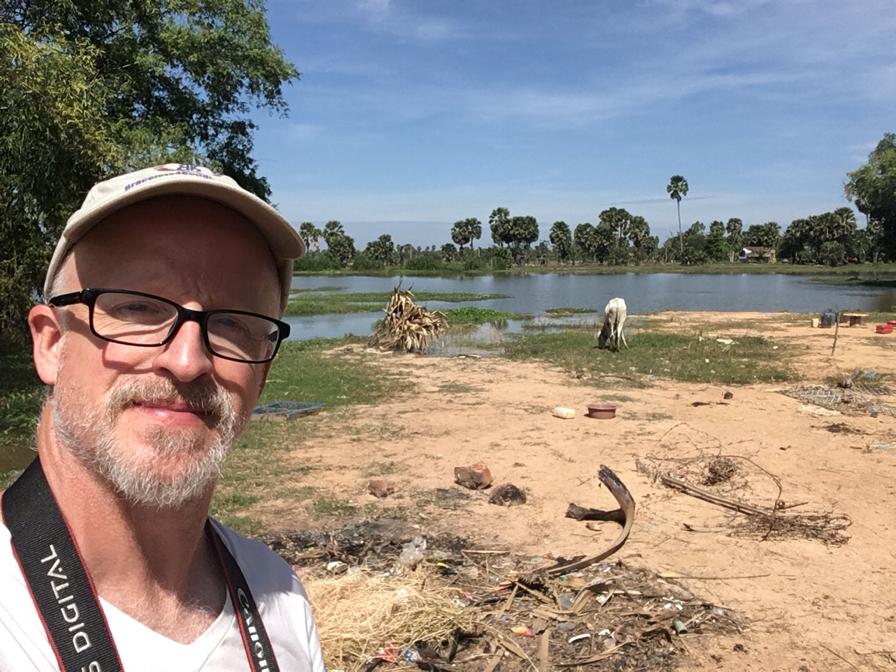 We took a stroll through the neighbourhood to check out two other sites where houses would be going up. When I say “neighbourhood”, it truly is. Tiny farms are grouped close together, children bicycle to and from school, mothers do work around their homes and yards, and men do a variety of other tasks. They all respond positively to the greeting of “A-khun” followed by Namaste gesture. The kids absolutely light up as we go by. 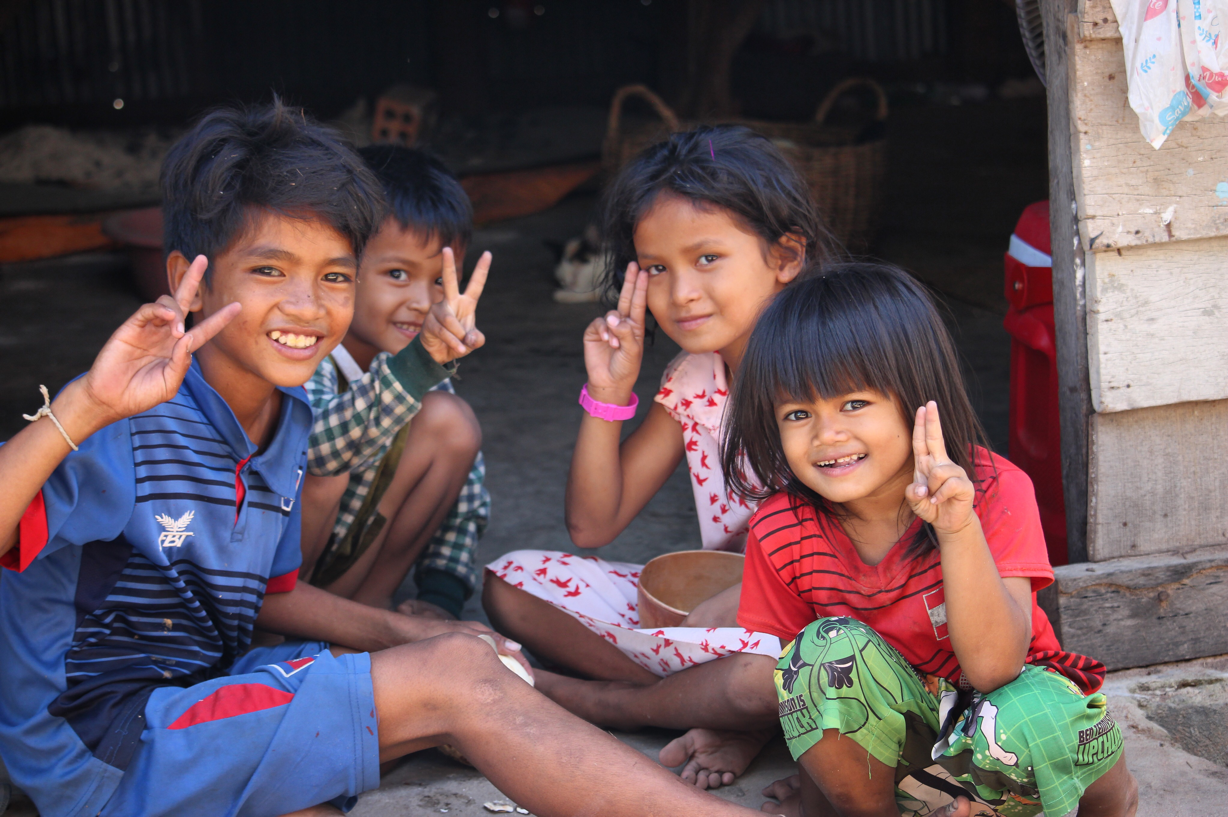 Our fist stop was Mern’s house.  It is a ramshackle shelter that looks to be at the end of its life. She was tending a fire when we arrived, boiling minnows and rice.  I couldn’t decide if it was for her, or for her dog and her puppies.  Mern tried to coax them out so we could take pictures, but they were more interested in staying in their enclosure. 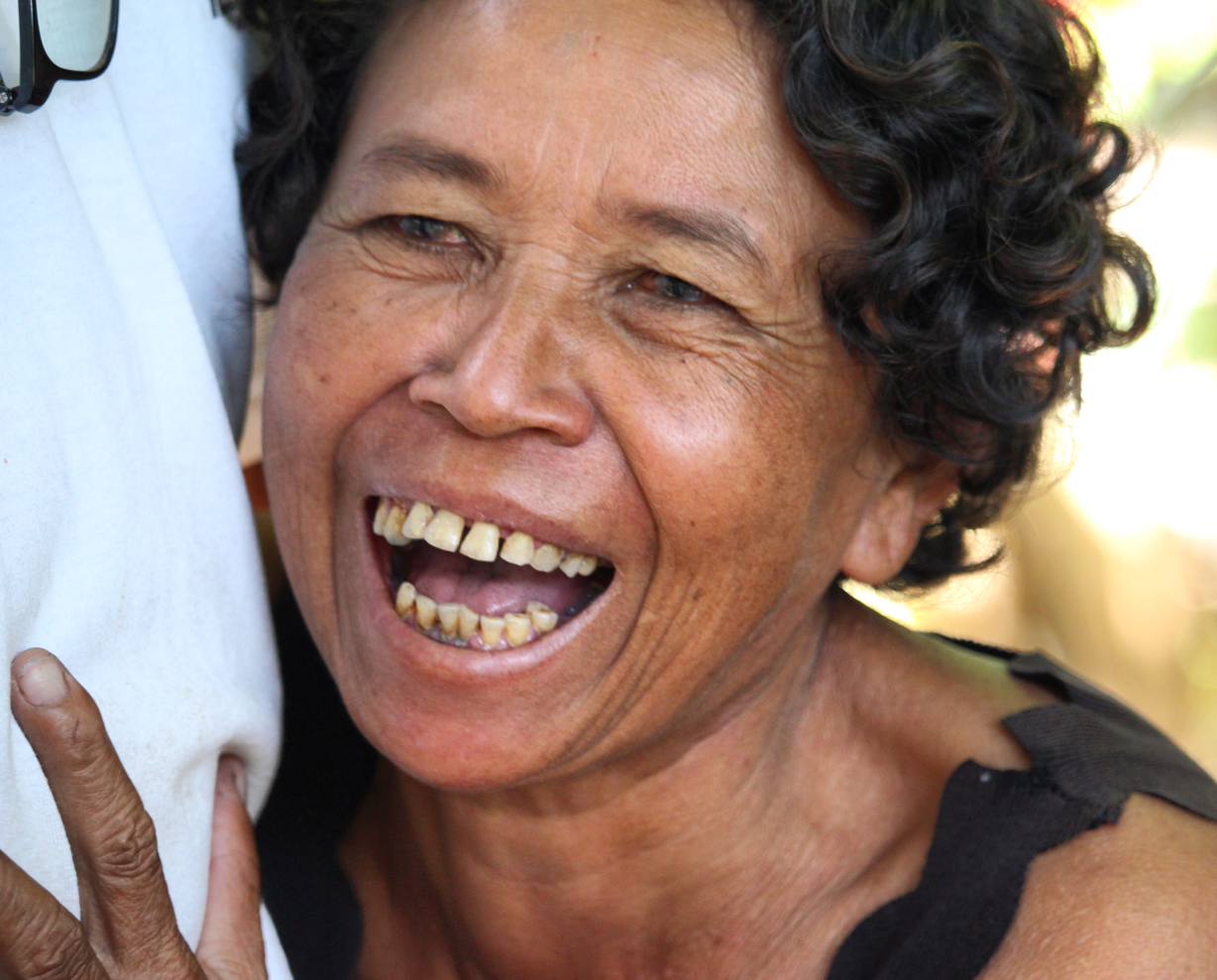 When Mern found out who we were she grabbed Heather and held her close, tears falling across an enormous smile. I offered her a Namaste greeting, not quite sure what would be culturally appropriate.  It didn’t matter in the end, she grabbed me too and squeezed me tight.
“I almost started crying,” said Heather, reflecting on the moment later. I definitely choked up, feeling every ounce of gratitude and love that Mern was feeling, and powerfully expressing. 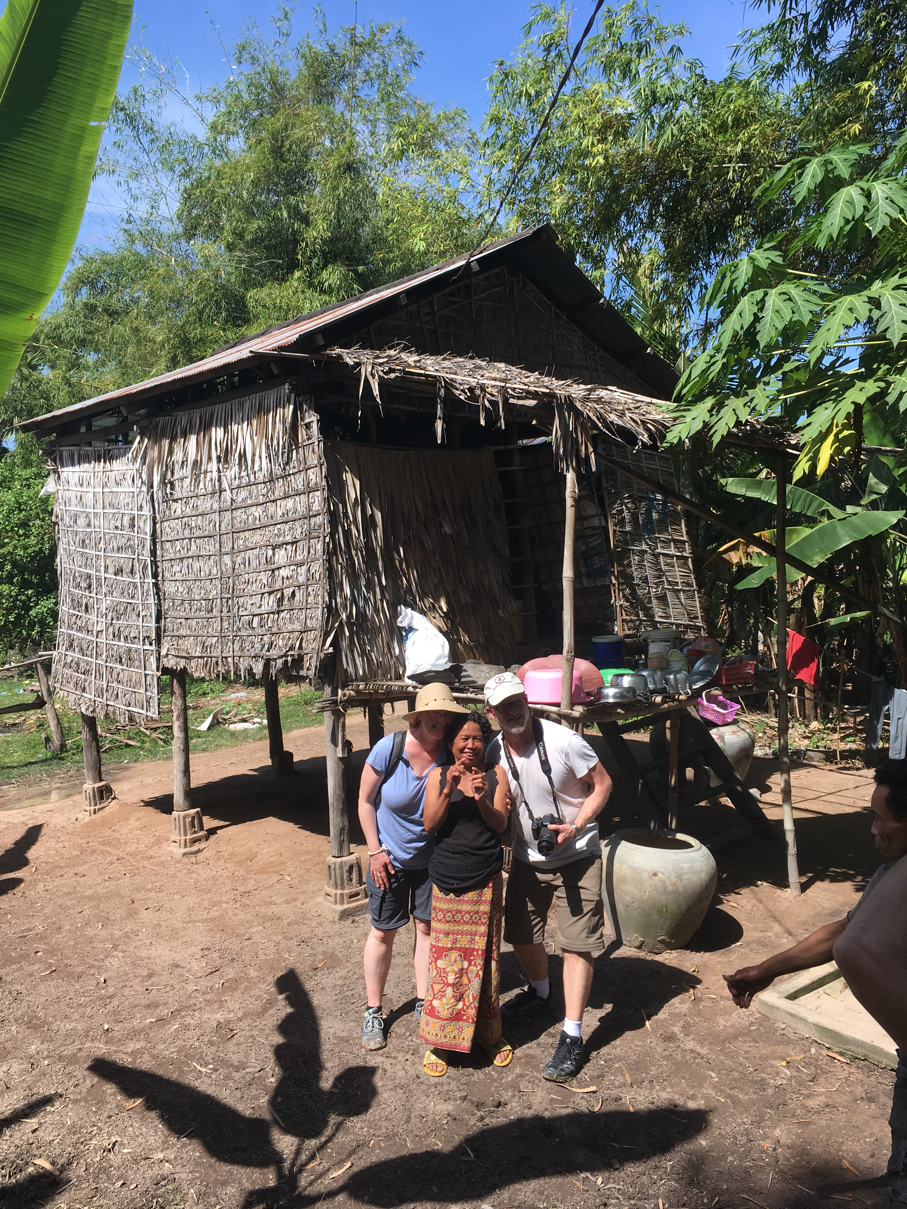 Her shack will come down on Monday and a crew from Phnom Penh will arrive with a pre-fab structure that will go up in a single day. The design and manufacture of these units, inspired by a humanitarian effort of a former Hollywood executive named Scott Neeson through Cambodia Children’s Fund, maximizes available financial resources to do the most good. In this rural community, chickens, ducks, dogs, cats and cattle roam freely.  In the time we were there, baby ducklings were at our feet on several occasions. Giving a little of my sandwich to one caused critters to converge from all directions. It is strangely comforting being out there.  We will return later today to participate in a blessing ceremony for the new home that was completed yesterday.
Email Post