I sit on stage left during the second act of Les Mis, usually on the second step of the ladder going up to the loft in the rehearsal hall.  There aren't a lot of places to sit with so many cast members and set pieces that need to move on and off stage, and I'm at that age where sitting cross-legged in the corner doesn't do my back a lot of good. 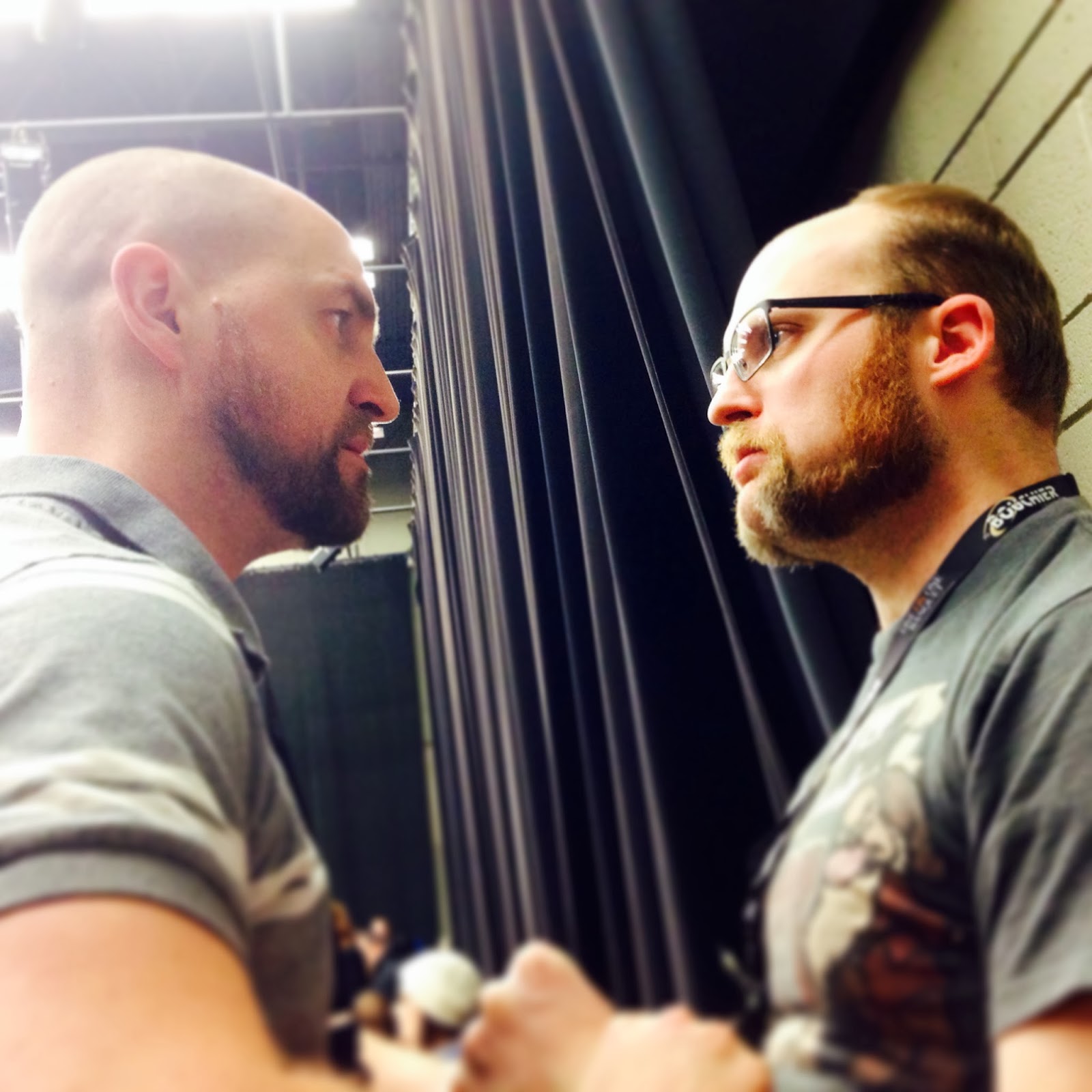 This vantage point is particularly good to see and hear what happens in the barricade scenes.  First of all, the speakers that pump out the tracks are on the other side of the room.  When I'm on the other side, I pretty much have to read lips to sort out what people are singing.

I was getting a little frustrated last night, particularly with the scene where I have to tell my gang to "make for the sewers" to avoid getting pinched by Javert and the authorities.  Something was going on with my throat and I was having a devil of a time hitting my note.  There is nothing worse that singing full voice, knowing beyond a shadow of a doubt that you are off key, and not being able to fix it.  Eventually, I was able to find the pitch, but not before muttering some not-so-nice words to myself in the wings.

"There is a very important rule in theatre," I said to my son Ben, as he was also visibly frustrated about something that had happened with one of his scenes. "It's called instant forgiveness, of both yourself and others."

Like Ben, I can be a little too hard on myself.  After screwing up that note several times, instant forgiveness was eluding me. 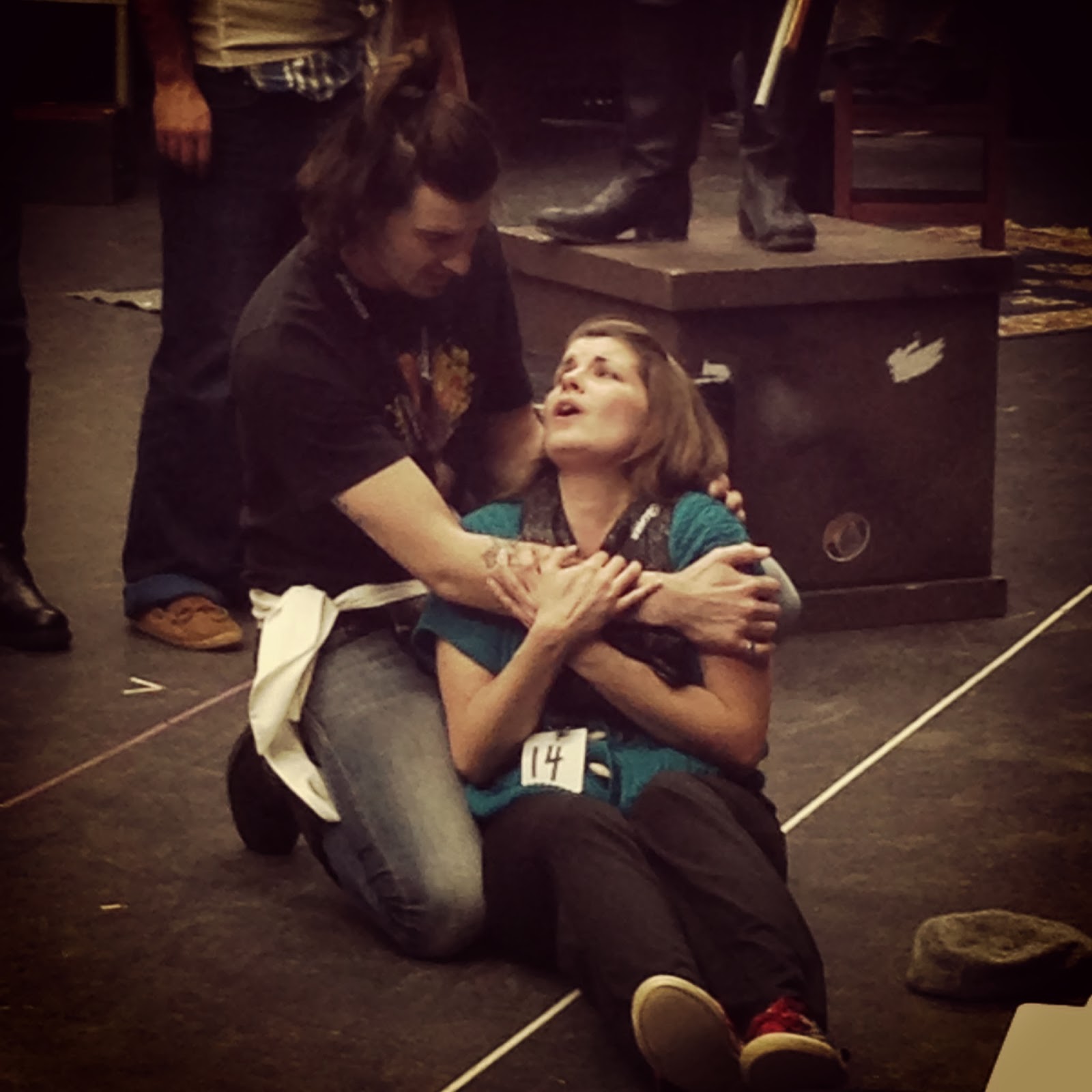 We open three weeks from today. Yesterday was the third time we ran the whole show. We will run it quite a few more times, in the rehearsal, then on the actual stage with the set.  This production schedule is a little more generous than most, in that we get to make the transition to the deck a few days sooner than normal.  Having a few extra rehearsals to maneuver massive set pieces and the enormous revolve in the middle of the stage is a blessing.  This is a complex show with a lot of moving parts and mobility challenges.

Les Mis is also an audio technician's dream, or nightmare, depending on your point of view.  Scott Weber joined us for the first time last night, sitting in the corner of the rehearsal hall with his sound board, computer and wireless microphone chart.  With so many people with solo bits, and a limited number of body mics, there will be a lot of switching going on during the actual show.  The microphone that eventually ends up with me, goes through several different people first.  To simulate these transfers, each of us wore a name tag with a number last night.  This allowed Scott to put faces to names.

Tiffany and Melissa have been furiously working away at costumes in the temporary shop, doing fittings, finding shoes, and building a war chest of costumes that will add that all-important layer of realism to help transport us back to revolutionary France.  It's no small task, trying to fit out almost 50 people, lots of whom have multiple costume changes.  Adding to their burden is the fact that they are in temporary and unfamiliar space owing to the minor flood that occurred over the holiday break, and you can imagine how they might be a little worn out by the end of a long day.

Alan Roberts joined us last night for the second time.  He's doing the lighting design.  His task is to absorb the movement of people and scenery, the director's vision for the intended mood or effect, and integrate it with hundreds of state-of-the-art lighting instruments and special effects gadgets that hang up above the stage and the audience.  Lighting is an important layer that we will engage with for the first time during the cue-to-cue rehearsals, still a few weeks away.

We also saw Valerie Grainger for the first time last night.  She is the make-up goddess of Keyano Theatre and will be integral to punctuating our characters with shadow, lines, highlights and colour.

Several of the talented young people in the show have shared with me that they are diligently following along with this blog series, as are their parents.  I'm so honoured that they are taking the time to read these articles, and sharing them with family and friends.

By the time they get home from rehearsal, I'm sure it's a race to get them to bed and not a lot of information likely gets passed along about what happens between the time you drop them off and the time you pick them up.  I hope this blog series helps fill in the gaps.  That's part of the reason I do this.  The other reason is to share and archive the journey.

What is happening on this road "To the Barricades" is important. It strengthens our community, it builds character and skill, and it provides an experience that we will remember for a lifetime.  While I am looking forward to performing Les Mis in front of an audience, I equally treasure all the miles we are traveling to get there.
Email Post