To the Barricades, Vol. 8

"The show is officially blocked," declared director Claude Giroux, after working through all the complicated barricade bits in Act Two last night.

For non-theatre folks, "blocking" is the movement and placement of actors through a presentation:  where they enter, where they go when they are in view of the audience, and where they exit.  In smaller productions, this is usually a long, exploratory process.  When you're doing something of the scope and scale of Les Mis, it requires a bit more intensity and some quick decision making.

"We open in exactly one month," said Claude at end the night.  With over 20 rehearsals left, we are in great shape and ready to run the show a couple of times this week in the rehearsal hall, including once on Thursday for lighting designer Alan Roberts, who needs to see how things move and where people and set pieces will need to be lit.  He has assured us it will be "exquisite" - as it always is when he lights a show.

Most people are completely off book at this point, lyrics and blocking set to memory, librettos stashed away at home or tucked away in their special spots in the room.  In my experience, this is way early in comparison to other productions, and bodes extremely well for the show that people will see in February.

I discovered that as Monsieur Thenardier, I get quite a break in Act Two.  We descend into the sewers as revolution dawns and don't emerge until the guns are put away and Marius and Cosette get married.  This gives me a great opportunity to watch the action and the wonderful people who are putting their heart and soul into giving honour to this story.

It's a strange morning in Fort McMurray, as temperatures rose overnight to an extraordinary plus five with winds gusts of up to 90 km/hr.  Perhaps because of this meteorological anomaly, I didn't wake up with a song in my head from the show.  On most other mornings, some melody or solo from Les Mis is at the tip of my lips.  Seldom my own, songs of Javert, Eponine, Marius and Valjean have been companions in my early mornings.  I'm sure others are experiencing something similar as we get immersed in this world and in the music. 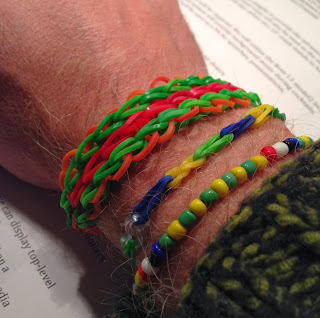 Some of the young members of the cast have been spending their waiting time making cool little bracelets out of tiny elastics.  I wandered by and casually pushing up my cuff to reveal one that I picked up in Ontario this summer.

By the end of the night I had two more, one from Reese (Gavroche) and one from Amrita (Young Cosette).  I was touched.   I am consistently impressed with the level of energy, generosity and fun they, and all the young performers, are bringing to this process.

From an engineer to a pipeline operator, from a teacher to an HR professional, the cast of Les Mis represents an amazing confluence of talent, experience and energy.  It's a pleasure watching it come together every night and we look forward to unveiling it to a full house on our February 14th opening night.  We hope you will join us.
Email Post