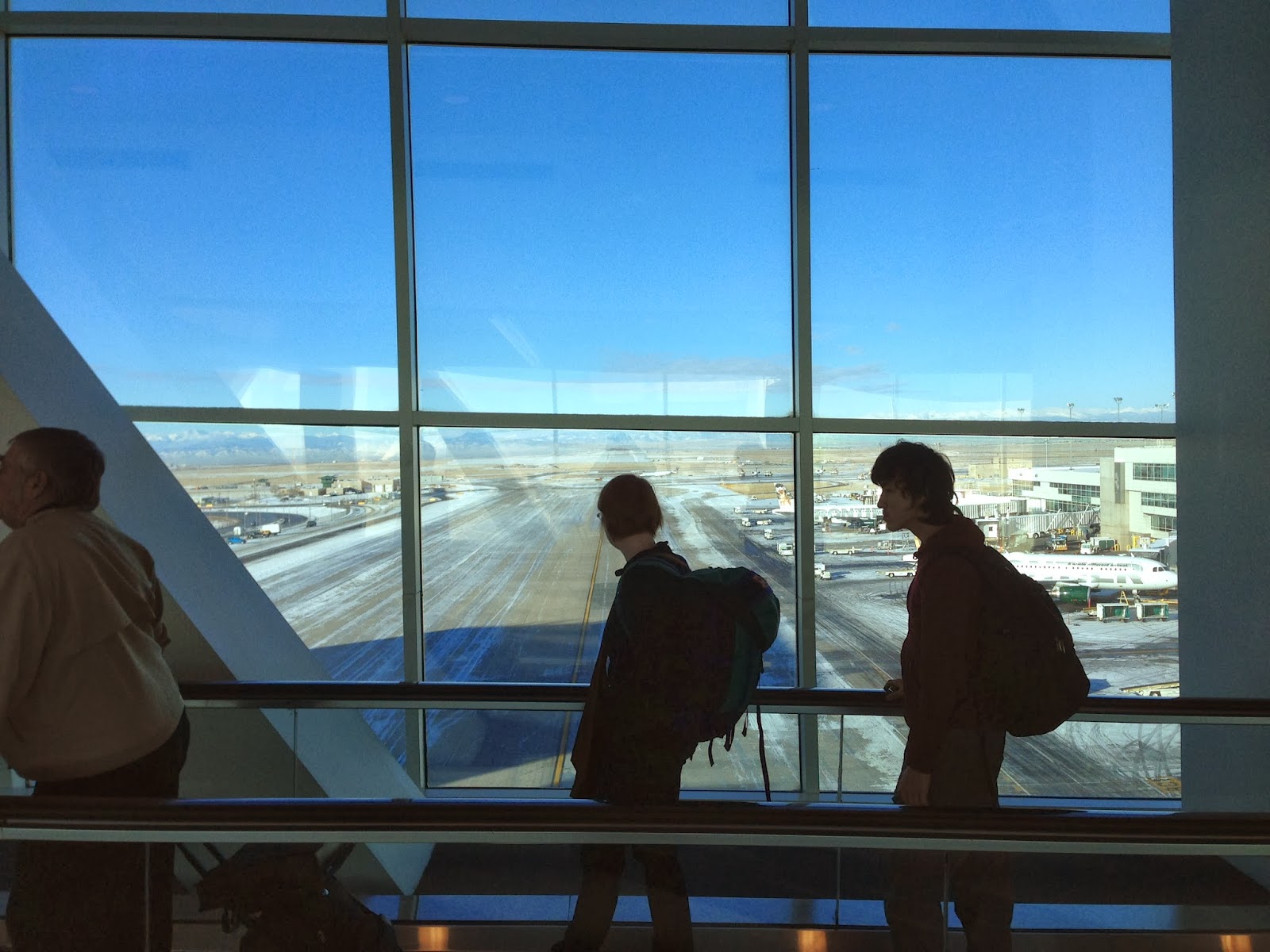 From several conversations with residents from the Chicago area staying at our resort, I was somewhat aware of the winter weather that was causing havoc in much of the United States. But, at no point did I think it was going to affect our travels from Cancun up to Denver, then on to Fort McMurray.

We arrived about 60 minutes later than expected at our gate in the Mile High City, still with a healthy amount of time to grab a sit down meal and find Ben a pair of pants.  He had one pair on the trip, but they got left balled up and left in the corner of his room, slightly damp, for a number of days, and were not in any reasonable shape to use, unless absolutely necessary.

Getting through customs ended up taking way longer than expected as there were only two agents on duty serving the long line of international travellers, and we were stuck behind a rather large group of German fellows, travelling to the States to ski, who each had to get processed and cleared separately.  Our window of opportunity was rapidly shrinking.

The security line was also quite slow, almost the opposite to what we experienced when we were traveling down, when all the stars aligned brilliantly to get us to our departure gate in just the right amount of time.  With a comfortable layover, it seemed that everything was working against us, giving us just enough time to get our food (to go) and Ben's pants.

It was shortly after we settled down at our eventual departure gate - it got moved a couple of times - that we started to get a sense of the massive cloud of uncertainty about our chances of getting home.  We talked to two oil sands workers, who had been down to watch the Heritage Classic, that were on their third night of trying to get a flight to Fort McMurray.  Their original trip got cancelled on Friday night.  They were on standby on Saturday night, but that one got cancelled, too.  They had hedged their bets, and also booked a late night flight to Calgary, on the good chance that the Fort McMurray run would get wiped off the boards for a third time.  Desperate to get back to town, they were quite prepared to rent a car and drive back if that's what it was going to take.

Another family from Fort McMurray was also on their third night of waiting, having paid for two nights in a hotel, food, etc. - all on their own dime.  You see, the airlines don't help out if a cancellation is a weather related event.  They were also on the standby list.

As we sat there watching the drama unfold, wishing the couple from Kalispell godspeed as their plane finally arrived after many hours delay, I was contemplating the steps we would have to take if our trip home ended up following in the footsteps of its two predecessors.  I would have to spark up my iPhone for the first time on the journey, paying enormous roaming charges, as I hadn't prepaid for anything.  I had been resolute in my determination to leave it in "airplane" mode for 7 days.  We would have to phone around to find a room somewhere, a commodity in short supply with the weather situation being so bad.  We would be hours in the customer service line, all of us exhausted, uncomfortable and stressed beyond measure.

"Here's the chain of events, as I know them now," announced the United Airlines gate agent, who was doing a brilliant job of staying calm, cool, collected and mildly amusing, despite the angst in the waiting area, now burgeoning with bodies.

"Once we get Kalispell on the way, next to load will be Fort McMurray, then Colorado Springs."

His timing was perfect, and the honesty hit the perfect note and the collected masses broke out in laughter.  Nobody was taking anything for granted that night.

Kalispell left, and shortly another regional jet took its place.  At this point, none of us knew it was the Fort McMurray plane, Colorado Springs, or another errant plane looking for an empty gate.  The gate agent was running around trying to find paperwork and confirmation of what plane it was for at least 45 minutes before we finally found out that it was us.

As all of this was happening, the estimated departure time on the big screen in front of us was getting later and later, as was our potential arrival time in Fort McMurray.

"It's going to be after two before we get home," observed Dylan.

We finally got on board, along with all the people we had met who were on standby, and proceeded to roast as the plane's air conditioning system was on the fritz. They had the door on the right side of the plane wide open to let in the cold Denver air to provide relief as the little air dispensers above the seats were blowing nothing but hot air.

"Wait till we're off the ground," Heather had admonished earlier in the evening.

We were on the plane, but there was nothing holding them back from taking us off if they couldn't get the heating/cooling system working properly.

"Ladies and gentleman, we apologize for the temperature," said the flight attendant.  "I have asked the pilots about eight times to do something about it."

I'm not sure if they were too busy to bother, or if there was something legitimately wrong.  At this point, I was mentally preparing for the abandon ship announcement and the sordid chain of events that would follow.  Personally, I would have been willing to strip down to my undies and bear the heat, if would could only get home that night.

Eventually, cooler air supplanted the hot, the cabin doors were closed and we slowed moved out to the de-icing staging area before booting off down the runway and into the Denver sky.

We made it home.  It was four hours later than expected, but we were enormously grateful, as things could have easily gone the other way.  We could still be in Denver right now, trying to scrape together a plan to get back during untenable travel times.

Generally speaking, I observed that people were very patient and kind.  They were equally resilient as resourceful in making the best of a bad situation.  Mobile devices became lifelines; every available electrical outlet was being used to give new life to batteries that were on their last legs.

Cancelled flights have been in the thousands the last few days, at a time of year when so many people are travelling.  It's going to be herculean effort to get everyone home and sorting out the rat's nest of lost flights, luggage, time, tempers and sleep.

We pulled into YMM after 3 am this morning, were the first through customs (we had no checked luggage - great choice by the way), into a cab and back home and in bed by 3:30 am.

"It is so good to be home," said Heather, as she gathered up the covers up to her chin.