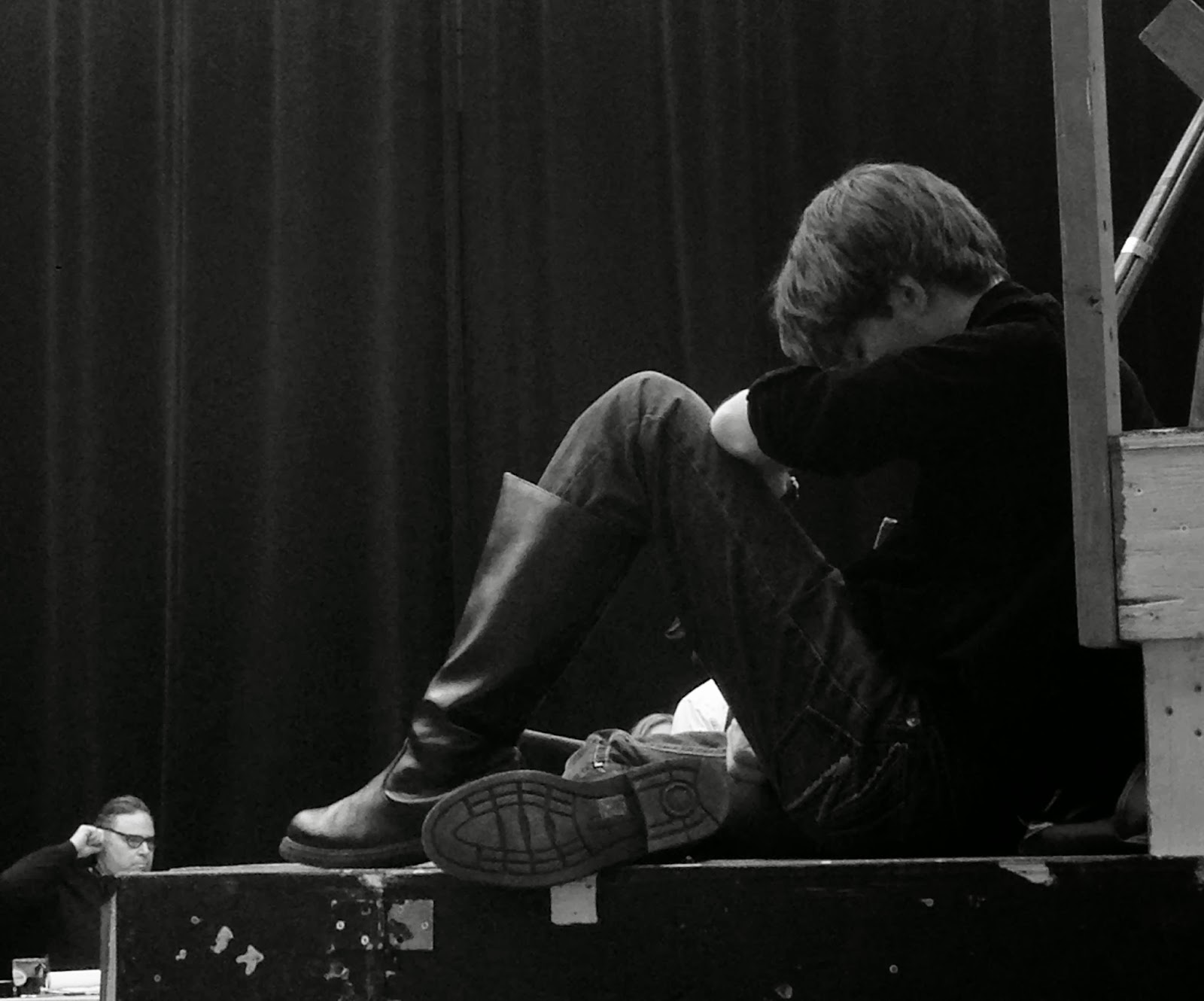 Ben pointed out that last night was the final time we would be working the show in the rehearsal hall.  I'm not sure how many people picked up on that little factoid as stage manager Steph Link walked us through the schedule for the next two weeks.  I didn't.

We will be in the rehearsal hall for one final evening, but we won't be rehearsing.  Tonight we do the costume parade, where each actor shows off their base costume and assorted changes of shirts, jackets, hats and various other things to the director and our costume designer.  This is the stage in the process where they might say:  "That shirt isn't going to work, we need a different colour" or "Those pants are too baggy, they'll need to be taken in".  With a cast this large, most of the costume decision will be set tonight, but things could change in terms of costume choices right up to the technical dress rehearsal. 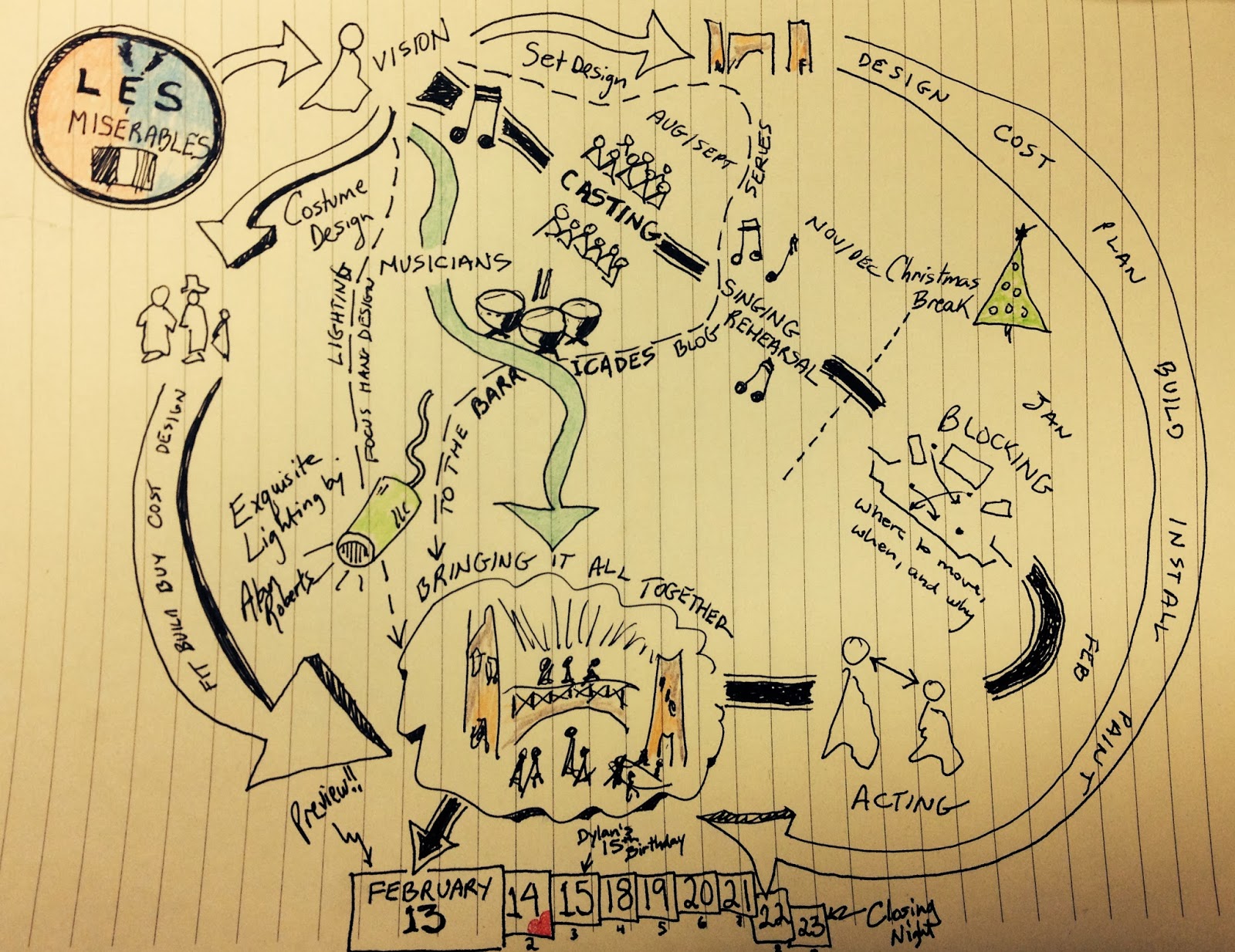 Director Claude Giroux talked about the process of creating your own personal road map, or your "footsteps" through the play.  I began the process of generating my map in the rehearsal hall, but will solidify the patterns and places as soon as we move into the main theatre space: where I enter and exit the scene, where I sit or stand to wait for my next entrance, where I will make my quick changes, and where my props will be stored, picked up and brought back to.  By the time we're running the show again, my "footsteps" will have become cemented and it will be just a matter of repeating the pattern from that point on to the end of the run.

"Your road map will become a thing of comfort to you," said Claude.

He's absolutely right.  The familiar places and patterns will quickly get you back on track when things go wrong, they will provide solace and motivation.  After awhile, you will begin to experience flashes of deja vu.  I feel like I've been here before, you'll think to yourself.  Don't panic, because if you do it right, that's exactly what will be going on.

He also talked about the sanctity of the space, the need to not only respect what's happening on stage by being quiet when you're waiting in the wings, but to remain engaged with the action of the play.

"The energy you give, even when you're waiting for your next entrance, is felt on the stage," he said.  "Conversely, if you check out, even for a few minutes, it will have an impact."

The admonitions and encouragements are in preparation for a phase in the process that is going to be a little daunting for those who have never been through it before.  Trying to move massive set pieces for the first time, navigating behind the scenes to make your entrances and getting familiar  with the enormity of the space is going to feel like a "train wreck" for the first few days.

As additional layers get added, including microphones, the band, technicians, fly operators, fog, costumes and finally, make-up, it demands a period of adjustment for all concerned.

"It's important that we call practice what I like to call PKU," said Claude.  "Patience, kindness and understanding."

The two days that are undoubtedly going to be the most difficult and demand the most of all of us are next Friday and Saturday when we do the cue-to-cue.  In the case of Les Mis, this is when we will work through the production one track at a time, bringing in all the technical elements.  Tough sections may be repeated over and over again to fix timing, levels and the synchronization of many moving parts.

"Remember one very important thing," he said.  "You are very far in front of everyone else at this point.  There is a whole team of people that need to catch up with you in a very short period of time.  Please be patient and kind as they try to do that."

Many streams, rivulets and currents of activity converge in the next 14 days.  It will all come together beautifully, as it always does, but there will be some turbulence, moments of panic, and uncertainty.  In the end though, the cast and crew of Les Mis will deliver a production that will be sweeping in scope, intensity, adventure and love.
Email Post