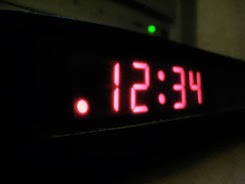 We are surrounded by numbers - attracted, inspired, angered, and motivated by them.  Numbers rule and define our existence in many ways.

I start waking up between 4 am and 5 am.  I know this because of numbers, pumped out by a tiny digital clock that rests on the window ledge about four feet from where my head sleeps on the pillow. Between 5 am and 6 am, I ease awake a number of times, counting down the minutes until the hour is over and I can get up.  In my mind, 6 am is when it is OK to rise.  I wonder what I would do if I didn't have the numbers as markers.

The number of days until we perform Les Mis in front of an audience, but who's counting?

The number of years my parents will have been married when they hit their anniversary in November.  It seemed like an ancient number when I was a kid.  It doesn't seem so ancient now.

The number of years that Heather's grandparents in Winnipeg will have been married when they celebrate their anniversary later this year.  Unfathomable when I was a kid, it seems completely plausible now, especially as Mary and Gordon are so incredibly vibrant and engaging, now well into their 90s.

The number of page views on this blog as of yesterday morning. What does that mean?  Not much really, as I write a lot and each post manages to attract a few readers.  Add up all the readers over the 860-plus posts and the number naturally gets rather large.

Like many, I sometimes get over-obsessed with numbers.  How many digits are in my bank account? What numbers appear when I step on the weight scale?  How many followers do I have on Twitter?

Over the holidays, I attempted and succeeded at practicing Internet abstinence.  I wonder what number abstinence would be like, how you would ever achieve it, or if you'd ever want to.

The numbers that showed on the alarm clock when I woke up in the middle of the night.  Isn't that special, I thought to myself, smiled, and fell back asleep.
Email Post