To the Barricades, Vol. 9

We did our first "stumble through" of Les Mis last night.  Two hours and twenty-two minutes (at least, I think that's was the director said, though he might correct me when he reads this) later, we were in our final pose, belting out the last sustained note in the celebrated musical.

"We need to get this down to two hours and fifteen minutes," he said.  "That's our goal between now and when we open."

Ben, my 10 year old son, got some extra blocking on the fly as a member of the youth gang last night.  Even though it was late when we got home, he felt compelled to grab a piece of paper, and write down all the directions before he went to bed.  He's taking this very seriously; a chip off the old block.

Another person who adds a level of intensity and intention to this process is Misty Oakes, playing Eponine.

"Kyle (Beeson) asked me if I am always this committed," said Misty, whispering in my ear.  "I told him that this was my seventh production in three years.  So, I guess the answer would be yes."

I am nowhere near as prolific as Misty, but in recent years, I've been able to do one production per season.

There are a few other long-time members of Keyano Theatre Company in the cast, including Chuck Smith, Terri Mort, Norm Sutton, and Jenny Price.  Chuck's tenure goes back the farthest, probably a full decade before I got started.

As "seasoned" as some of might be, each process is absolutely different and always a challenge.  I found myself cursing under my breath last night, as I got tripped up in a couple of different spots.  Lines that I had repeated over and over again, I still managed to flub up.  Dissonant harmony, the goal of one section of "The Bargain" scene, I turned into fingernails-on-blackboard harmony.  Ouch! 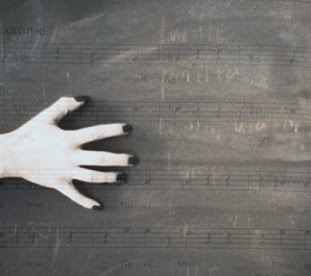 Despite my frustration, I embrace and celebrate imperfection.  Making a small timing mistake, not quite hitting the mark, or screwing up a word or two, gives me something to improve upon the following day.  Once all the mechanics are solid - the words, music, timing and blocking - then I get to continue my exploration of the character.

Even though you might have heard me mutter a bad word or two last night, I TRUST the process completely, and know that each time out I'm getting better, more confident, less reliant on my libretto, more trusting of my instincts.  Everything builds, in micro layers, toward the finished product that will be unveiled at the preview on February 13th.
Email Post