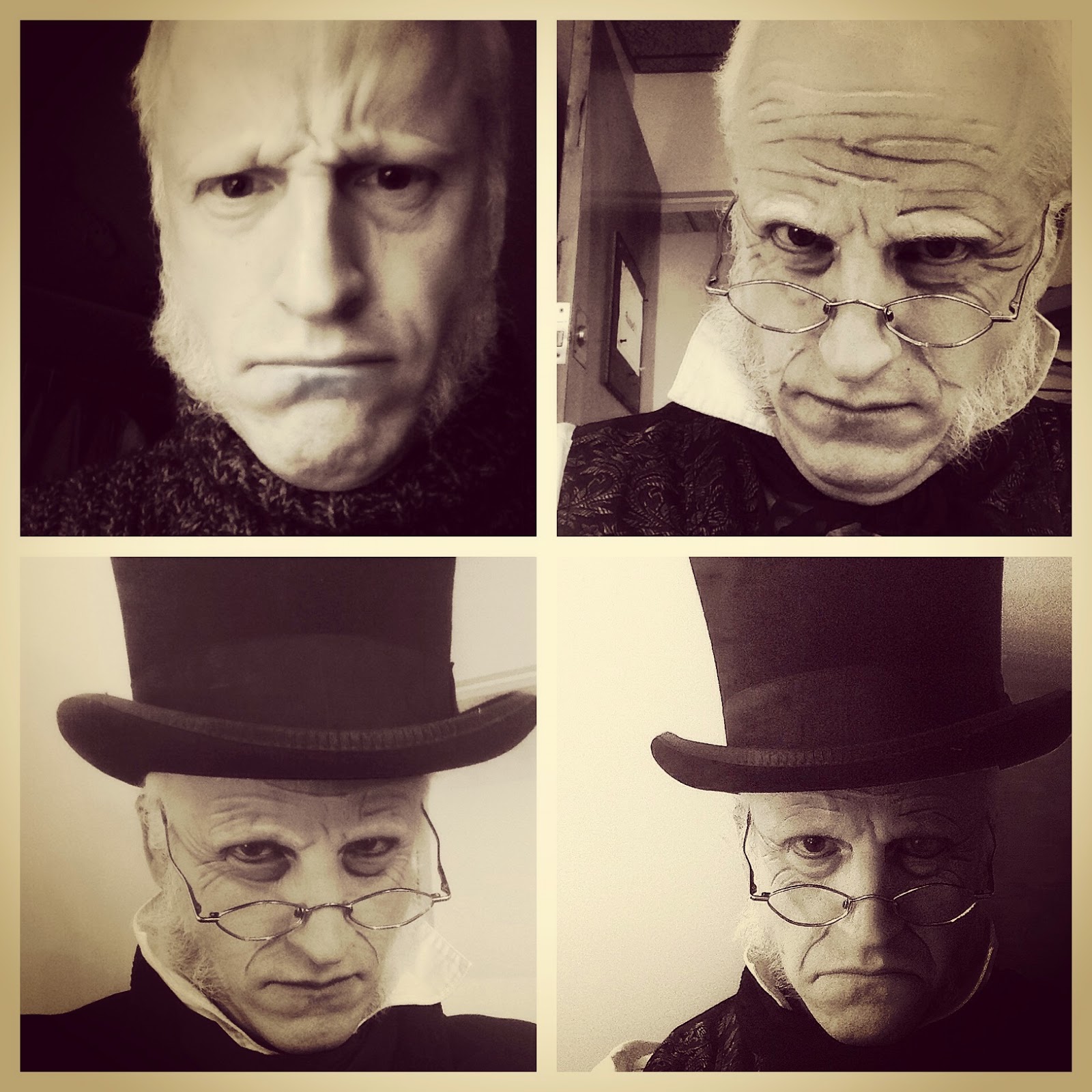 "Something is going to go wrong every single night," warned director Jacqueline Russell.  "It always does."

As much as we all try, invariably something goes askew at some point in the show for each of us: a paraphrased line, a costume malfunction, an errant slap on someone's buttock, or in the case of Wednesday evening's performance, a kid playing on his iPad out in the audience.

In theatre, you need to expect the unexpected and just go with it.  I was doing a performance of A Man For All Seasons at St. Thomas More College in Saskatoon in 1986 when a homeless lady quietly snuck into the theatre, sat in the front row, and proceeded to noisily open a bag of chips and crunch away as she enjoyed the most quiet and intimate scene of the play.

Last night, as I was watched the ghost of Jacob Marley and his gaggle of chains on the big chair in Scrooge's bedroom, I began to notice smoke emanating from the mantle above the fireplace.  While half my brain was trying to figure out the ghost in my midst, the other half was becoming increasingly concerned that beneath the smoke were flames.  As it turned out, the fog had taken on a life of its own in that scene and had some fun playing mind games with me.

Kenny Jones and I were performing A Zoo Story by Edward Albee in the boardroom at the Redpoll Centre during interPLAY one summer.  A piece of fabric slipped off the wall on stage right, barely within the range of my peripheral vision.  But it was enough of an unanticipated distraction that we unknowingly dropped a couple of pages of dialogue.  Claude Giroux was the only one who picked up what had happened, and only because he had studied the play extensively at university.

As we were coming to the end of Act One on Wednesday evening, I couldn't help but notice extraneous movement in the house, as the younger members of the audience darted back and forth from their seats to the exits.  As it was a corporately purchased show and as many of the guests had brought their little ones, expecting the unexpected took on a whole new meaning.

Every audience is different.  Where and how they respond changes every performance.  That's the beauty of theatre: the energy of the show's final component, the audience, is utterly unpredictable.  And no matter what happens and who is there, as an actor you need to use it.  During preview, a bunch of Stephen Cantwell's friends were in the front row.  Their rambunctiousness affected the entire crowd and resulted in an amazing night of reactions, fun and sustained applause at the curtain call.  On other nights, those in the front rows have been quiet as mice, which again, changes the dynamics in the room.  Last night, we had a character in the audience near the front - bless him.  He seemed to single-handedly ignite the rest of the crowd, resulting in an extraordinary audience-actor scenario.

I felt great about my performance last night, though it was not without its flubs and foibles.  While I strive for perfection in my lines, actions and intentions, I doubt very much that I'll ever get there; and I'm OK with that.  Each night, I set a personal goal for myself, and seek to make discoveries.  I keep finding new things, making fresh connections, and deepening the experience of playing Ebenezer Scrooge.  That's what it's all about for me.

It is important for me to acknowledge Karen Sturgis for saving me on Wednesday night.  I completely blanked when we arrived at Christmas morning.  Like the pro she is, Karen fed me the line I needed to get back on track.  Bless her heart!

I've asked a number of my colleagues in this play to share their favourite moment in the show.  I have two.  The death of Tiny Tim scene gets me every time.  I instantly think of my cousin and his wife who lost a child in the first few days of his life.  That death affected my father in a deep and powerful way.  The weight and sadness he felt courses through my veins as Tim Heggie as Bob Cratchit talks about imagining Tiny Tim's hand slipping into his.

The other is the moment that Tiny Tim (Emily or Bryan) and I meet centre stage to join the curtain call. The swell in the applause is unforgettable and intoxicating as Christmas spirit swirls from the audience and on to the stage and back again.

We have three performances left: tonight, tomorrow afternoon at 2 pm, and tomorrow evening at 8 pm.  The following day, the set will get dismantled and tucked away in storage somewhere.

During set designer Roger Schultz's presentation last weekend, he eluded to the fact that there has been some discussion of following the lead of other major theatres in bringing back A Christmas Carol on a much more frequent basis.  It had been almost 20 years since it was last produced by KTC.  Wouldn't it be great to turn this production into an annual or semi-annual Fort McMurray tradition? It is a great story and a wonderful way to usher in the holiday season.  It's also a great reminder that this is a time when "want is keenly felt", and that we need to think heartily about those who are in need.  Therein lies the true spirit of Christmas.

"God bless us, everyone," says Tiny Tim to end our production of A Christmas Carol.

You're right Tim.  You're so right.