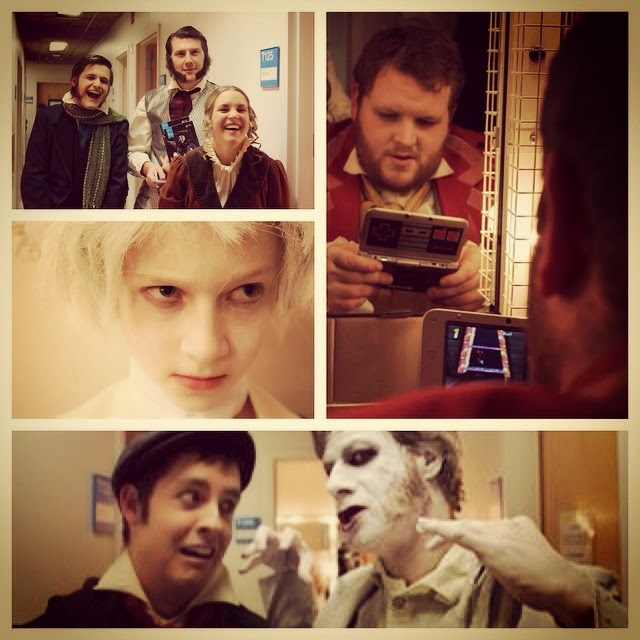 "Places," said Jack Bartlett, one of the assistant stage managers at about 7:55 pm on opening night.

Each of us had been anticipating the call in our own way, some laughing and joking around in the dressing room hallway, others were touching up make-up or putting on the final layer of their costume.  I like to sit quietly in those dying minutes before the Christmas Carol train gets on the tracks.  Half my brain was tracking through the upcoming scenes, while the other half was considering a nagging bladder.

Too late, I thought to myself.  No time to pee before starting the show.

I pass through the germans (curtains that run perpendicular to the proscenium that hide the wings) and position myself on the upstage side of the leg (curtains that hang parallel with the proscenium) furthest upstage.  The sound of the audience is distinct, conversation and laughter fill the distance between where all of us are standing, the waiting stage and the collected masses.

As I stand there motionless and focused, I reflect on the many times I've waited patiently in the wings for a show to start in various theatres and performance spaces scattered across Alberta, BC and Saskatchewan.  Standing in the wings at Keyano is extra special for me.

"I could walk around this place blindfolded," says Scrooge as he returns to his old school with the Ghost of Christmas Past.  I feel the same way about the Keyano Theatre stage.

In just a couple of performances, a pattern has already started to emerge.  I stand quietly on my spot in the wings, Karen Sturgis (Mrs. Dilber) pops her head through the part in the curtains a couple of times, struggling to see in the half-light, before Zachary Barrett (Old Joe) passes through and takes his position just a couple of feet away from mine.

After the curtain speech and as the lights dim to signal the carollers to move on to the stage, Kathleen McGrath, a member of our stage crew, comes in and the revolve operator slips through and into his clandestine cavern beneath the grand staircase.

"Dead as a doornail," says the undertaker, as the story begins to unfold.

"Hard as flint," says Mrs. Dilber about Mr. Scrooge, which is my signal to rotate my body 90-degrees and get ready for my entrance.  Moments after the clock tolls seven I make my move and get on the train.

This pattern will repeat itself with little if any variation for six more performances.  Everyone living in the land of backstage will have their own unique set of things that happen in the minutes that tick away before the show begins.  But we all get on the train together, with purpose and passion, to tell a story has moved hearts and minds for over 150 years.


For tickets for A Christmas Carol please click here.  Our next performance is this evening at 8 pm.