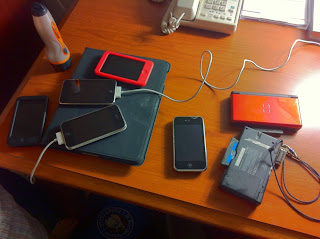 "Among the four of us, how many devices did we need to plug-in?" I asked over breakfast as we were getting ready to leave Lloydminster to return home to Fort McMurray following our whirlwind trip to Kamsack for Mom and Dad's 50th wedding anniversary.  It morphed into quite the discussion as we attempted to agree on a number.

The question was on my mind as the night before I had discovered that most of the traditional devices in the hotel room (television, lamp, microwave) had been left unplugged, presumably by the previous occupants who, like us, needed to recharge a gaggle of gizmos.  Doing an inventory of devices that need to get reconnected is likely not on the to-do list of most housekeeping attendants.  Nor should it be.  Any hotel worth its salt should have a robust recharging station integrated into their rooms.

Hotel rooms are no longer just a physiological recharging station, a place to rest travel weary bones and buck up for the next leg of the journey.  They are also an oasis for iPhones, Androids, iPads, laptops and myriad digital devices that are ubiquitous across the generations.

When I was young, it was all about the batteries.  The Sony Walkman, and all the assorted knock-offs that popped up in the eighties, required DC juice.  The only use for hotel plug-ins back in those days would have been for the gaudy boom box that somebody decided to bring along for the ride.

I'm guessing the new generation of hotels, airports, bus stations and vehicles have figured this out.  I'm "guessing" because outside of our new international airport terminal in Fort McMurray - which has USB and AC plug-ins at every seat - I haven't experienced any other facility or vehicle that addresses this recharging dilemma.

Before we went to bed in Lloydminster, it was a little bit of a negotiation as to who would get to plug-in for the night.  I acquiesced my claim so that Dylan could bring his iPad power up to snuff for the next day.  Heather plugged in her iPhone in the bathroom, which turned out to be a pointless exercise, as its breaker had been tripped and not reset.  Ben must have found a spot on his end of the room.  But it was an interesting dance as everyone darted around the room searching for power.

I wonder if this is just a technological phase, a transition to something else?  Perhaps the next generation of devices won't need to be recharged at all, at least not in the way they do now.  Maybe the power will be pulled from the air, no different than the way devices pull data.  In the meantime, I'm thinking it's time to bring our own recharging station when we travel.  In many ways, it's as essential as the toothbrush.
Email Post