It really felt like a bonus day, as everything we had wanted to do, we had done.  It would be a chance to relax, do whatever our hearts called us to do, and spend our final full day together before leaving for Phoenix.  Heather will be accompanying us there today, then driving back to Sedona for an additional week, doing some training.

The weather forecast for yesterday called for a good chance of rain, but it turned out to be a beautiful day, with interesting cloud formations and many sunny breaks.  And while I could have gone out to take pictures in the morning, I chose to do some drawing instead, hanging out with Heather at the dining room table while the boys slept in. 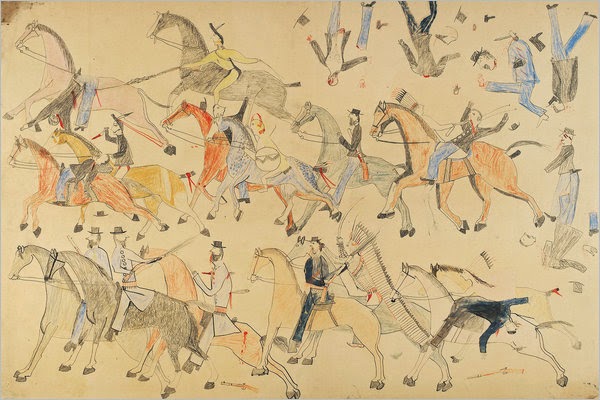 I had purchased a number of postcards at the trading post around the corner, and decided to do a freehand sketch of Red Horse, Sioux Chief.  He was an artist in his own right.  In the late 1800s he created a series of drawings illustrating his part in the Battle of Little Big Horn. 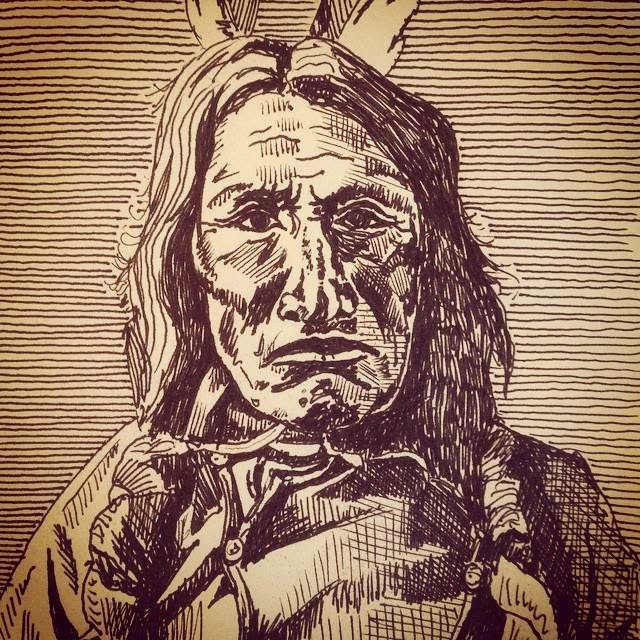 The drawing felt like it needed colour, so Heather and I went on a stroll to find some colouring pencils.  We didn't have much luck in the tourist-centric shops located in Upper Sedona until one person suggested trying the Sedona Art Center just around the corner from the rental condo.

"Do you know where I might find colouring pencils?" I asked the lady at the counter after having thoroughly searched the Center.

"Flagstaff or Prescott," she said.

"Do you mean that in a place famous for its artists, you don't have a single art supply store?"

"Yes, sadly" she replied.  "The last one closed down last year."

I was a little taken aback, but like Hope said on Facebook, Sedona is a tourist destination, not your normal, run-of-the-mill small city. 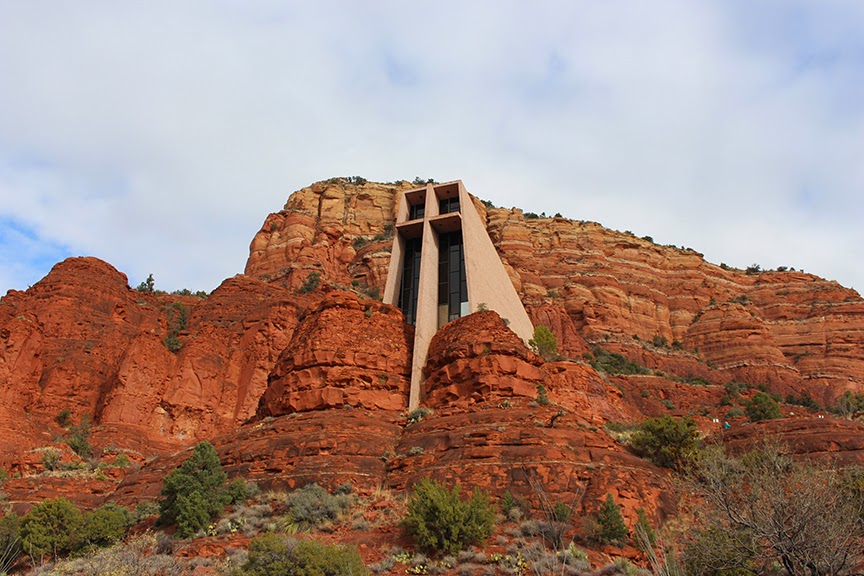 We swung back to the condo, grabbed the boys, and set out to see the Chapel of the Holy Cross, the most visited attraction in the Sedona area. 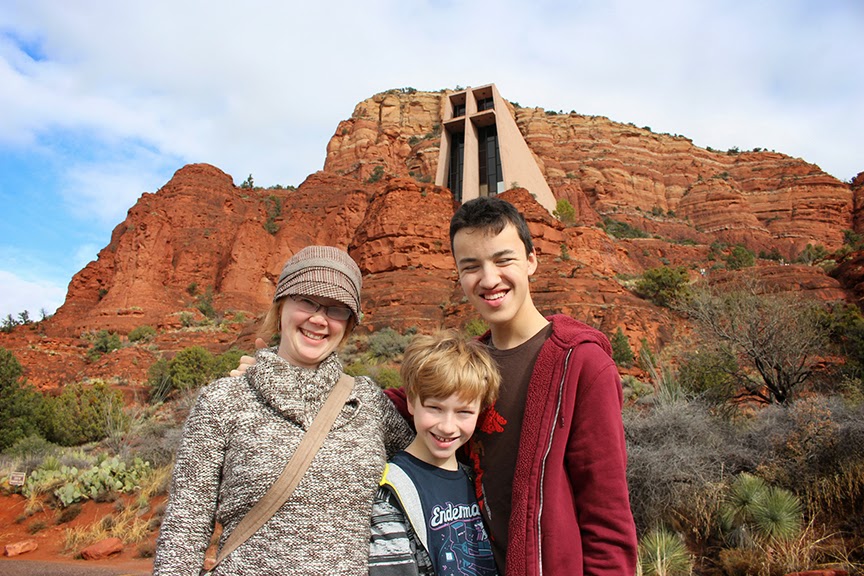 Completed in 1956, the chapel was designed by Richard Hein, though inspired and championed by local rancher and sculptor Marguerite Staude, who got the idea after seeing the newly constructed Empire State Building in 1932. 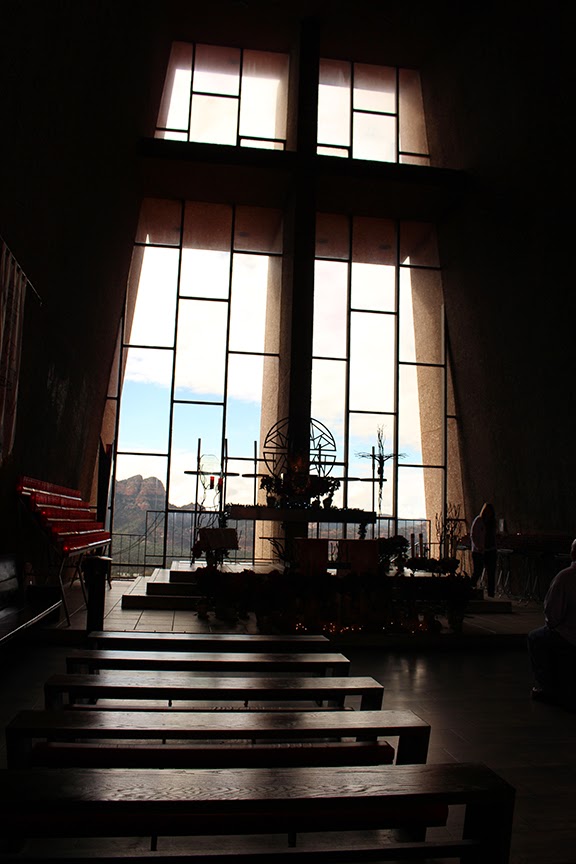 Constructed high in the red rocks, it is a study is elegant simplicity and the power of line.  The chapel, intimate and peaceful, provides a spiritual experience and a stunning view of the valley below. 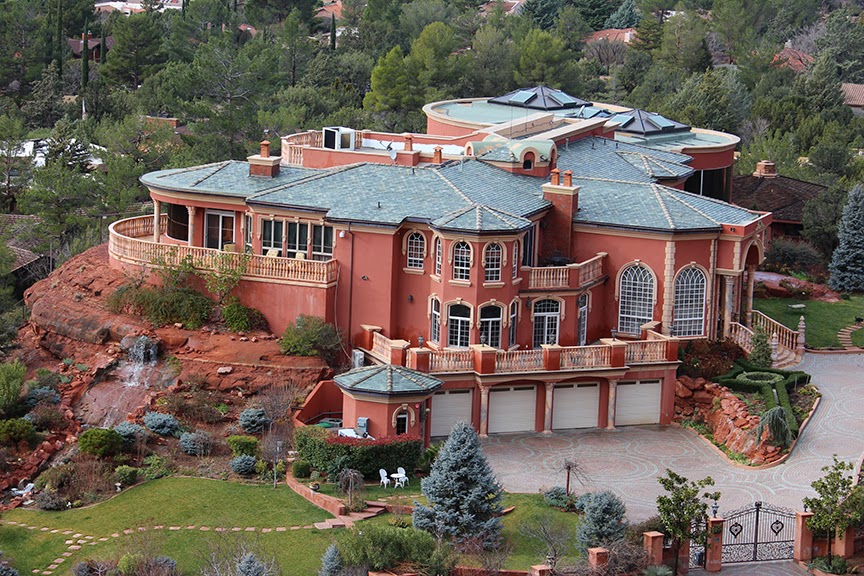 Outside the church are a number of great viewing areas.  Off to the right is an uncompromising look at one of the largest mansions I have ever seen.  The gardener was trimming trees in the back, while a little dog was running around the driveway as we looked down.  It stands to reason that if the Chapel of the Holy Cross is the most visited spot in Sedona, then that mansion has more eyes on it than any other.  Either these folks love the attention, or they experienced the biggest "Oh shit" moment of their lives when they realized where they had decided to invest many millions of dollars. 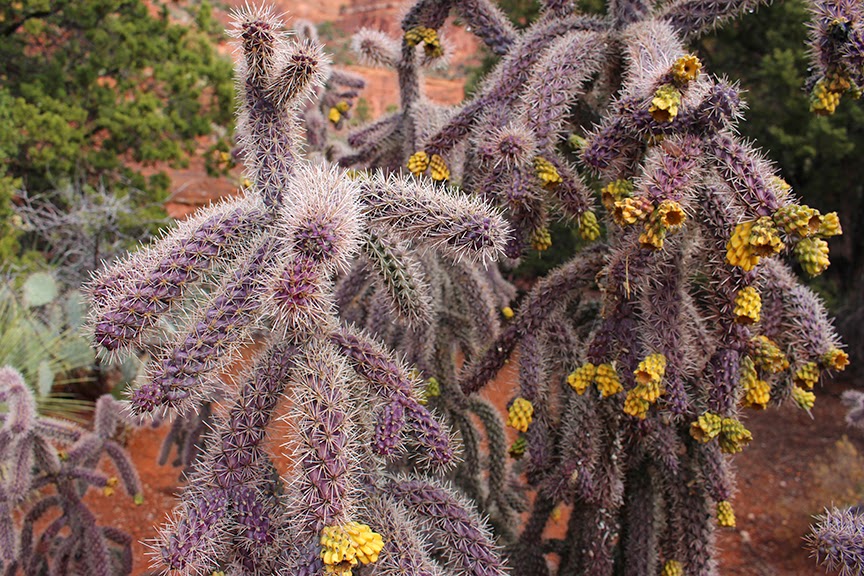 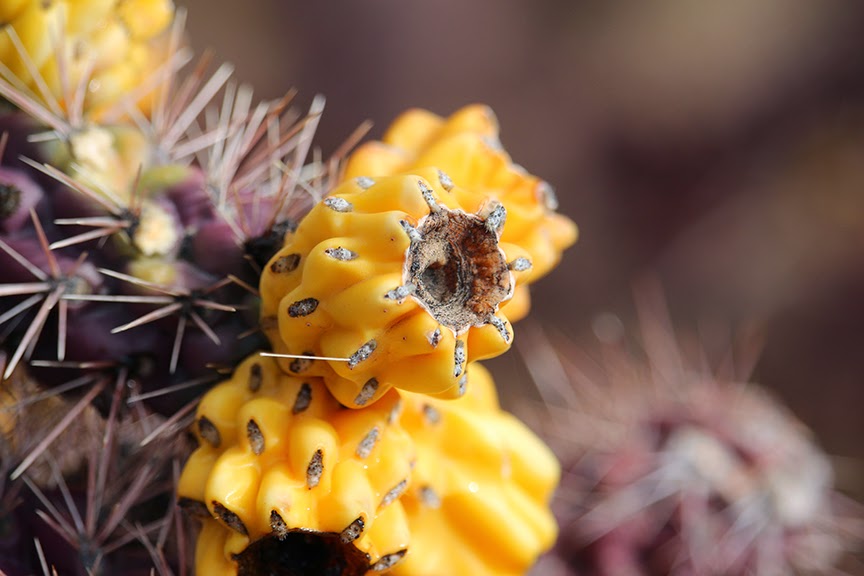 I was struck by some of the cactus plants growing alongside the winding road up to the chapel.  Up until this trip, I had never thought of this prickly plant as being beautiful.  But, I have found so many examples of great shapes, colours and compositions.

We had hoped to do the climb up the sunrise rock on the way up to the Sedona Airport, but with limited parking halfway up the mesa, we were completely out of luck. Lots of other folks had the same idea. Instead, we decided to return to the spot where Heather had sprained her ankle the year before, the Amitabha Stupa.

Getting to it was a bit of challenge, as the path was rough and rocky; I was convinced one of us was going to repeat history.  We walked and walked, and just when I was going to give up on finding the Stupa, it appeared. 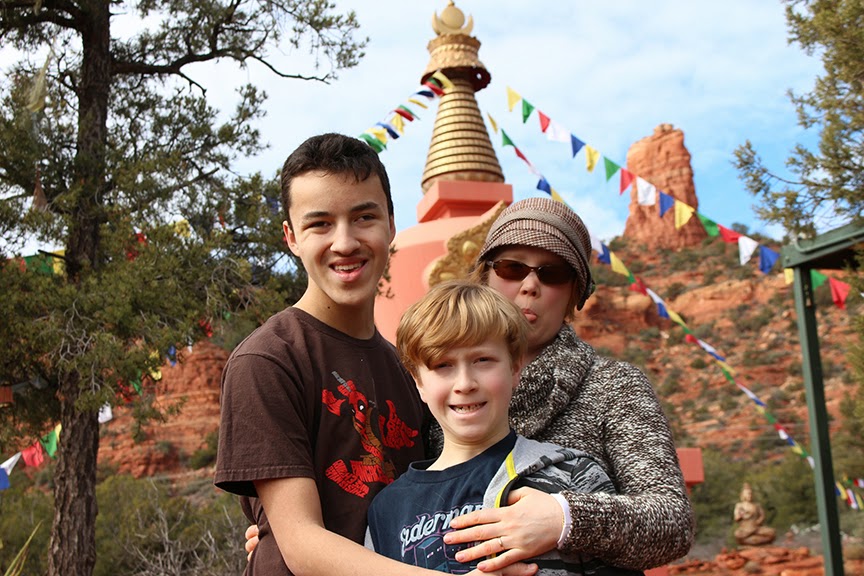 This turned out to be my favourite spot in Sedona, for a whole series of reasons.  A sacred place, many thousands of people had come there, with their intentions, hopes, dreams, and love.  I could feel it.  Everywhere I turned there were splashes of colour, surprising objects hanging from the trees, and a stillness, only interrupted by the sound of the jackhammer off in the distance. 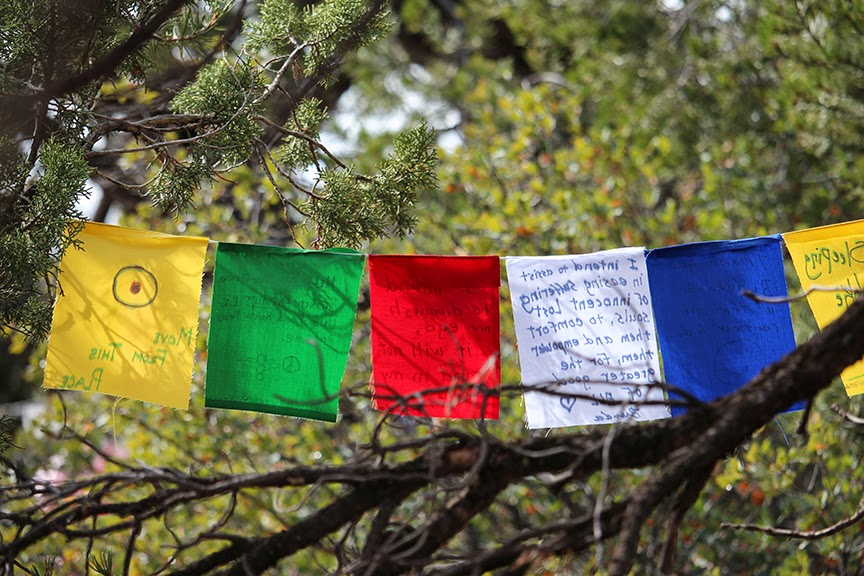 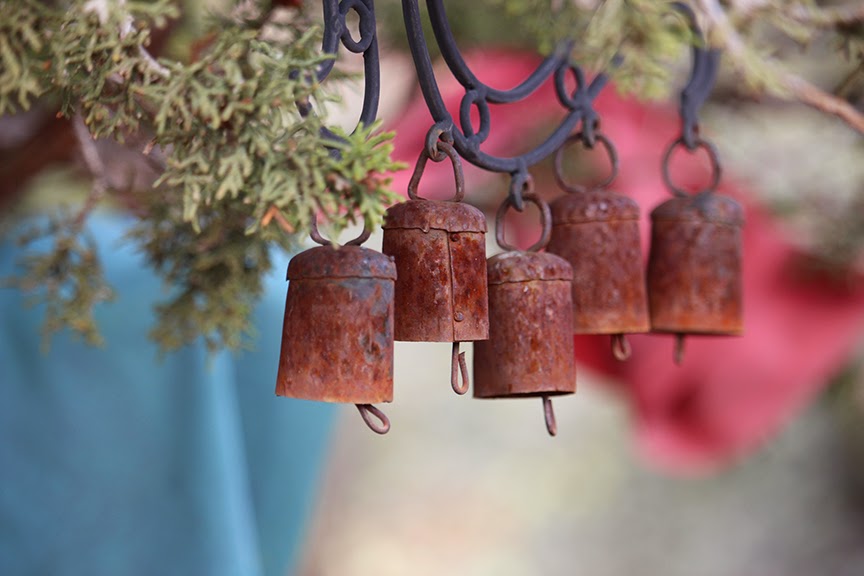 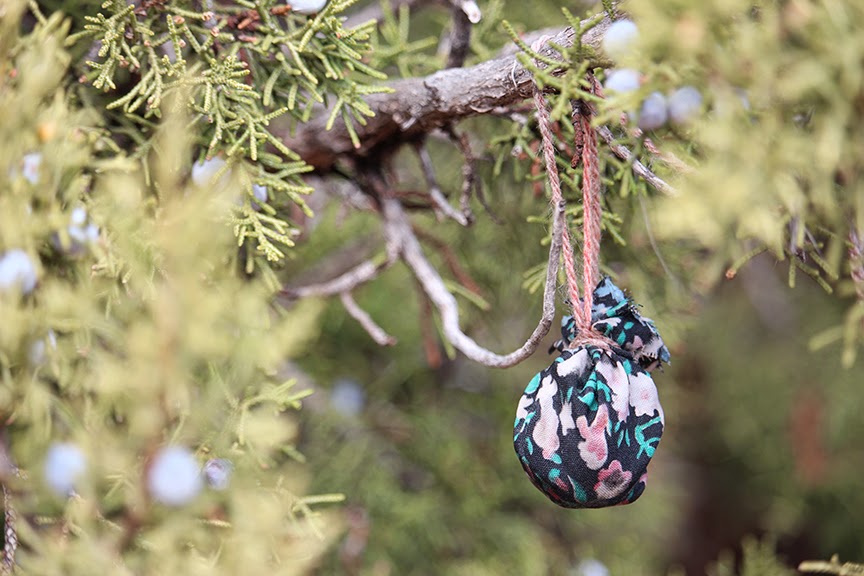 There were also curious piles or rocks everywhere, some off in the periphery, others near the centre of the Stupa, all containing a story, an intention, spirit. 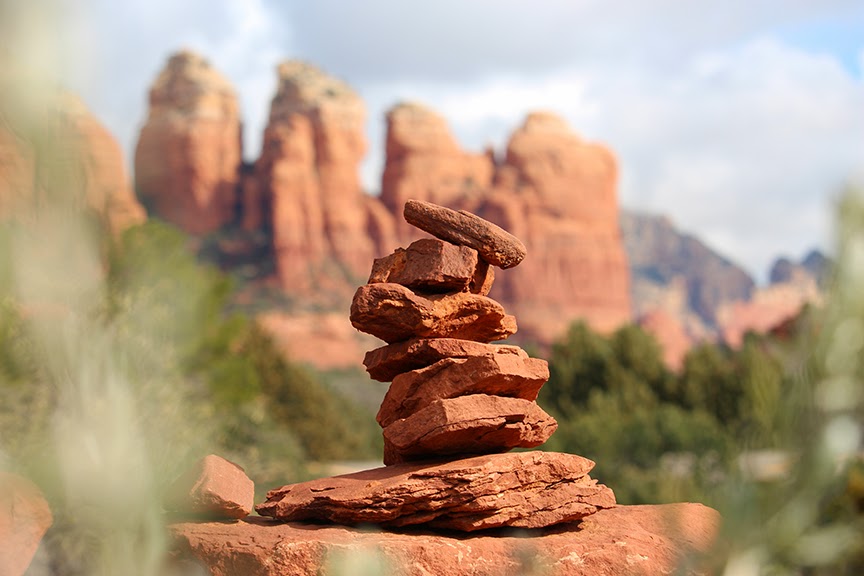 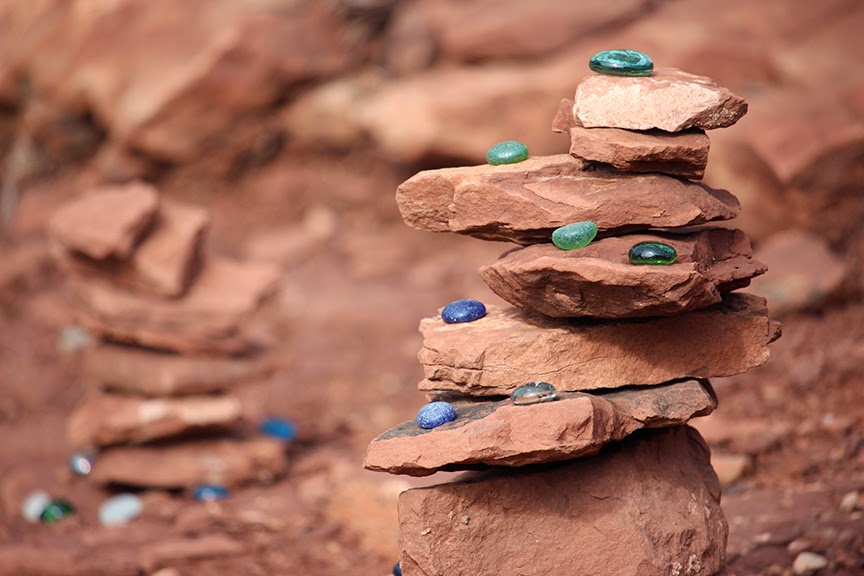 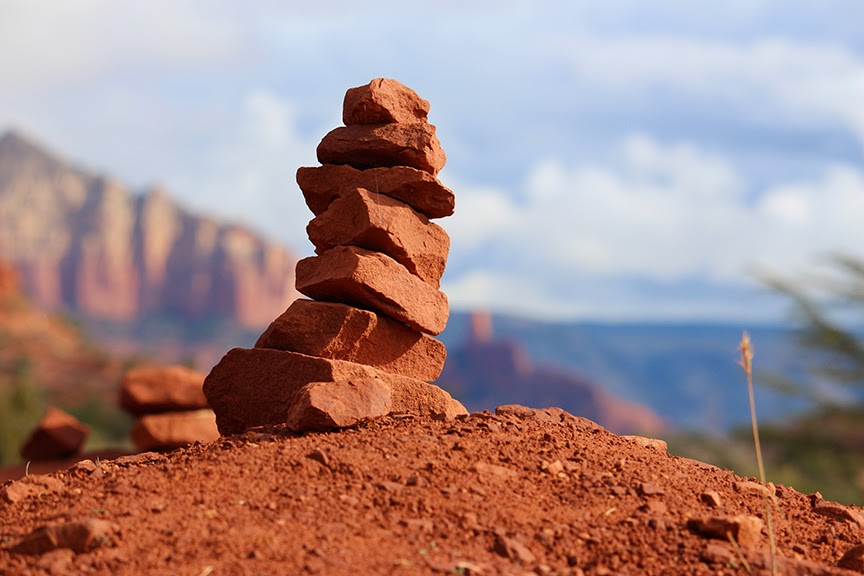 When I stopped, and allowed the silence to embrace me, the sounds of birds, many species, seemed to turn up their volume.  I became aware of incredible sounds, in the tree above, in the brush ahead, and in the shrub on the other side of the path. 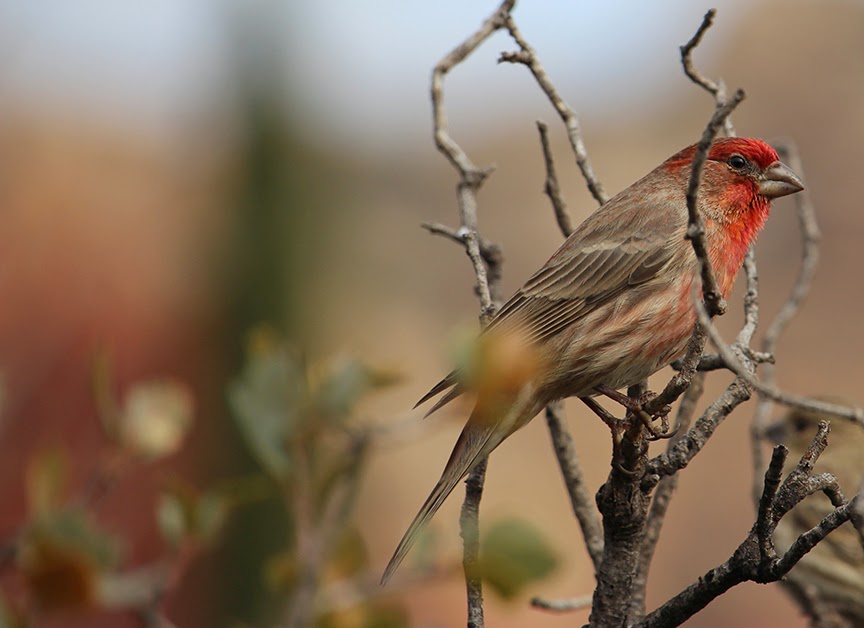 A house finch decided to pose for me, perched on the upper reaches of a bush bustling with activity.  At one point, four other birds decided to pop up for a brief second, though my shutter finger wasn't quick enough to catch it. 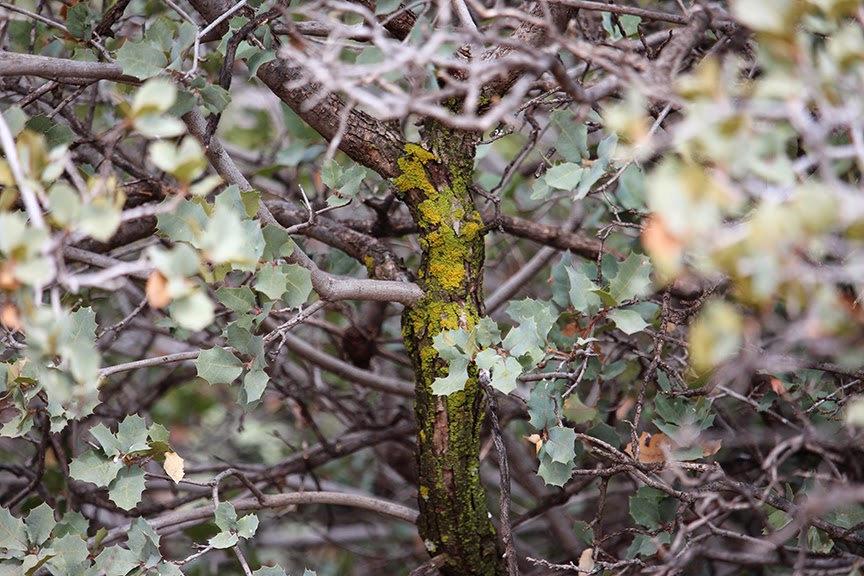 As I moved stealthily through the thickets and trails, new sounds emerged, beautiful cooing noises that were utterly distinct from the others.  What I think was a Gambel (of the quail family), appeared for a brief moment, just enough to catch my attention, before waddling off in the opposite direction.  I got the distinct feeling that she was leading me away from the nest.

I never did get a clear shot of the Gambel, but I enjoyed trying to find her, as she led me around the site, playfully giving me brief glimpses, just enough to keep my attention. 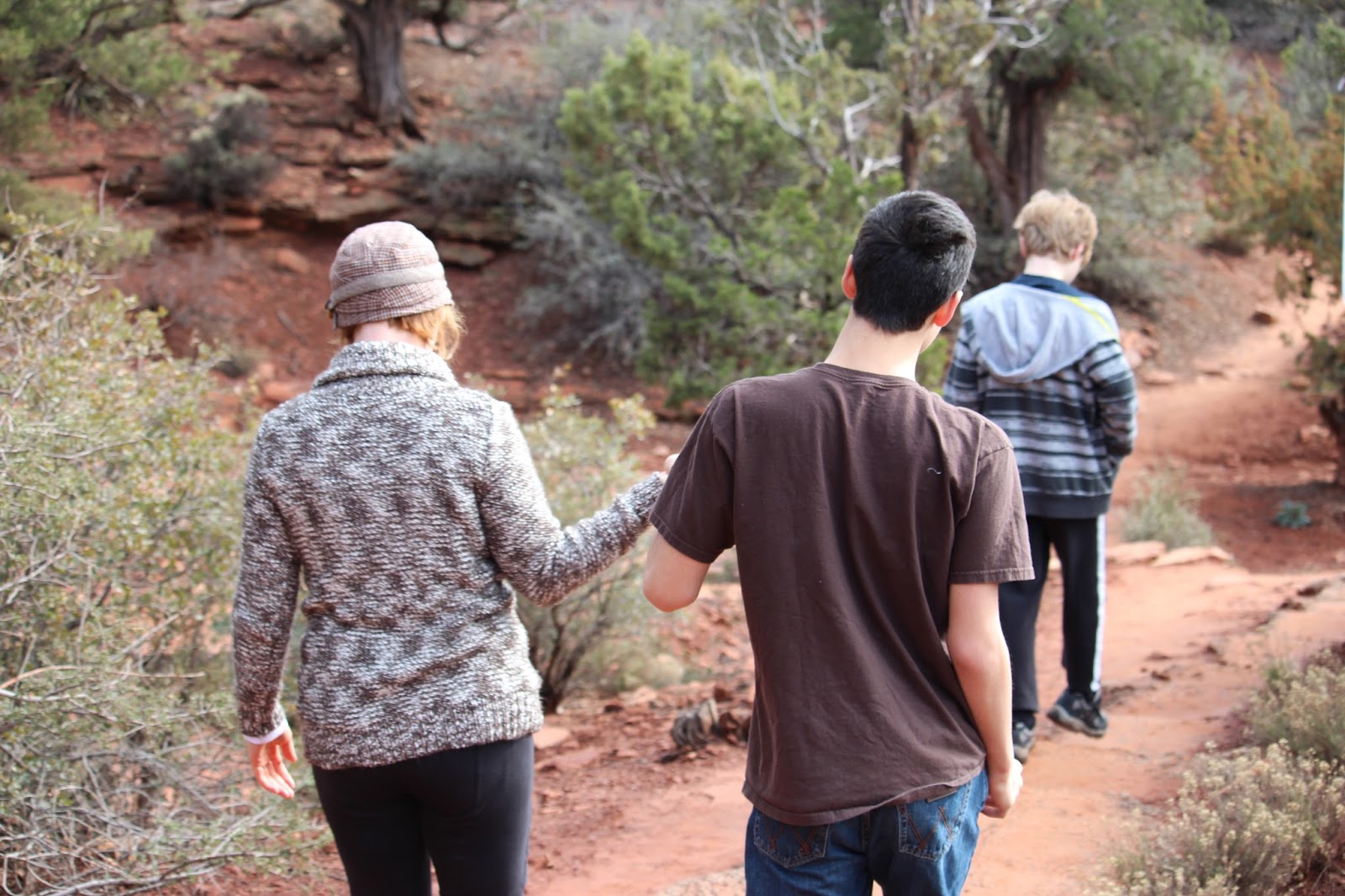 As we walked as a family down the trail to the street, I was feeling tremendous gratitude, for being able to experience these incredible places together. 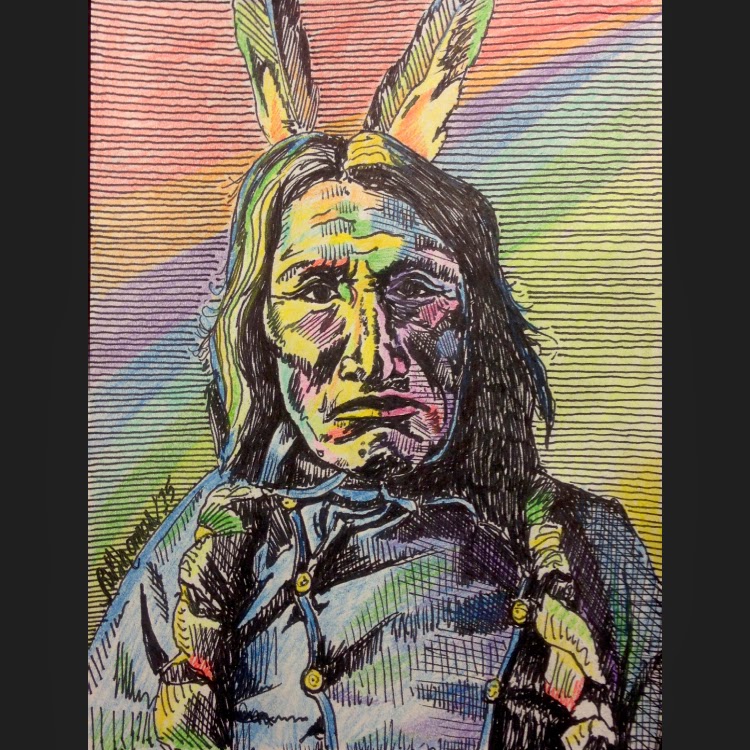 I added some colour to Red Horse, as we had found some pencils at Staples on our way home. Then we did some shopping in the afternoon, doing our last tour through the now familiar places that dot both sides of the street in Upper Sedona.  For dinner, we returned to Picazzos, the place we had went for lunch on our tour day with Jesse Kalu, the flute player.  He had been on my mind most of the day, as I kept looking at the flutes in the various stores we entered.  But, something didn't feel right about buying any of them, as Jesse had several flutes for sale.

"You should just call Jesse, and get him to come over," Heather had suggested earlier in the day.

We parked at the restaurant, and as luck would have it, Jesse's Jeep was parked outside.  He was inside, enjoying a lovely dinner with his daughter Nika.  That was the sign I needed.  We made the arrangement that he would pop over to the condo later in the evening with a number of different flutes, some made by him, others by one of his proteges. 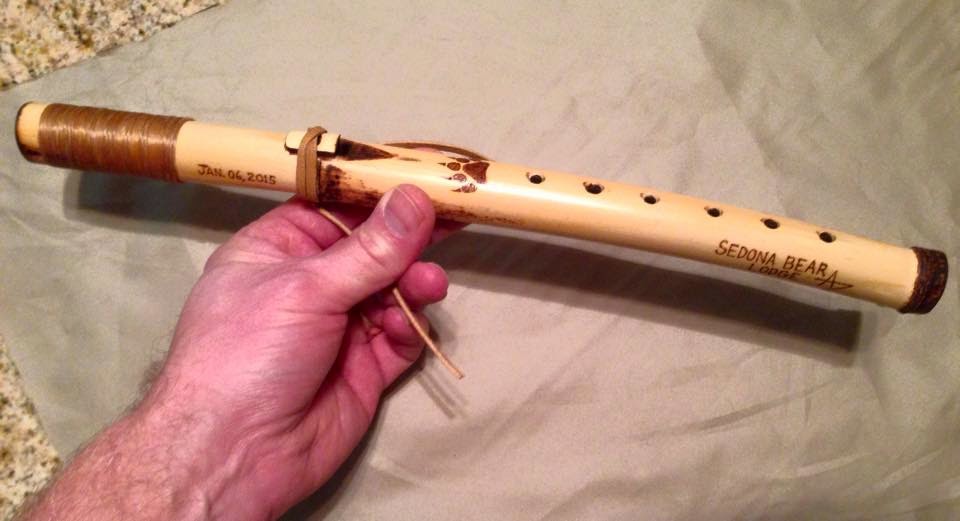 I ended up choosing an A# bamboo flute made by Myles Oshima on January 6, 2015, the day before we left Fort McMurray for Arizona.  It sounded right; it felt right.  I also gave him the coloured sketch of Red Horse to give to his daughter.  That felt right, too.

This morning, the boys and I will pack our things and join Heather for the drive into Phoenix, where we will have two full days of the urban experience before flying home on Thursday. 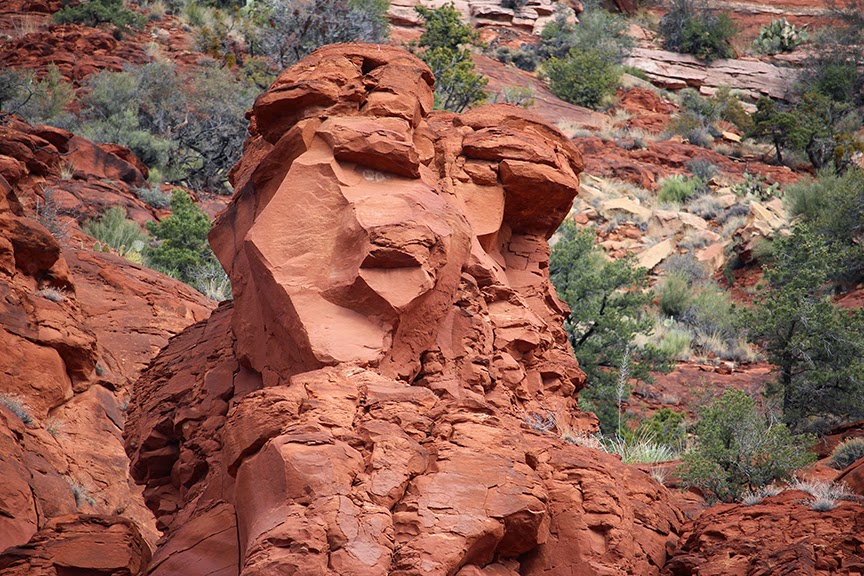 Sedona has been wonderful.  I want to come back, to experience some of the other seasons.  As I said to the snow birds from Ontario in the pool last night, I could easily see choosing Sedona as our winter destination when our retirement years arrive.  It has the perfect mix of art, energy, and natural adventures.