I sat here, in this spot at the table, lights dimmed, coffee brewing, as the dark sky began to glow with the approach of the sun, hidden behind Snoopy Rock and Courthouse Butte beyond.  There was to be a break in the weather, and if I had any chance of catching the sunrise, Sunday was going to be the day.

At first, I thought it was going to be a no-go as it appeared to be a fully overcast day.  Then, as the sky lit up a bit more, I noticed a break in the clouds in the exact spot where the sun would pop up.  I scrambled upstairs to get dressed, told Heather where I was going, and shots out the door.  From getting in the rental vehicle to running up to the top of the sunrise rock located near the Sedona airport mesa, maybe 7 minutes had passed. 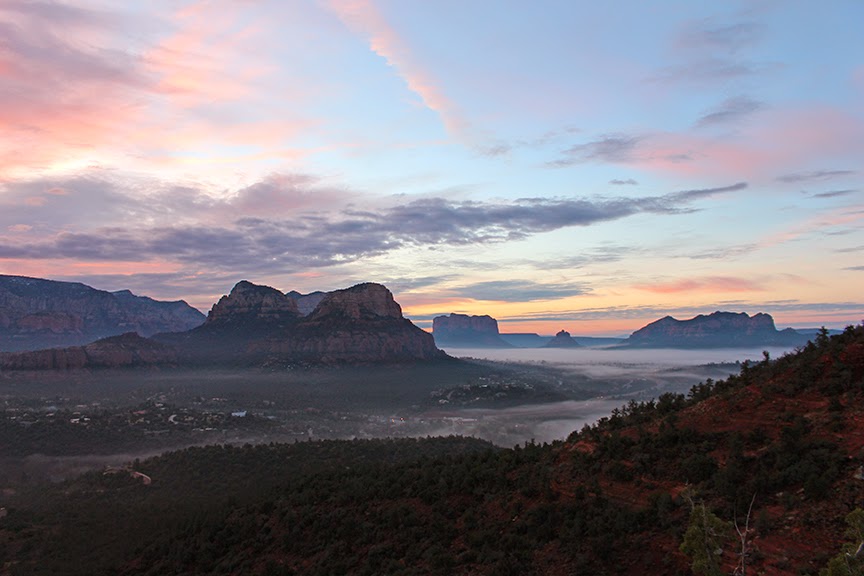 I was out of breath, but I was with a handful of other people breathing in a most magnificent sunrise in Sedona.  Most were taking pictures, others were meditating, channeling the energy of a new day.  I did my best to capture the scene, though I recognize I need more technical training with my camera to maximize these kind of moments. 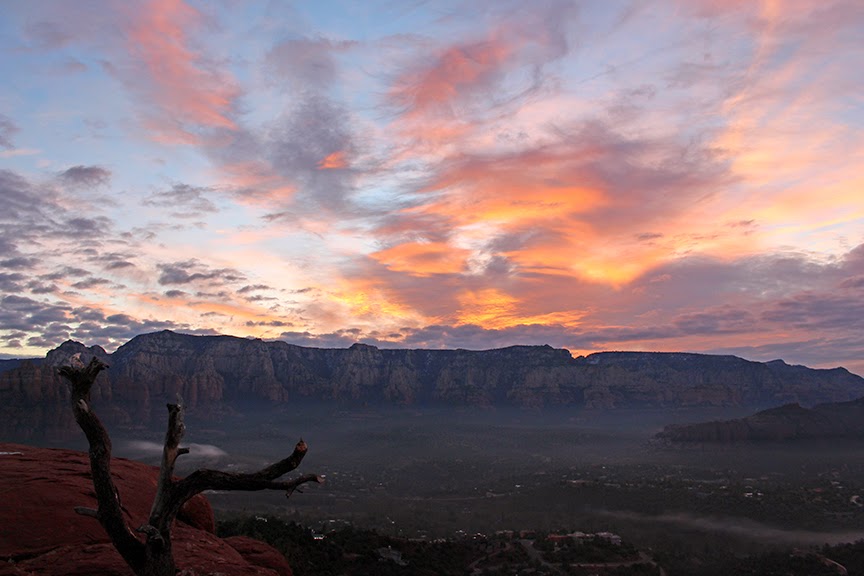 While there were some rain clouds off in the distance, it looked like it was going to be a dry day to do some hiking with Ben. 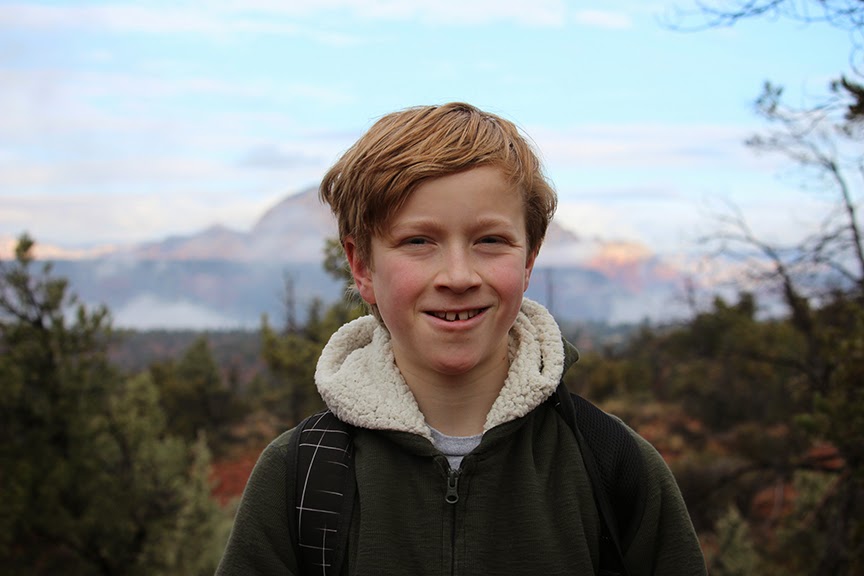 He's been wanting to climb something since we arrived.  I got back from greeting the morning and nudged him awake. 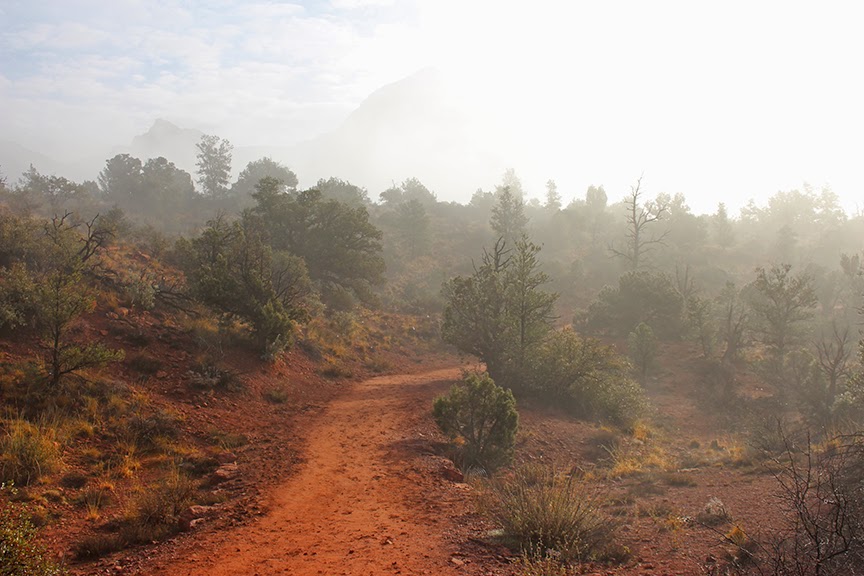 Our morning hike was not what either of us suspected, as I didn't fully understand the trail systems.  We ended up taking the Bell Rock Pathway, which was a wide sandstone path that actually runs from Sedona to Oak Creek on the other side of Bell Rock.  There are multiple loops, not dissimilar to what you find at the Birchwood Trails back home, that take you to higher elevations. 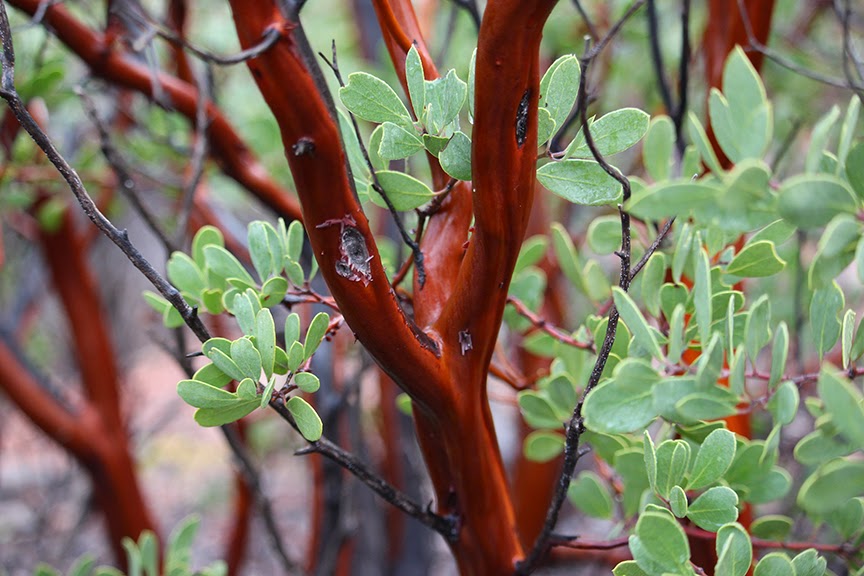 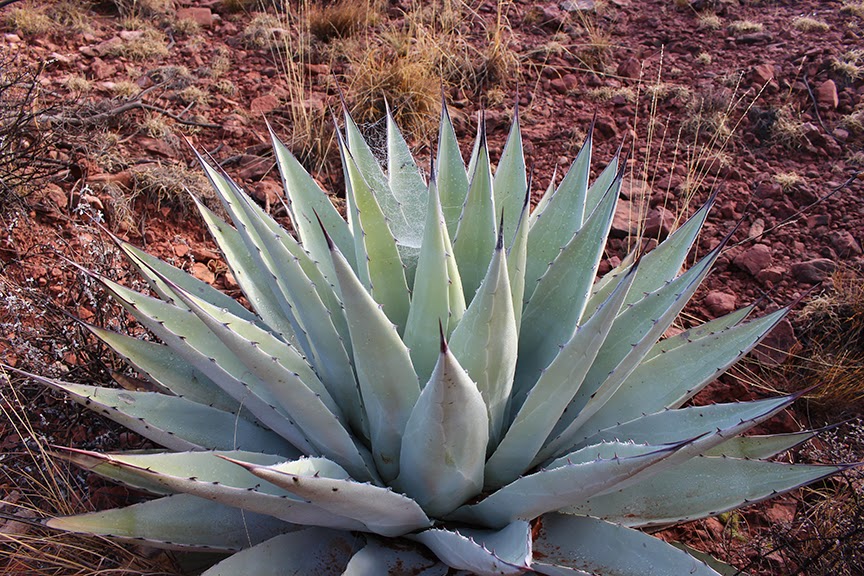 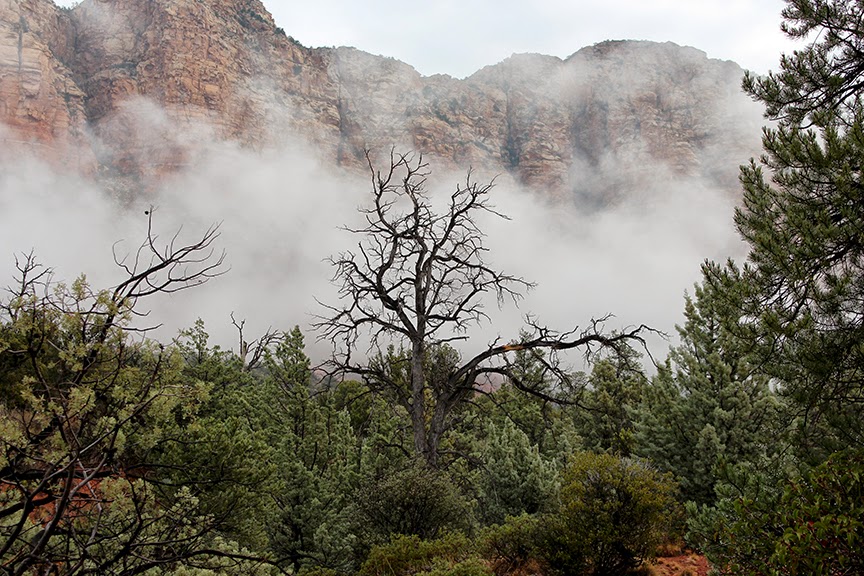 While we never did make it to Bell Rock in the morning, it was a walk that had me thinking about the nature of beauty.  Why do I feel compelled to snap countless pictures, the majority of which will be meaningless the moment we leave?  Why do I find myself drawn to the splash of colour offered up by a solitary brush, the angular intensity of the agave, or barren branches set off against the mist along the base of the mountain? 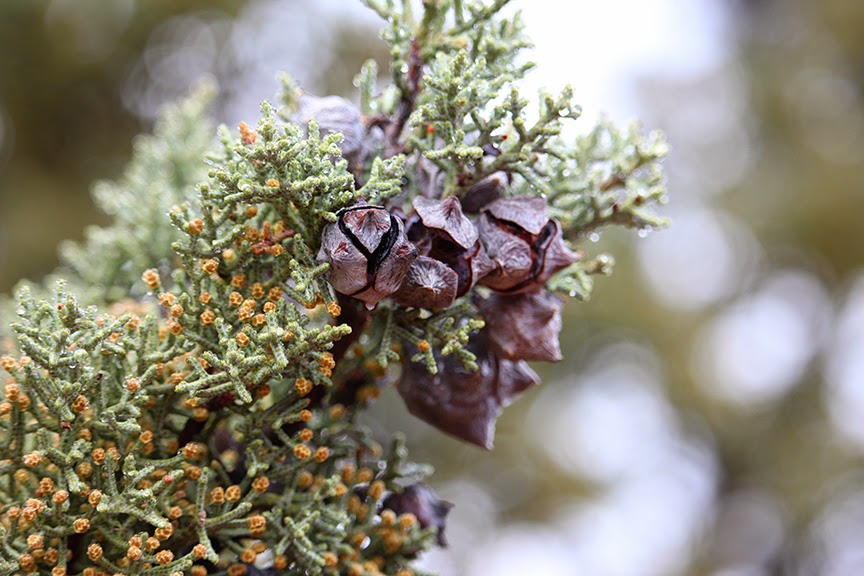 In many cases, I abruptly stopped in my tracks - you can ask Ben - and captured a moment of micro-brilliance. 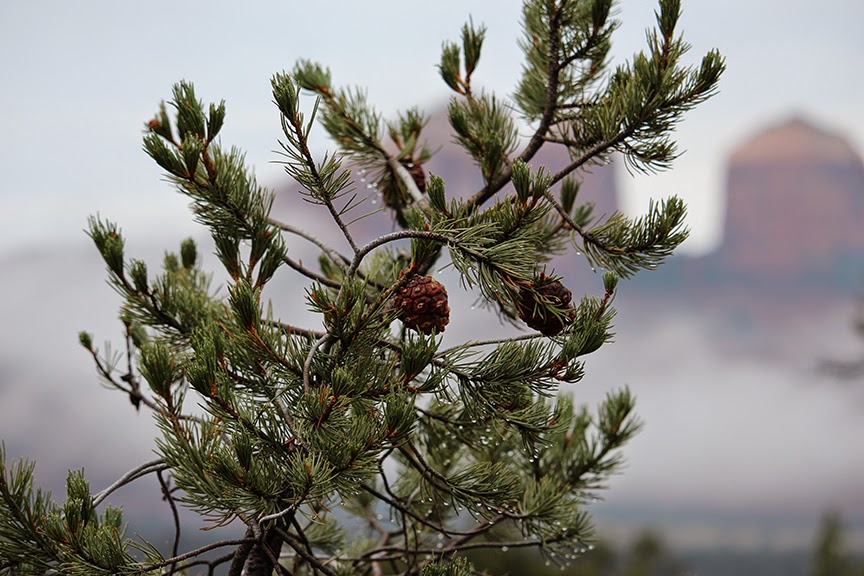 Ben became more excited as we started going up, hiking on trails that were a little more challenging.  However, we never did get to the climbing he had envisioned.  That would have to wait until the afternoon, now that I understood how I misread the maps. 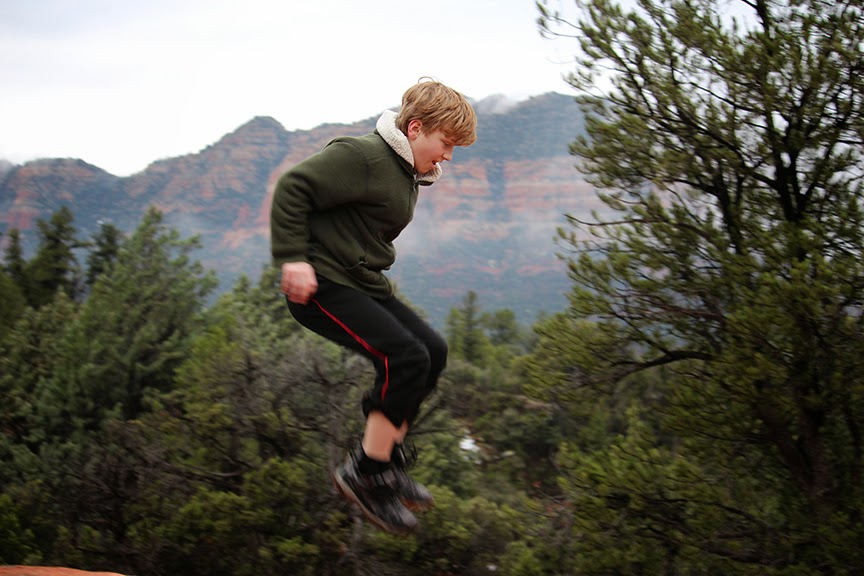 We walked, he jumped, we talked.  It was a great father-son morning, and one of the most serene nature hikes I have experienced.

"What should we do for lunch?" asked Ben.

"That's exactly what I was thinking."

We rendezvoused with Heather and Dylan at a quaint ice cream shop that also boasted the world's best hot dog. 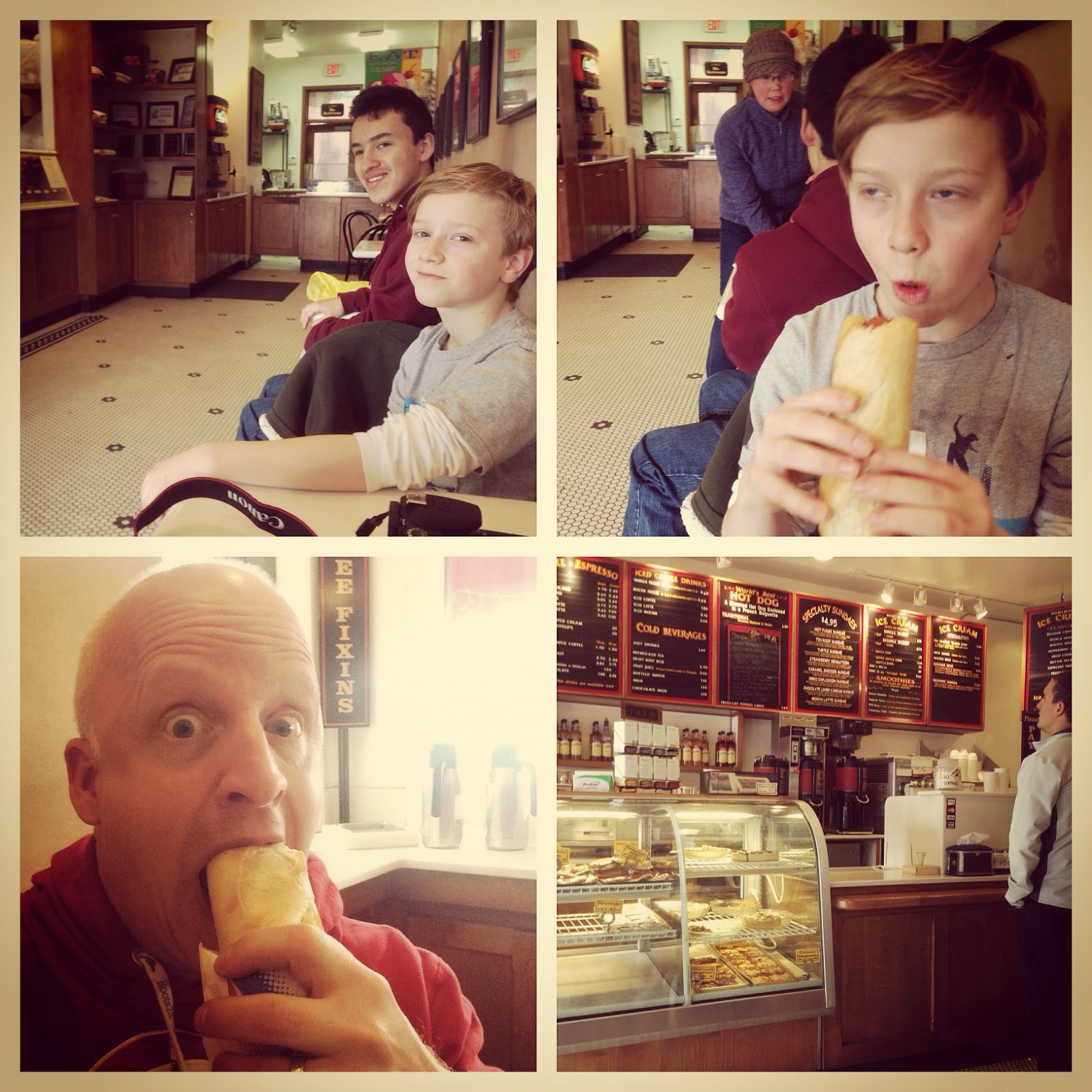 "What makes your hot dog so special?" I asked the young lady at the service counter.

"We use a special style baguette that we cut a hole in the middle for the hot dog to sit, along with all the condiments."

It was an interesting approach, that we all sampled hungrily, followed by a sampling of their desserts.

Heather had a spa treatment booked in the afternoon, which required me to drive her out to Oak Creek, just on the other side of Bell Rock.  This afforded me the opportunity to find the trailhead that Ben and I were actually intending to use for our morning hike.  So, after I dropped Heather off, I went back to pick up Ben so we could take advantage of the weather, which was still cooperating, and do some actual climbing. 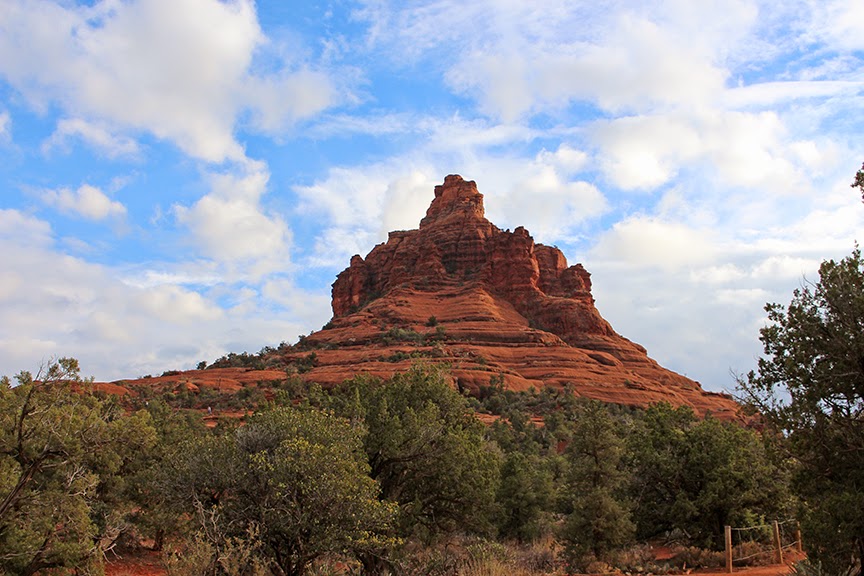 Bell Rock, named for its resemblance to the Liberty Bell, is 4,919 ft, and a relatively easy climb, as illustrated by the many young families exploring its lower reached. 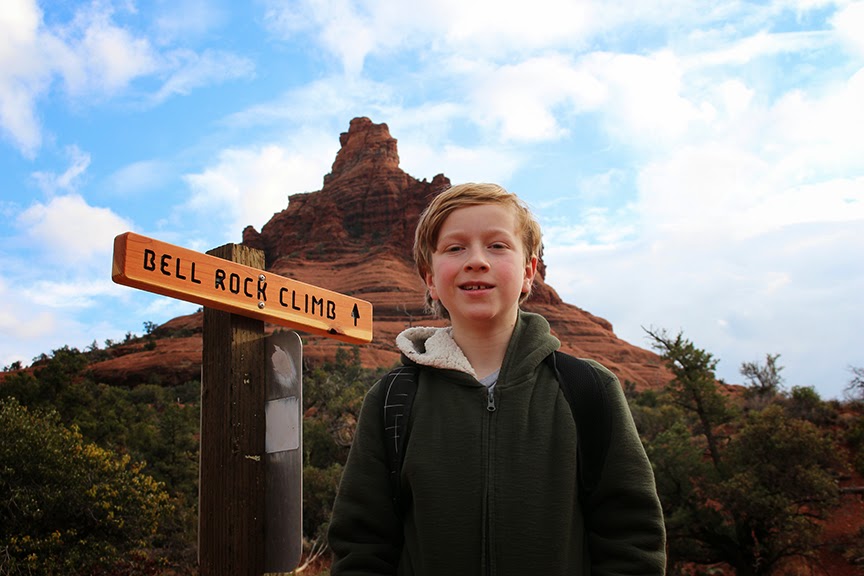 Getting up to the next level is a bit more challenging, and even more so as you approach the third and forth level, near the base of the jagged rocks that are more vertical, reserved for the advanced climbers. 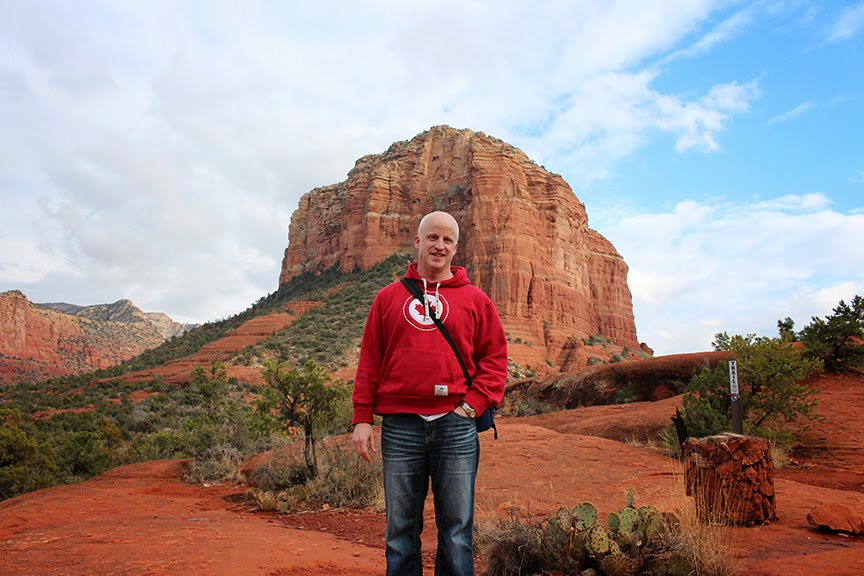 Concerned about time, the setting sun and the next incline that Ben wanted to take, I suggested we should turn around and begin the journey back down Bell Rock. 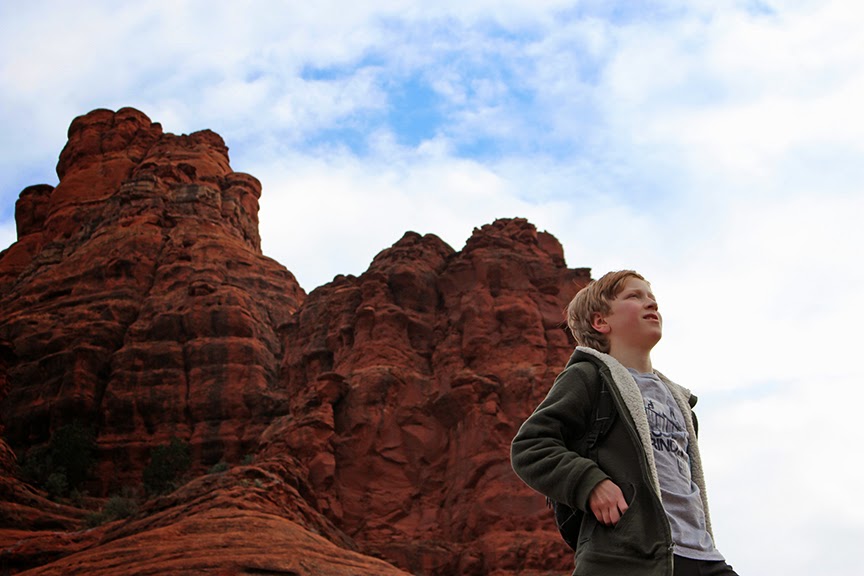 He was disappointed, but understand, and led the way off the mountain.

Dylan had dinner ready when we all got back, and we closed out the evening by playing a rousing game of canasta.  It was a tasty end to a delicious day. My body was a little sore after three vigorous hikes, but content in the memories of some amazing views, and breathless moments of beauty.
Email Post