We had a choice at the start of our guided tour with Jesse Kalu: we could take our rental vehicle and go to a variety of viewpoints and do some potentially difficult hikes for Dylan, or we could take his Jeep and drive to the great spots.  We quickly chose the second option and squeezed in a vehicle designed for some serious off-roading.

Jesse, originally from Micronesia, has been a resident of Sedona since 1991.  In those early days, he camped out in the hills, eventually moving into town doing a variety of jobs.  He now makes a living making music with his traditional native American flutes and selling CDs and a variety of handcrafted goods. 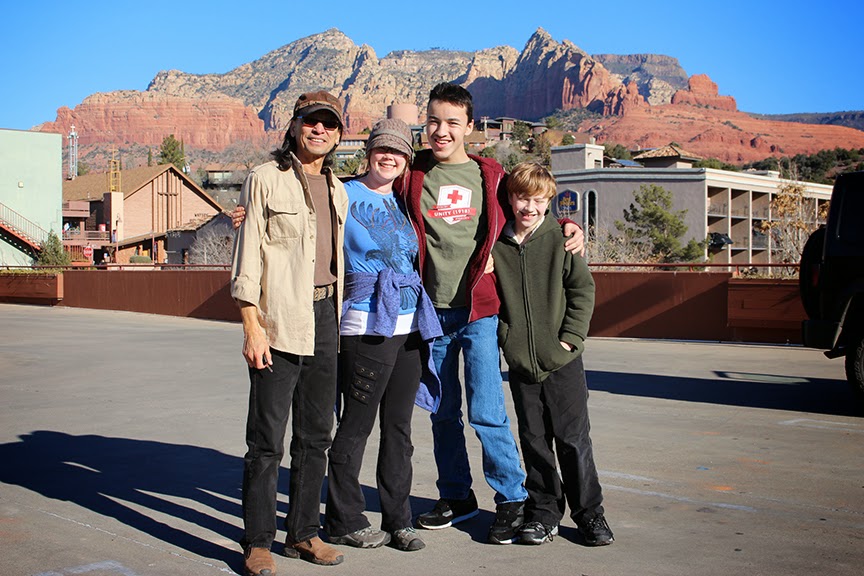 He took us up into the hills to the beginning of a trailhead.

"Those folks who can't make it over this," he said, indicating the significant bump in the path just ahead of us, "will be walking from here."  Without any effort, the Jeep traversed the obstruction and we made our way up to a sink hole and eventually, submarine rock. 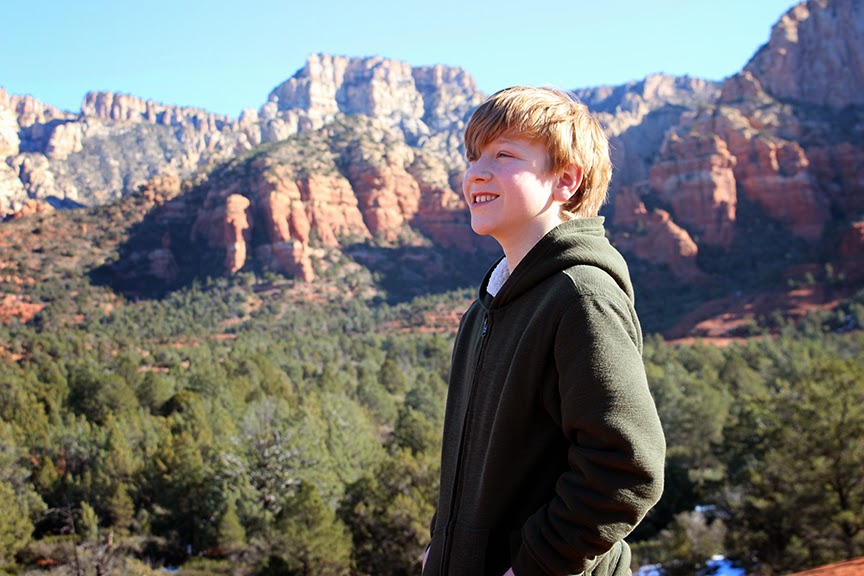 Resembling - possibly informing - the Nautilus, the submarine vessel from 20,000 Leagues Under the Sea, this marvellous formation provides a stunning view, especially to the west, resplendent in the morning light. 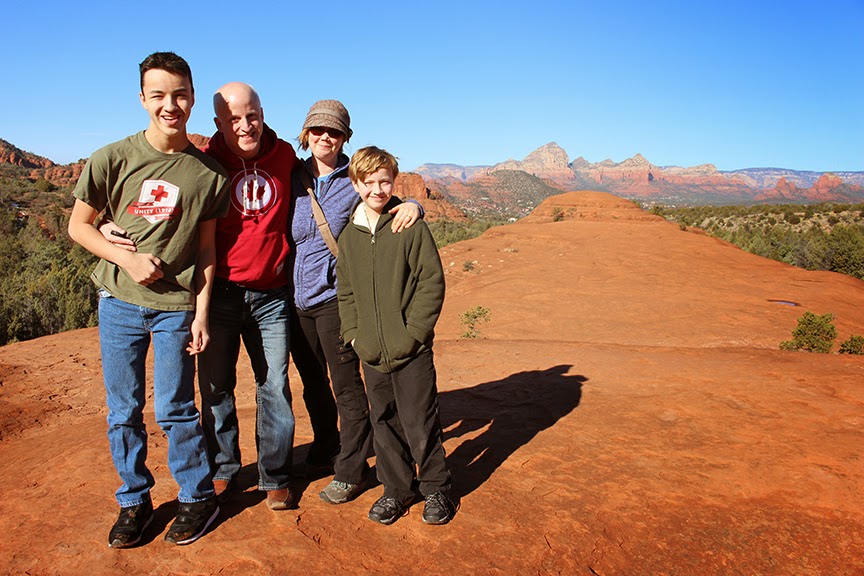 It would be great to return to this spot in the mid-afternoon, when the rocks to the east catch the sun as it makes its way to the western horizon.

Jesse shared with us the Walt Disney used to spend lots of time here, observing, and being inspired by, the fascinating rock formations.  I can see why.  They each suggest a story and contain a character, sometimes several.  What the locals call Coffee Pot Rock, the Native Americans call Standing Eagle; I prefer the latter. 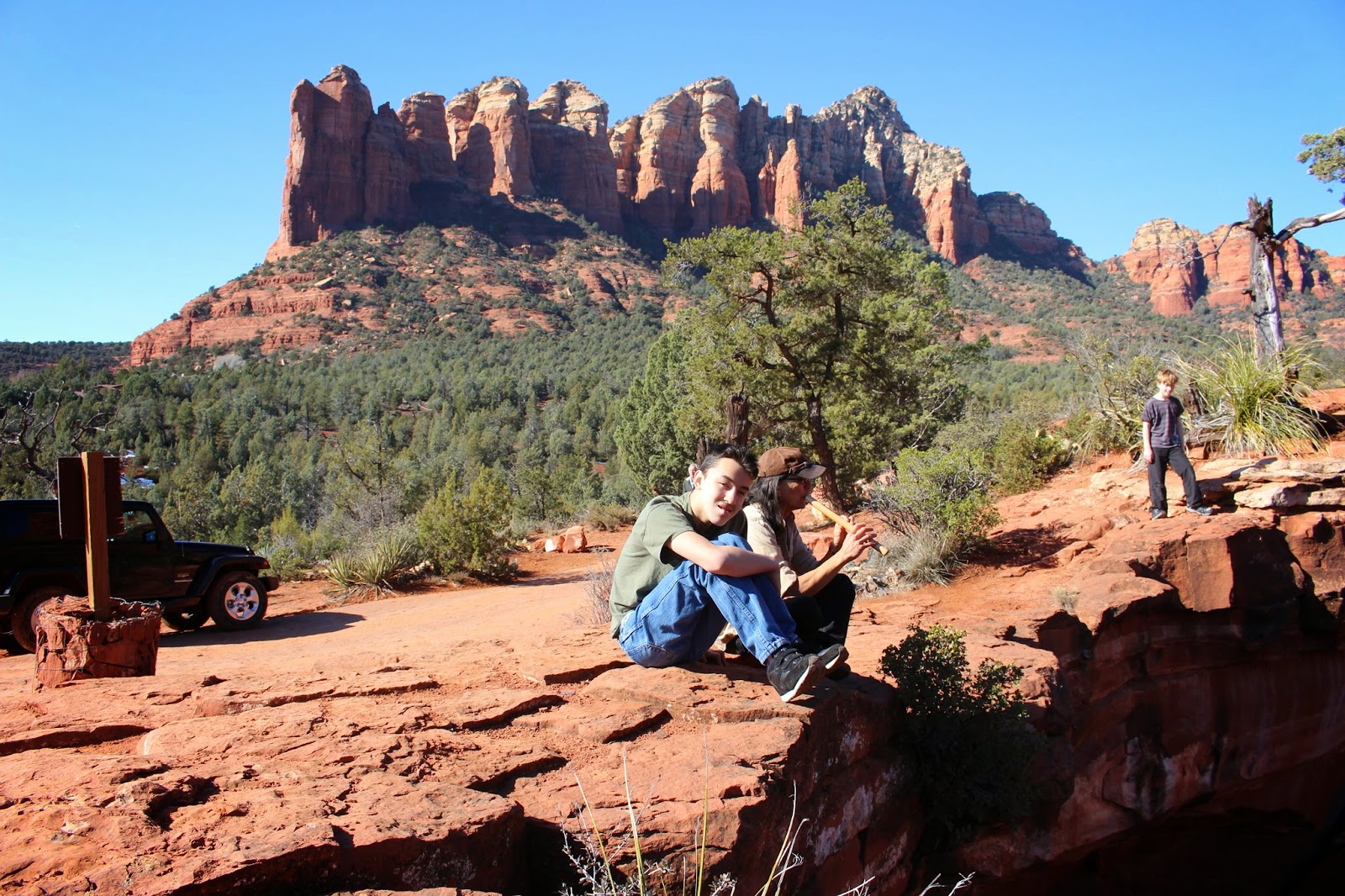 We made our way to an even larger sink hole on the north side of Sedona, also the location of the seven sacred pools.  I got a little unsteady as Dylan hung out on the edge of the massive sink hole with Jesse as he played his flute.  As he struggles with his balance on uneven surfaces, my stomach was in my throat as he meandered within a dozen inches of this precipice.  Heather was feeling a similar sensation. 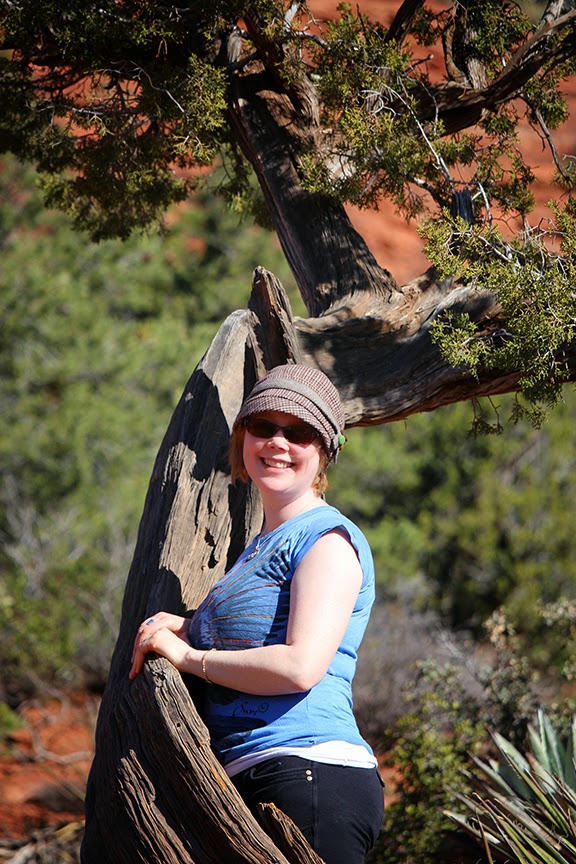 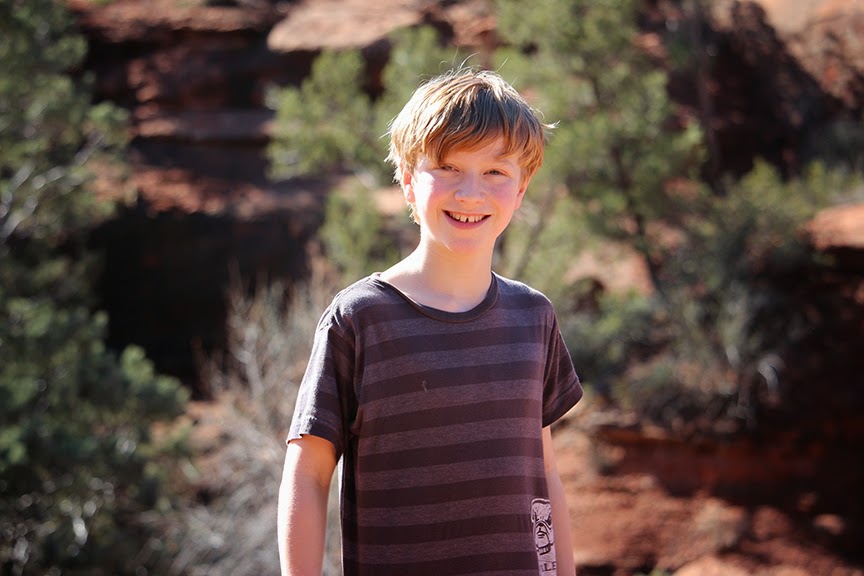 This segment of the drive was even more bumpy than the first one.  I was holding on to a grip bar with one hand while cradling my camera with the other. Heather was in the back with Dylan and Ben, trying not to bump heads.  It was an unforgettable trip. 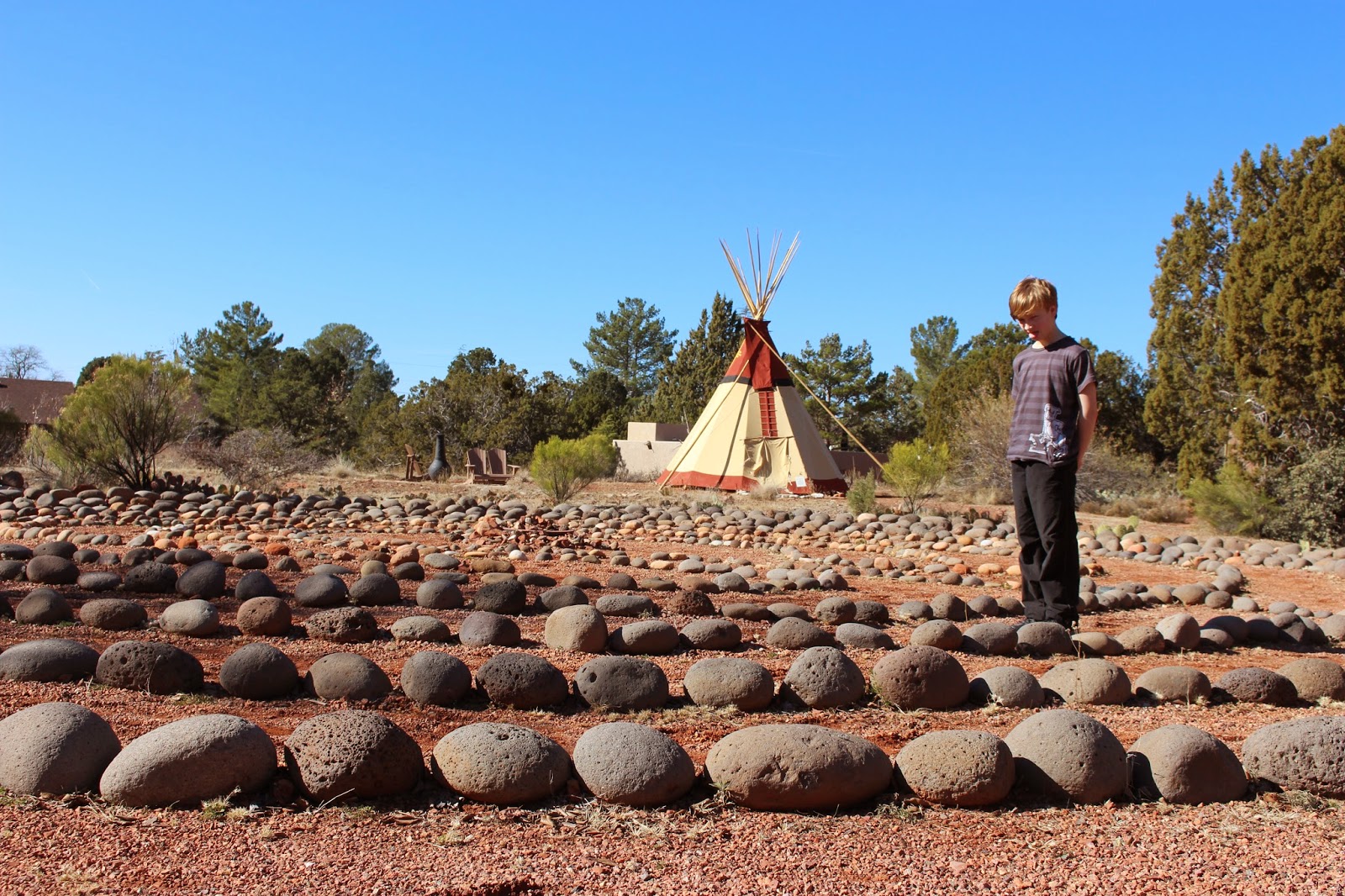 To close out our guided tour, Jesse took us to a labyrinth and medicine wheel located on a healing retreat.  It was a fitting end to a glorious day of discovery, a chance to reflect in a sacred space.  Dylan took the opportunity to spend some reflection moments in the teepee located on the grounds.  Ben joined Heather and Jesse in the centre of the labyrinth, making some rock sculptures.  I snapped pictures. 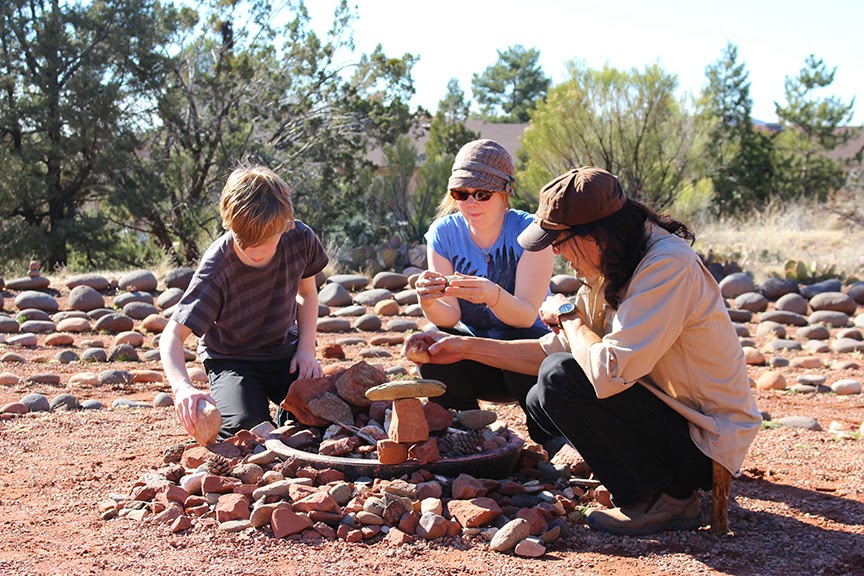 Uptown Sedona, where our rental condo is located, feels similar to Banff, Jasper and other tourist-centric places.  It is low season right now, and shop keepers were poking their noses out, hoping that some of the sparse walking traffic would come in. 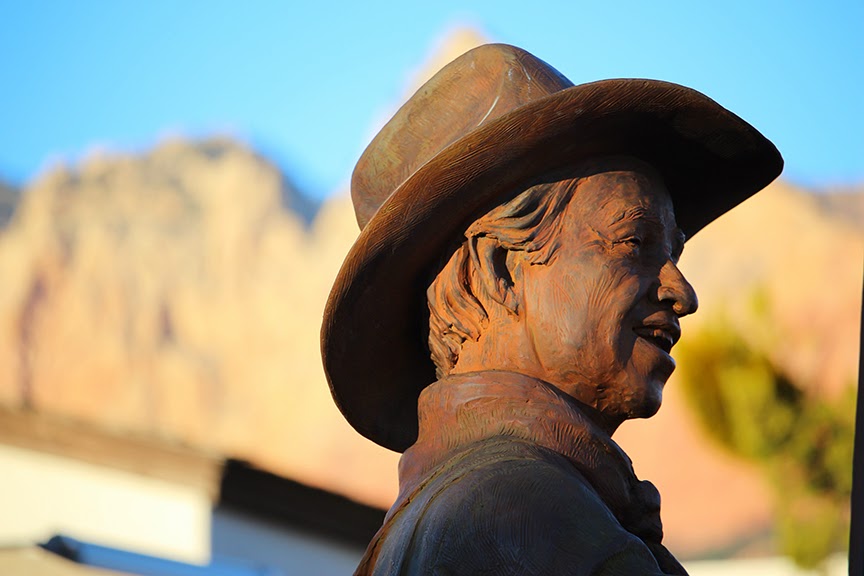 There are lots of sculptures along this three block stretch, including one of Joe Beeler, the cowboy artist who was Jesse's landlord for a time before he died in 2006.  There are also several painted Javelinas, a pig-like creature that co-exists with the humans in this beautiful place. 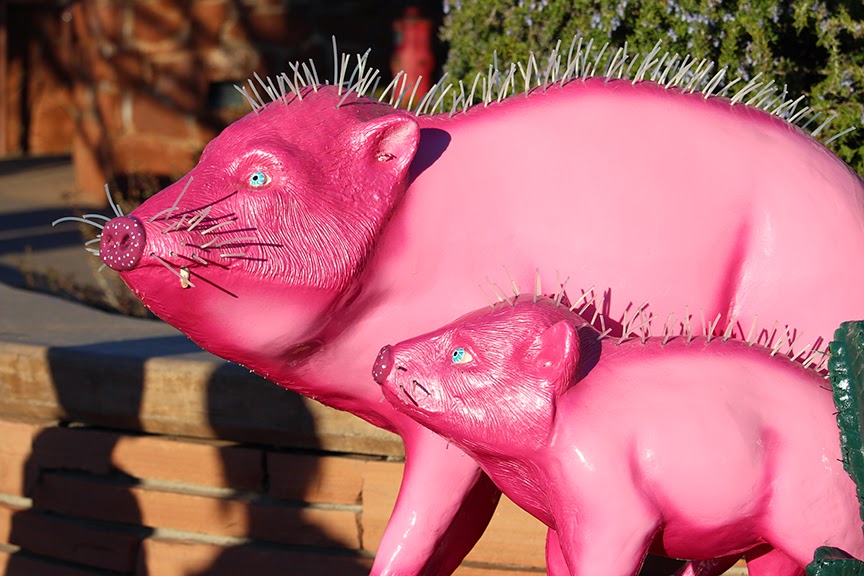 But my favourite amenity in Uptown Sedona was four sets of xylophones and tubular bells made out of recycled materials. 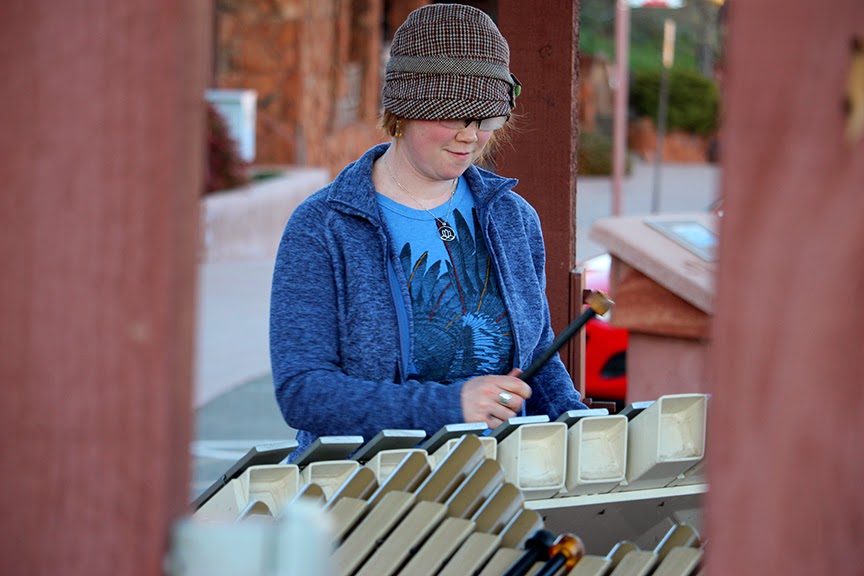 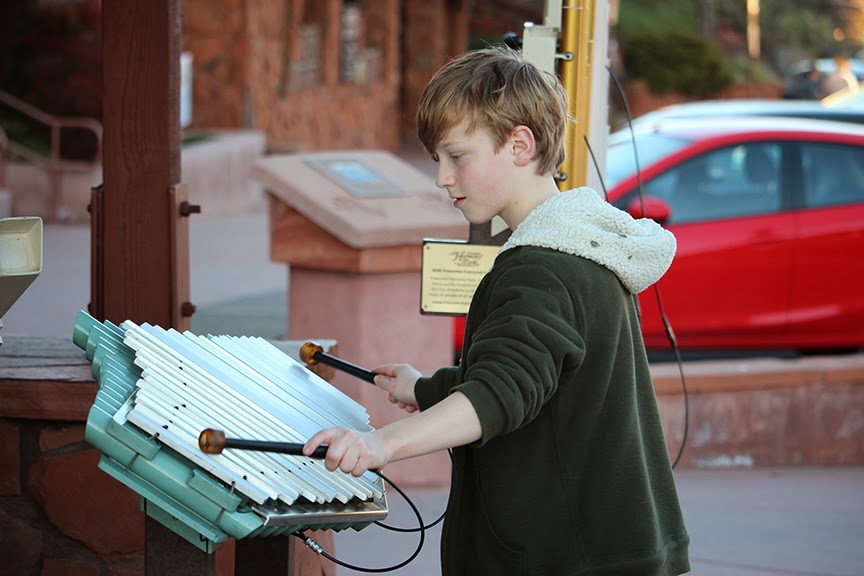 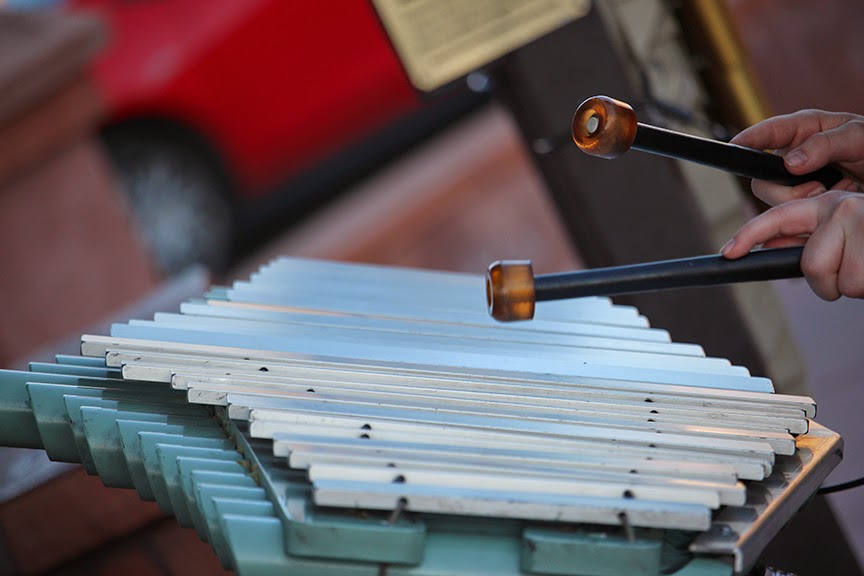 We enjoyed making music together as the shops began shuttering up for the day.  The streets roll up at 5 pm on the nose, at least during this tourism slow spell. 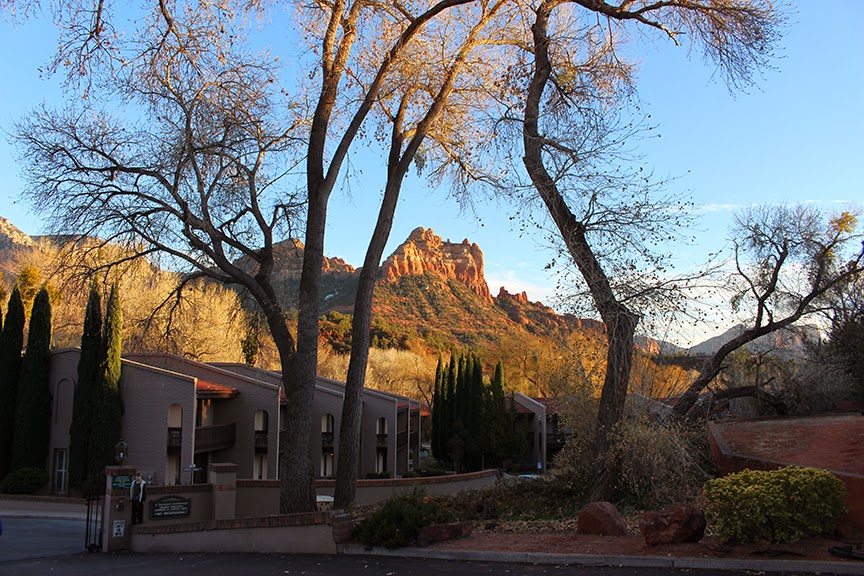 The quality of the light on the red rocks as the sun begins to set is so beautiful.  It doesn't last long, as we're in a part of the world where going from day to night seems to happen in a snap.  As we set out after a light dinner of a tossed together salad - we had all had too much for lunch at the place that Jesse took us to - the night sky was alive with stars.

The amount of light pollution in Sedona is so much less than what we're used to.  Street lights are minimal, and the planners have thoughtfully designed a place that is equally mystical when the sun goes down.

We ended the day with a free concert at the Wyndham Resort with our fearless guide Jesse.  He did a 30-minute performance with a variety of his handmade Sedona bamboo flutes that was transcendental.  He interspersed soothing music with mimicked animal and bird sounds using his various flutes, all pitched slightly different and all in different lengths and shapes.

It must have been something special, I thought to myself; I didn't think about tweeting or snapping a picture, not even once.  I was transfixed.

"Tomorrow is your day to go to the Canyon," said Jesse as we were leaving.  "It's going to rain on the weekend."  We had been seeking his counsel earlier in the day for the best way to get to, and experience, the Grand Canyon, which is a two-hour drive from Sedona.

Looking at the forecast this morning, Jesse was bang on.  This is our last sunny day, and based on reports from a Canadian couple from Barrie, ON, it's cold, windy and wet up there - the Grand Canyon views sit at over 7,000 feet, so having some sunshine when we visit is going to be essential.
Email Post