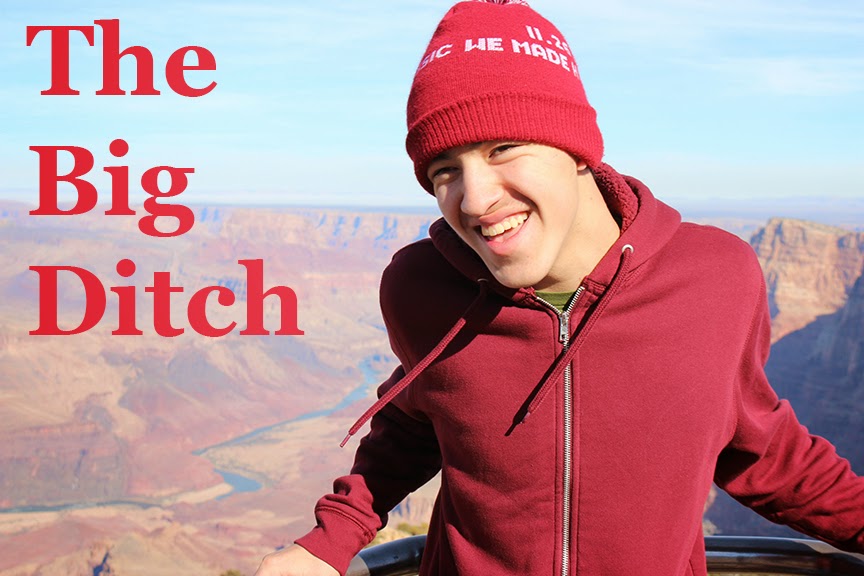 Yesterday was our trip to the Grand Canyon, one of the seven natural wonders of the world, or, as I like to call it, the world's biggest ditch.  We decided to bump it up a few days based on the weather forecast, as it was calling for a good chance of precipitation through the weekend and into Monday.  Seeing the Grand Canyon was going to be a whole lot better if the visibility was good.

Our rental condo is on the very edge of Uptown Sedona, so all we had to do was get on the main drag and head north out of town.  The route between Sedona and Flagstaff is spectacular: winding, twisting, and elevating. Starting at 4,500 feet, we slowly made our way up to over 7,000 feet carefully driving a stretch of 46 miles.  There are a few housing pockets, retreats and cabins scattered along 89 A, as it cuts through Oak Creek Canyon.  I often felt like I was in a video game, slowing down to make hairpin turns, and speeding up as we hit the straightaway.

Approaching Flagstaff, the terrain changed dramatically, as we began to experience the ponderosa pine forest and see Mount Elden and the San Francisco peaks, the highest mountain range in Arizona. Humphreys Peak, about 10 miles north of the community is 12,633 feet.  We drove to the right of the range on Highway 89, making our way to the Grand Canyon turn and the location of the "painted desert".

The highway was straight as an arrow as we came over the crest of the hill, leaving the suburbs of Flagstaff behind.  The speed limit was 75 mph, but even that didn't seem fast enough for the straightness of the road, and the lack of vehicles it contained.  With the admonition of the car rental guy in my head of "no citations", I kept following the speed limit, despite how awkward it felt.

We turned at Highway 64, as the terrain changed yet again.  We were now on a high mountain plateau with not a lot of vegetation and lots of rocks.  The Native Americans have market stalls constructed all along this route, but as we arrived in the low season, there is almost none in operation.  Jesse had suggested stopping at one with a gazebo-like structure for some bison or elk jerky, but even it was closed.  We were heading to one of the most visited natural wonders in America, and we were one of only a few vehicles on the road.

The canyon began to open up along this stretch.  Off in the distance, maybe two or three miles, we saw a deep crevice.  At one point, it cut very close to the highway, which proved to be a wonderful teaser for what we were about to see. 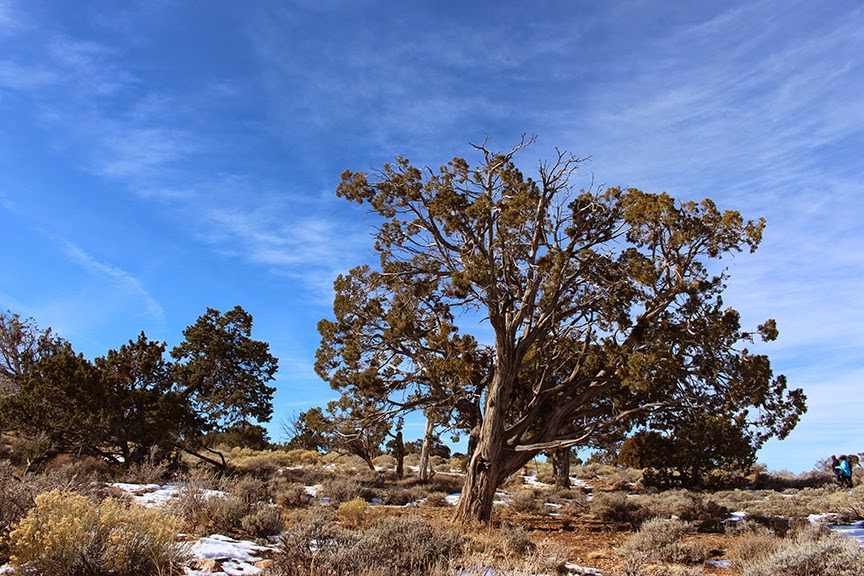 Our first stop was at the Desert View Watchtower.  This 70-foot, 4-story structure, was built in 1932, designed by a lady named Mary Colter, an employee of the Fred Harvey Company that built many of the buildings in the Grand Canyon area.  Mr. Harvey will factor into this story a little later, when we get to the main village. 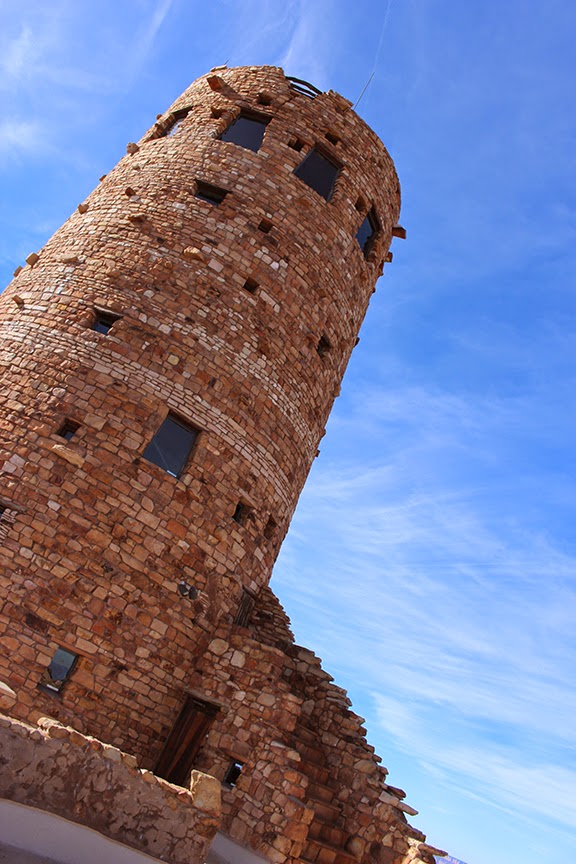 Designed and built in the pueblo style, the Watchtower looks and feels like it was built centuries ago, and provides stunning views of the grand expanse of the canyon.  Unlike the more famous skywalk, which is terribly expensive - according to some fellow Canucks we talked to the night before, the tower didn't cost us a cent, yet it gave us a wonderful experience. 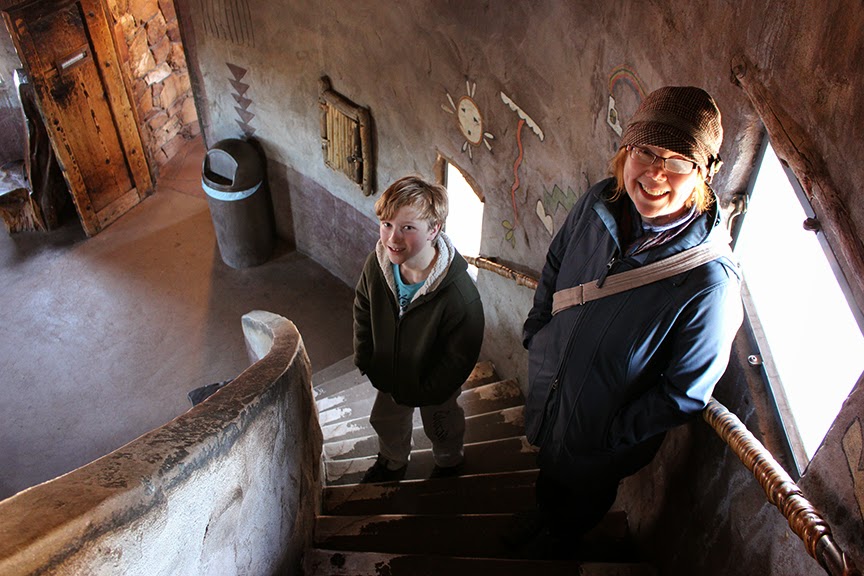 I can imagine that during high season, the narrow winding stairs to the top would be a traffic nightmare, but being there in January proved to be perfect. 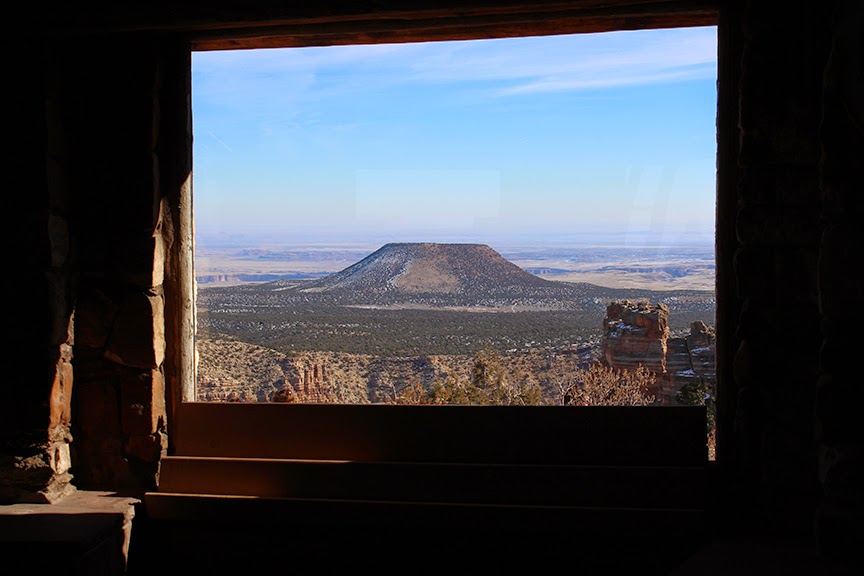 I was particularly taken the the flat top hill off to the east in the painted desert.  I later discovered that it is called Cedar Mountain.  My eyes kept returning to it, admiring its beautiful symmetry and form. 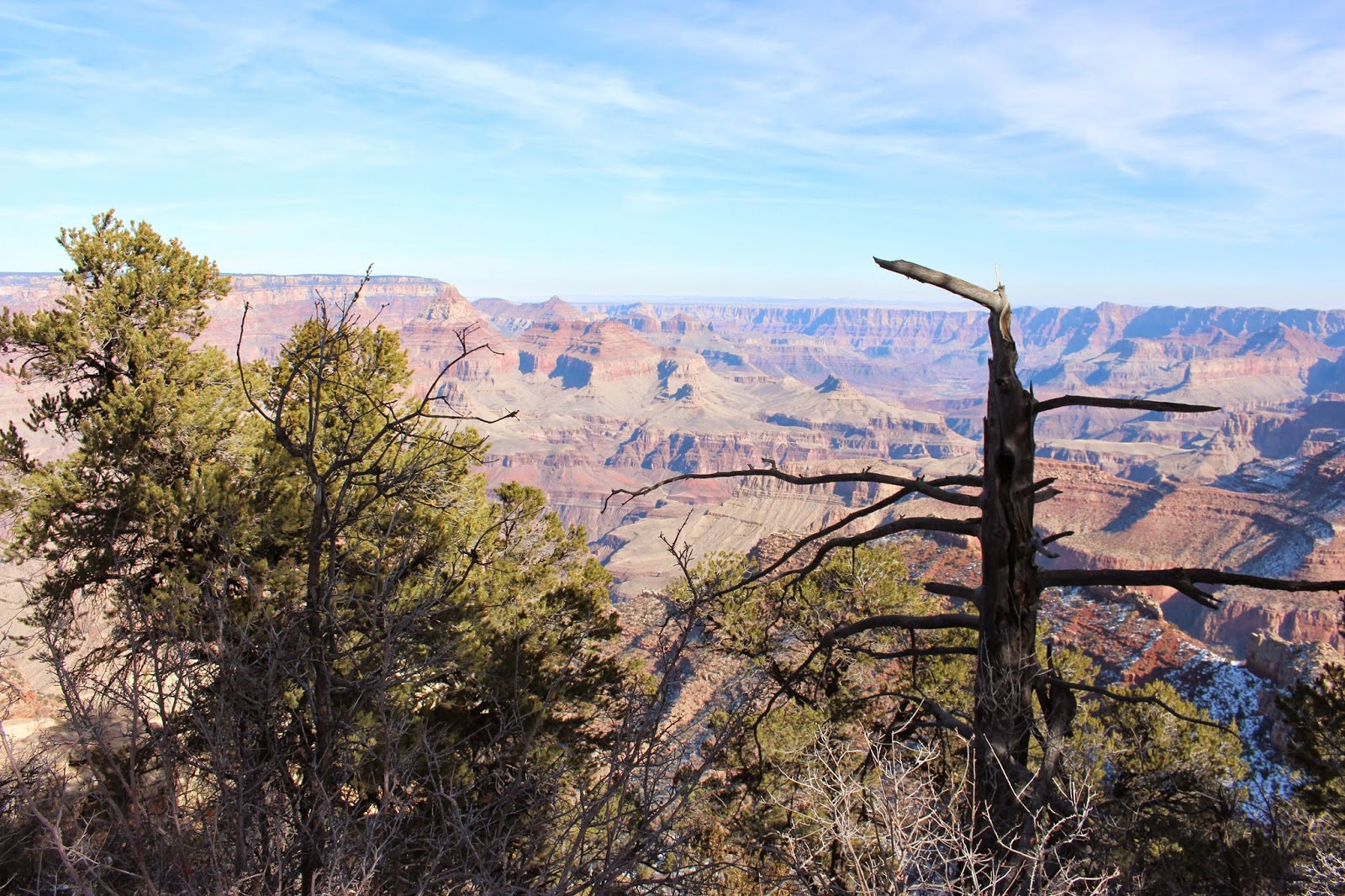 From the tower, we continued driving along the south rim until we got to the grand view location.  This is the spot where, if the path was not so icy, we could have made our way into the canyon.  Jesse had warned us that for every 10 minutes of descent, we had to plan 20 minutes to come back up.  In the end, we didn't try it at all.  It was enough to soak in the views. 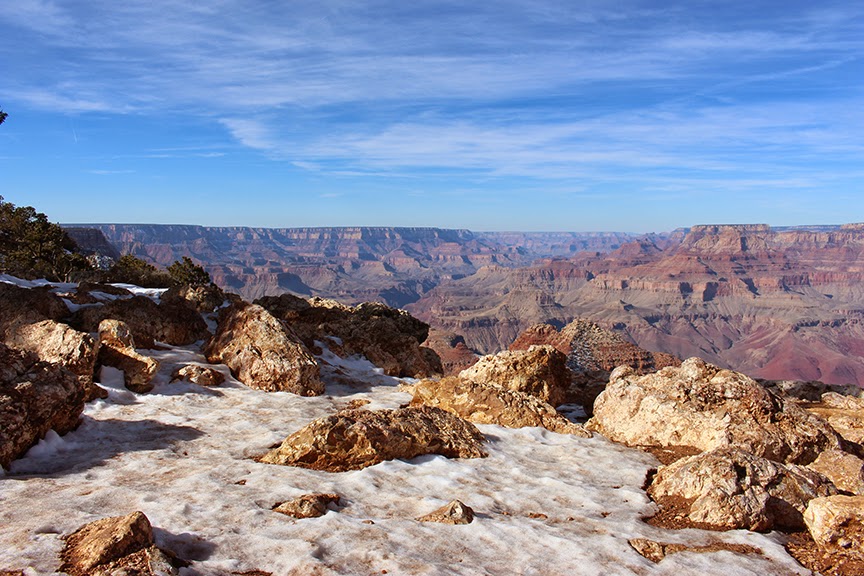 Jesse had recommended that we try the El Tovar Hotel for lunch.  Unfortunately, its dining room was in the middle of a reservation.

"Go down this hallway and out the door to your left," said the kind lady at the reception desk.  "You'll be able to eat in the Arizona Room, just a five minute walk away." 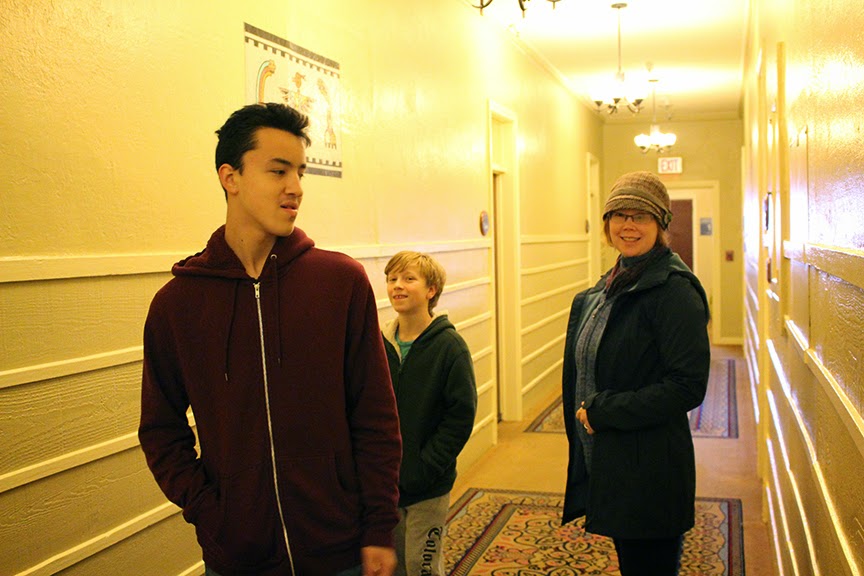 A rustic hotel, built by Fred Harvey almost a hundred years ago, I couldn't resist snapping a picture of Heather and the boys.  The light and the lines were very interesting.

"You know when you snapped that picture in the hallway," said Heather.  "I didn't like the feeling."

"Of getting your picture taken?"

"No," she said.  "I was picking up some energy that didn't make me feel comfortable."

Heather has an ability to pick up ghostly vibes, and her senses were tingling.  It turns out, after doing some online research, that the ghost of Mr. Harvey apparently still inhabits the hotel.  He makes an appearance every Christmas and gregariously invites his guests to his holiday party. 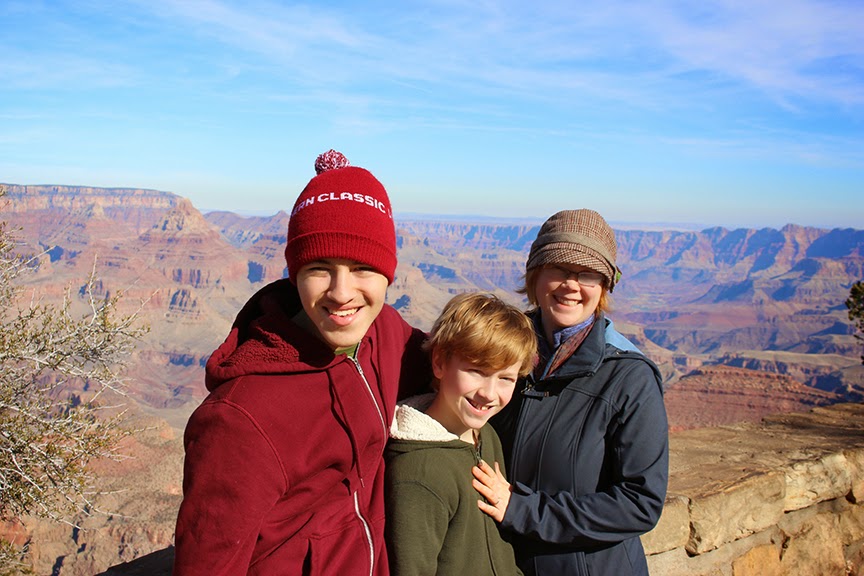 We enjoyed a lovely meal overlooking the Grand Canyon, then a nice walk back to the car before our long drive back to Sedona.  It was a lovely day, and the weather was absolutely perfect.  We can now cross this particular natural wonder off our bucket list. 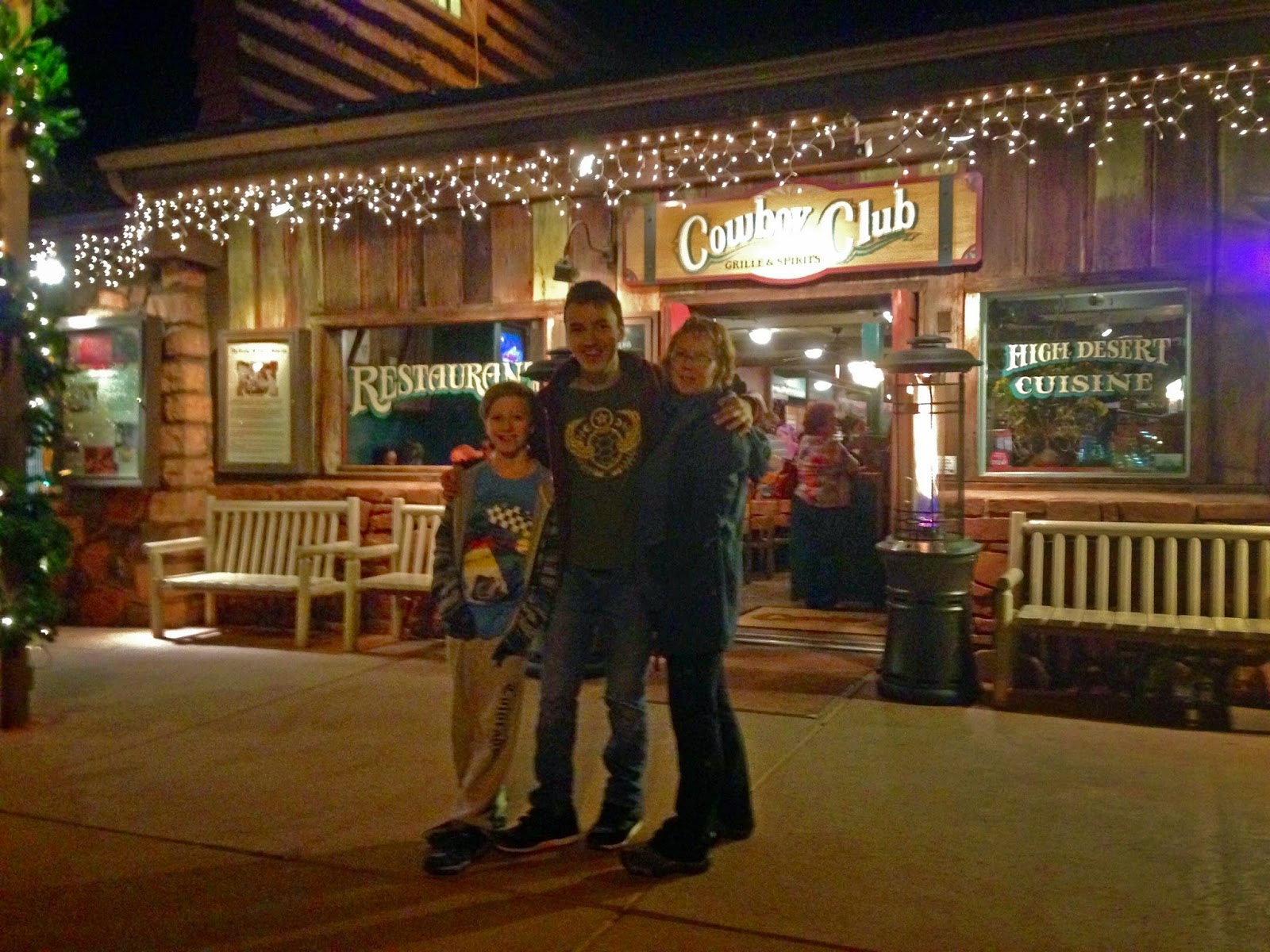 In the evening, we enjoyed a marvellous meal at the Cowboy Club, formerly the Tavern, where many of the movie stars would eat after a long day of filming.  Sedona proved to be a popular spots for many of the western movies that were made in the 1940s and 50s.  It felt pretty cool being in a space that had hosted legends like James Stewart, John Wayne, Burt Lancaster and many others. 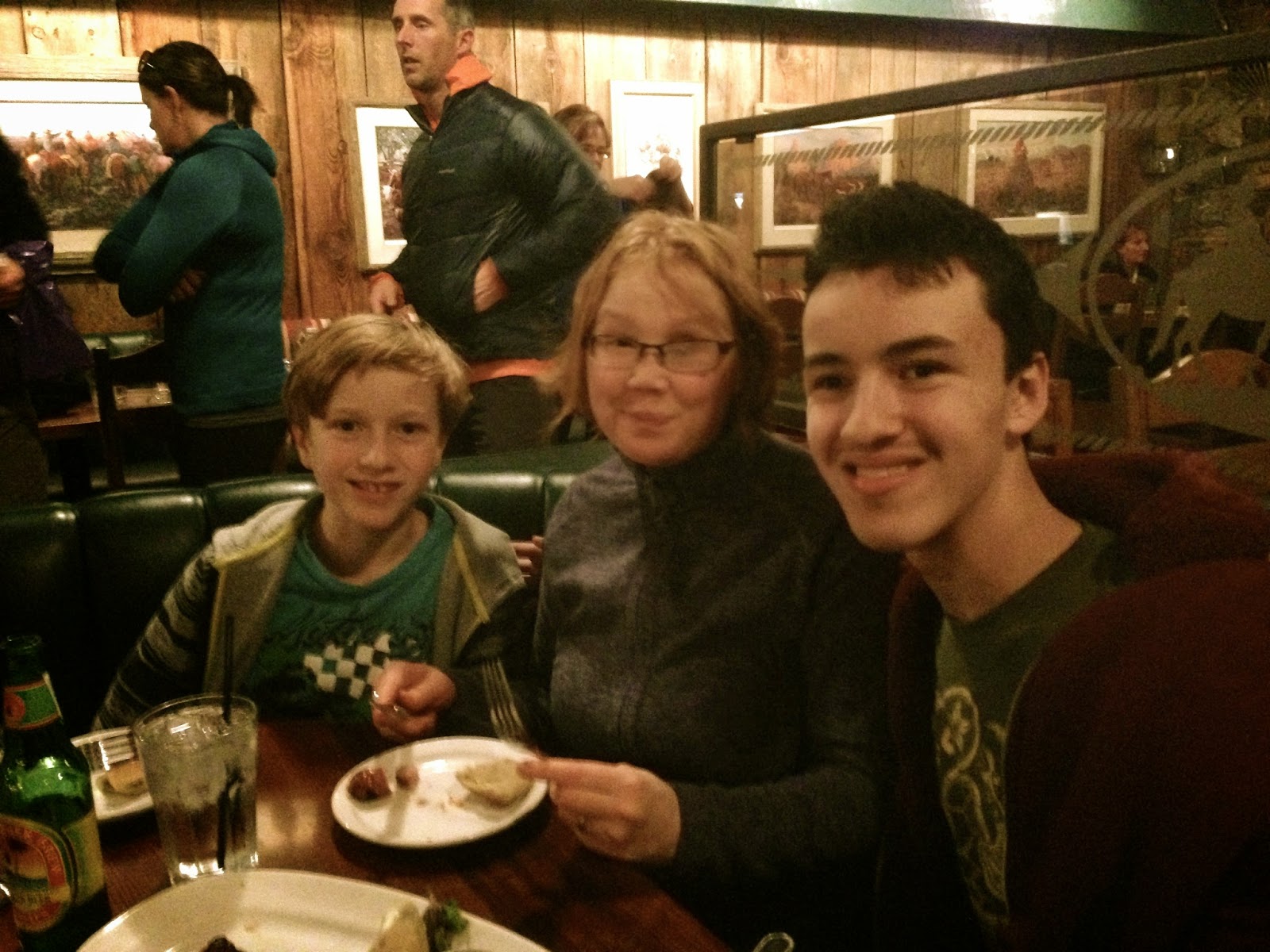 We had rattlesnake and cactus fries for the first time.  Both were excellent.  To say that we've been eating well would be a gross understatement.  I'm eagerly awaiting our return to Fort McMurray so I can go back on my Ideal Protein program and shed some of these pounds I've gained over the holidays and on this trip.  For the moment, I chose not to worry about my re-emerging bulge and enjoy the sweet indulgences that Sedona is providing.