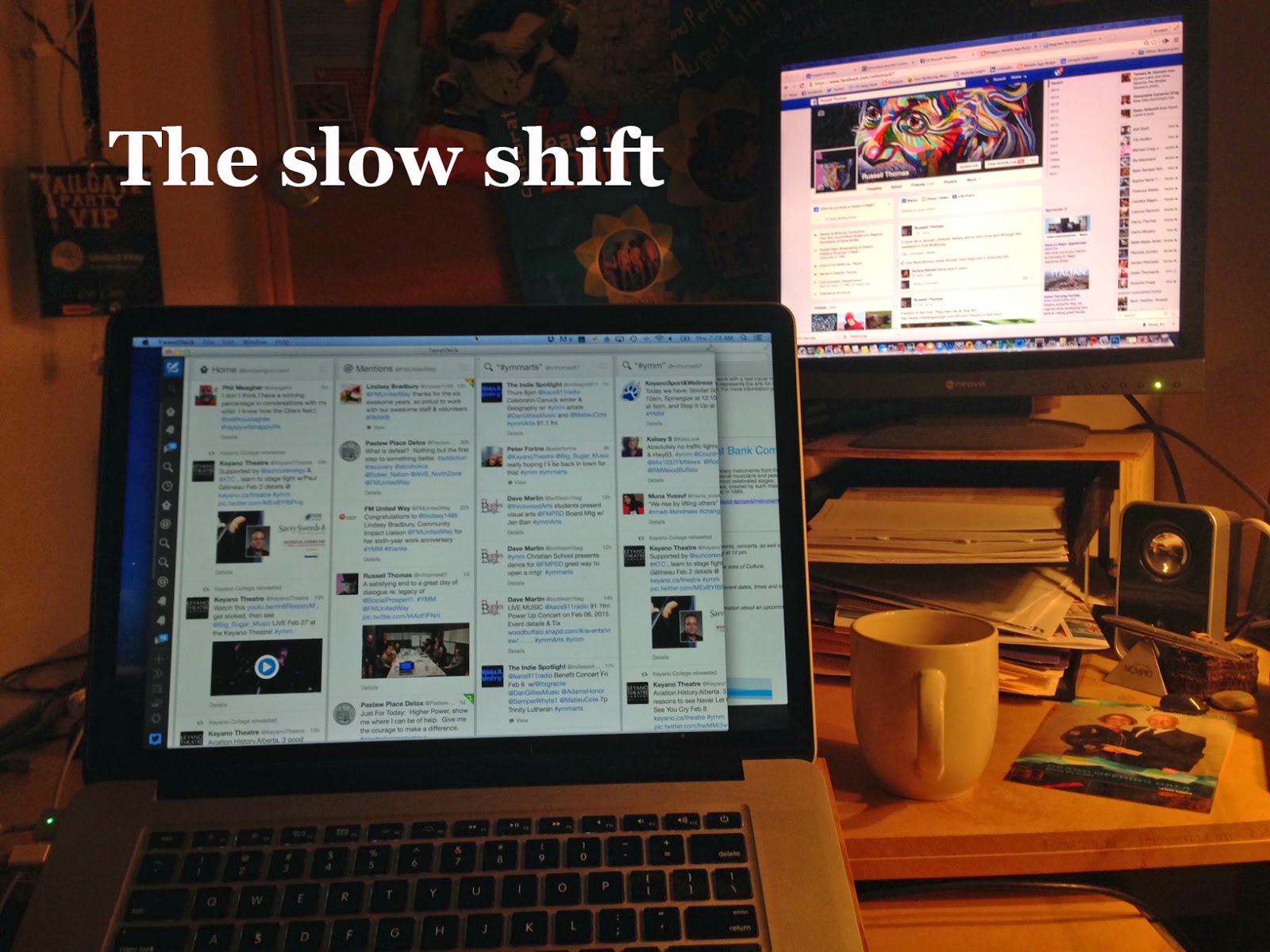 One of the things that I do through Birdsong Connections is monitor and manage the social media presence of a number of different organizations.  Sitting at my computer, with an additional screen to widen my view, I am able to scan various information sources to get a sense of the many things that are going on in our region.

All of these journalists who have swooped in trying to get the "Fort McMurray is sinking" story have likely felt a little befuddled by the level of positive activity happening.  In the last two days, I've been interviewed by someone from Bloomberg News and the Globe and Mail.  They were pursuing two different stories, but it is clear that with the falling oil price, there is a presumption that panic is overtaking our community.  The Fort McMurray International Airport surpassing Regina in terms of passenger volume, The United Way of Fort McMurray meeting and exceeding its campaign target of $8 million, and the region coming together to produce the best Western Canada Summer Games ever - examples of counter-intuitive responses are everywhere.  I sincerely doubt that any of my anecdotes make the final cut, though I hope I'm wrong.

As I observed all the positive things happening in our small piece of the world - arts, education, social profit, sports, politics - it struck me how much I rely on the screens in my life to populate my brain with information.  There is so much going on in Fort McMurray and Wood Buffalo, that I don't know how I could keep up if I didn't have my web browser open on one screen, and email and Tweetdeck on the other.  If I couldn't scan my iPhone when I'm walking from meeting to meeting, I don't know how I could possibly keep up.

Being on Facebook and Twitter has slowly gone from being novelty to necessity.  The two vehicles, primarily, have become our two essential lifelines to the world around us. Think about how you use them  personally and professionally.  Think about where you go when you want information.

When I was young - such a long time ago - we had the local newspaper (The Kamsack Times), the radio station from Yorkton (GX-94), and the library.  That was our world.

When I left home and began my working life, my thirst for information grew.  So, I allowed myself to get suckered in by the traveling encyclopedia salesman.  I'm embarrassed about it now, but at the time, I felt like I had the world at my fingertips with all the information I needed to help me be worldly and successful.

In the early years of my radio broadcasting career, information came to us on a teletype.  Someone at the Associated Press (I think that was our news service) was typing on a machine, presumably in Toronto, Montreal or another big city, and those words were printed out on a large roll of newsprint on our end.  We would "rip and read" for our news, sports and weather casts and show prep.  As that career came to an end, the Internet was growing at an exponential rate.

My head goes to the night that Lady Diana died.  We were watching the news, of course, but we were also watching the early iterations of online news.  Somewhere in my box of  memories, I have a colour print out of the main story that appeared on CNN that night, thinking that I needed to preserve that moment.  I was reading breaking news on my computer screen.  How incredible was that?

The arrival of social media signalled another shift in terms of information, as power began to transition from publishers, media conglomerates and news outlets to people.  A full decade later and we have all become, at one level or another, a media channel.  Each of us has a network - is some cases, multiple networks - and we share information.

These changes have happened slowly and surely, but they are now pervasive.  Yes, there are still people who chose the morning television shows, newspapers and radio stations to stay in touch.  But, by and large, we rely on myriad websites, social media networks, email, texting and tweeting to make sense of the world.