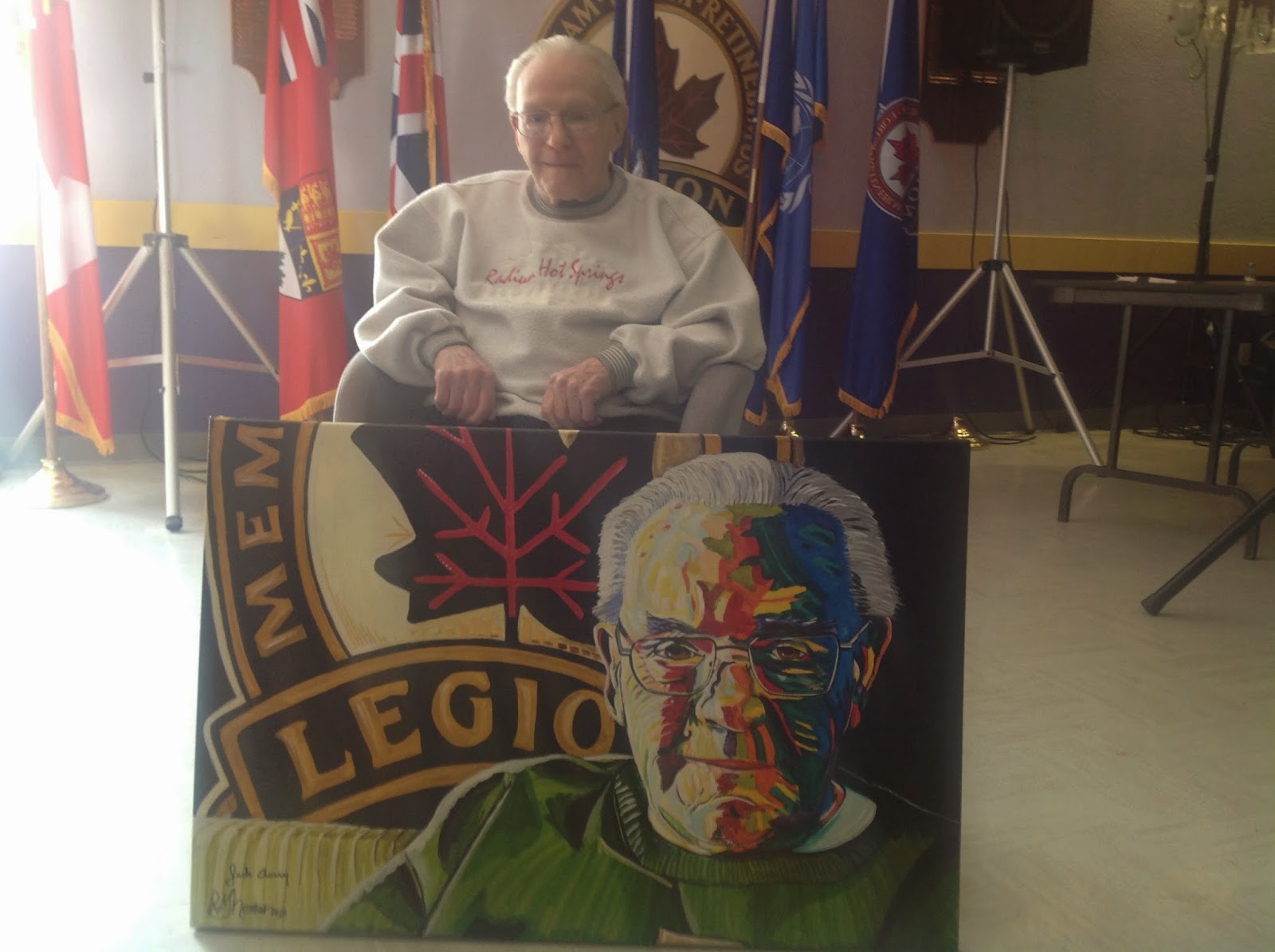 I am so grateful for what I get to do as an artist, and much of that came into focus over the last few days.  On Friday, I was able to deliver the portrait of Jack Avery to the Royal Canadian Legion.  He saw and signed it later that day.  Apparently he was quite taken by it, and happy to have added his signature to the piece. 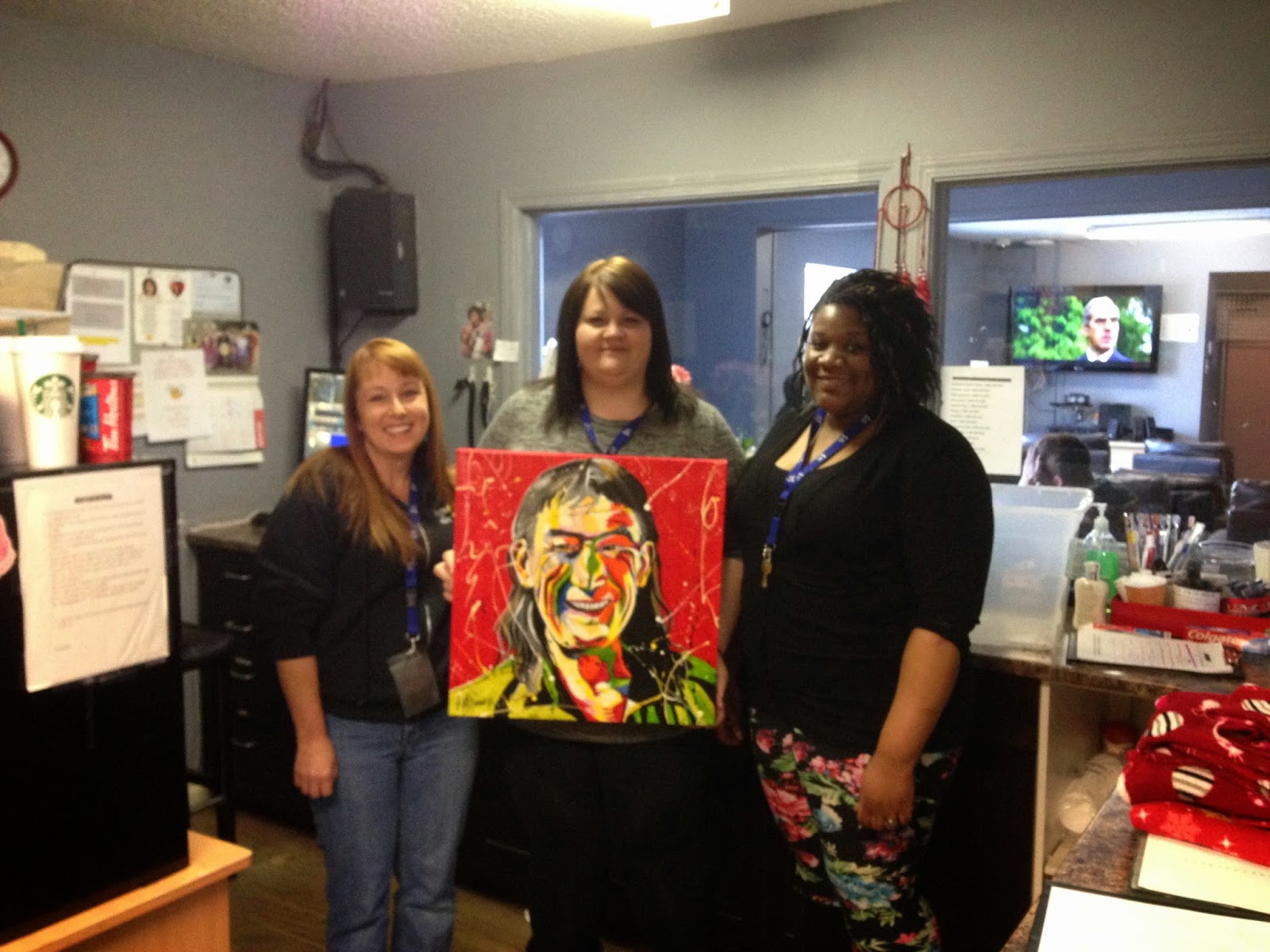 On Saturday morning, I brought the portrait of David Cardinal to The Centre of Hope where it will live as a reminder of a remarkable fellow. 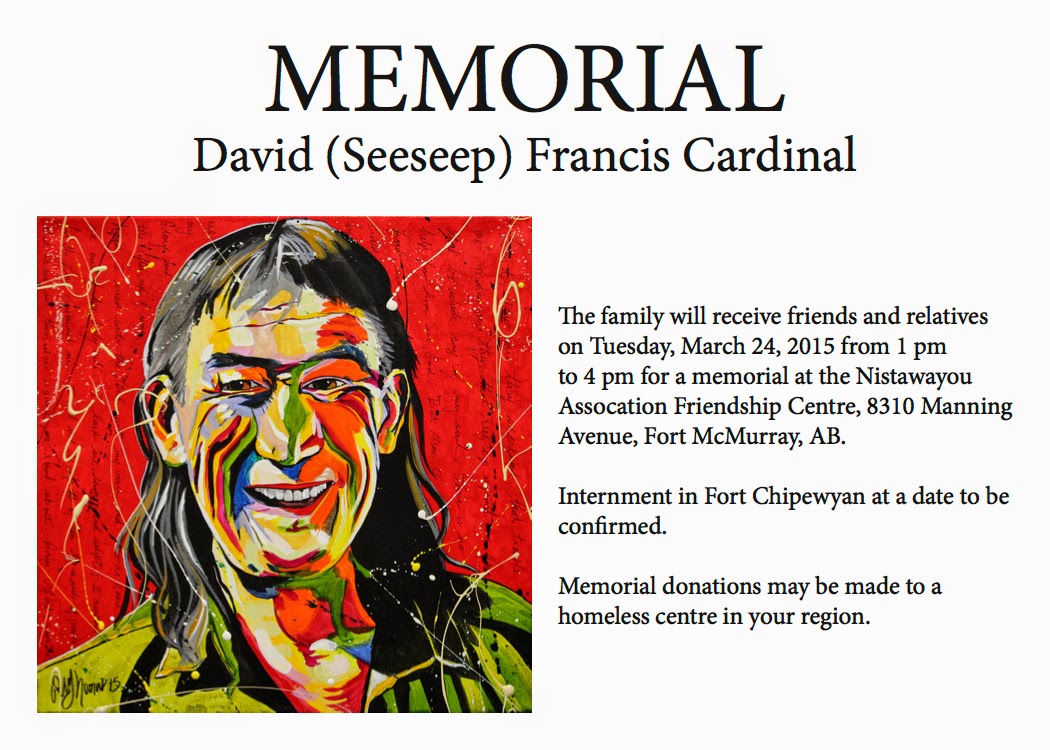 I was blessed by a visit by Chris Aaron, owner of Freshii in Fort McMurray, and a man with a remarkable past in the art business - he used to run a gallery in Vancouver.  He is also an avid collector of poster paintings by an artist called PAO from Cuba. 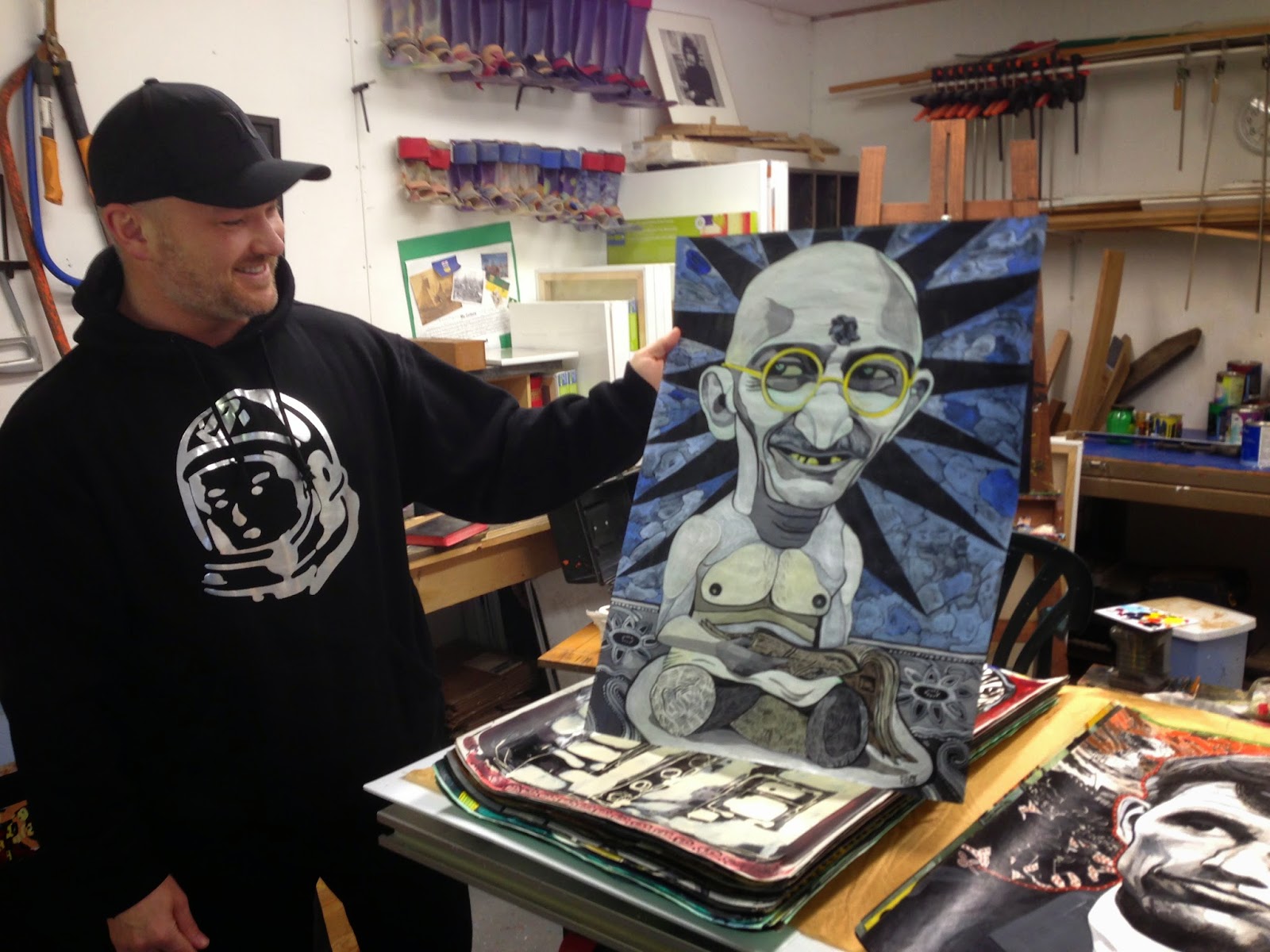 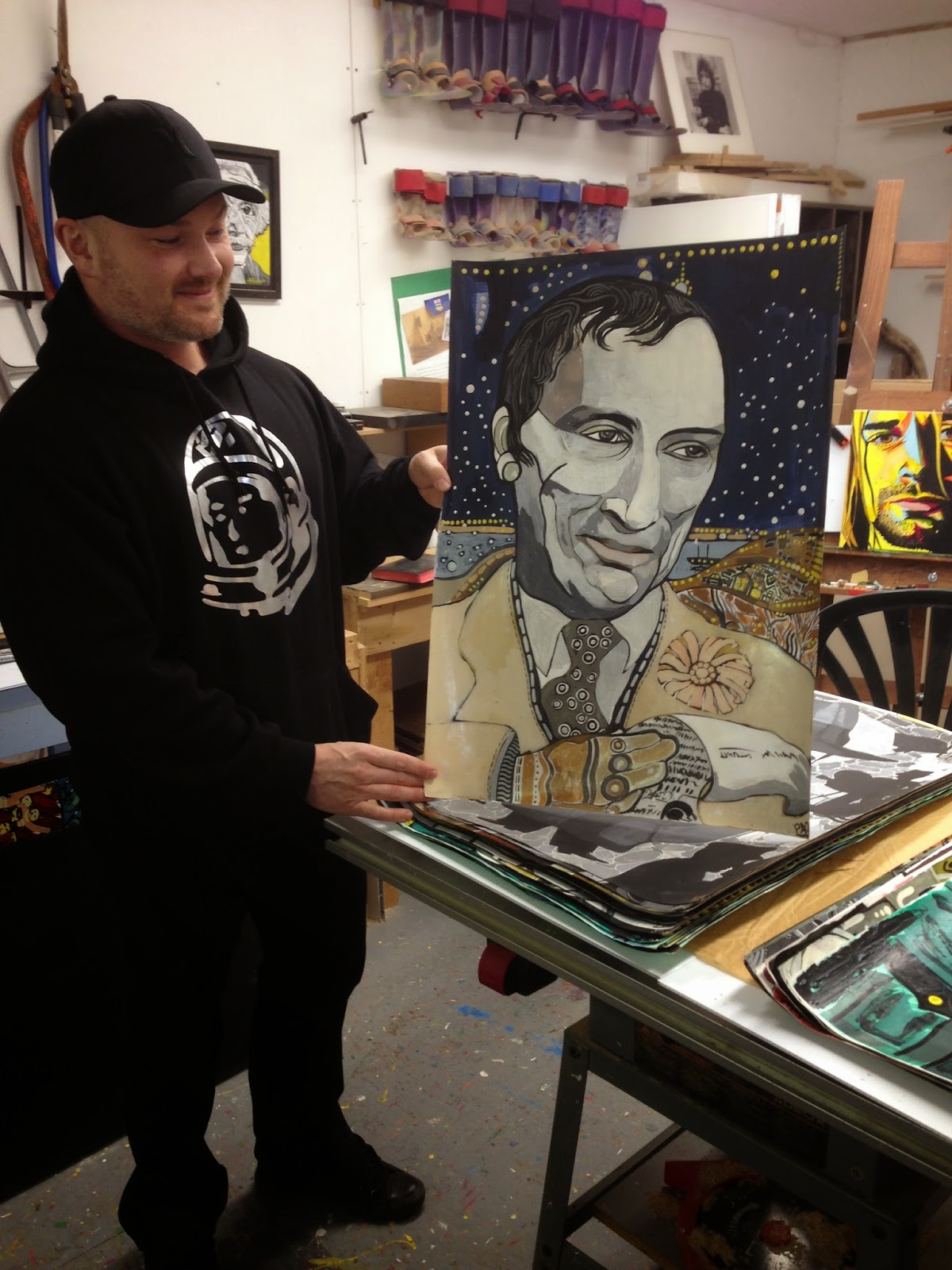 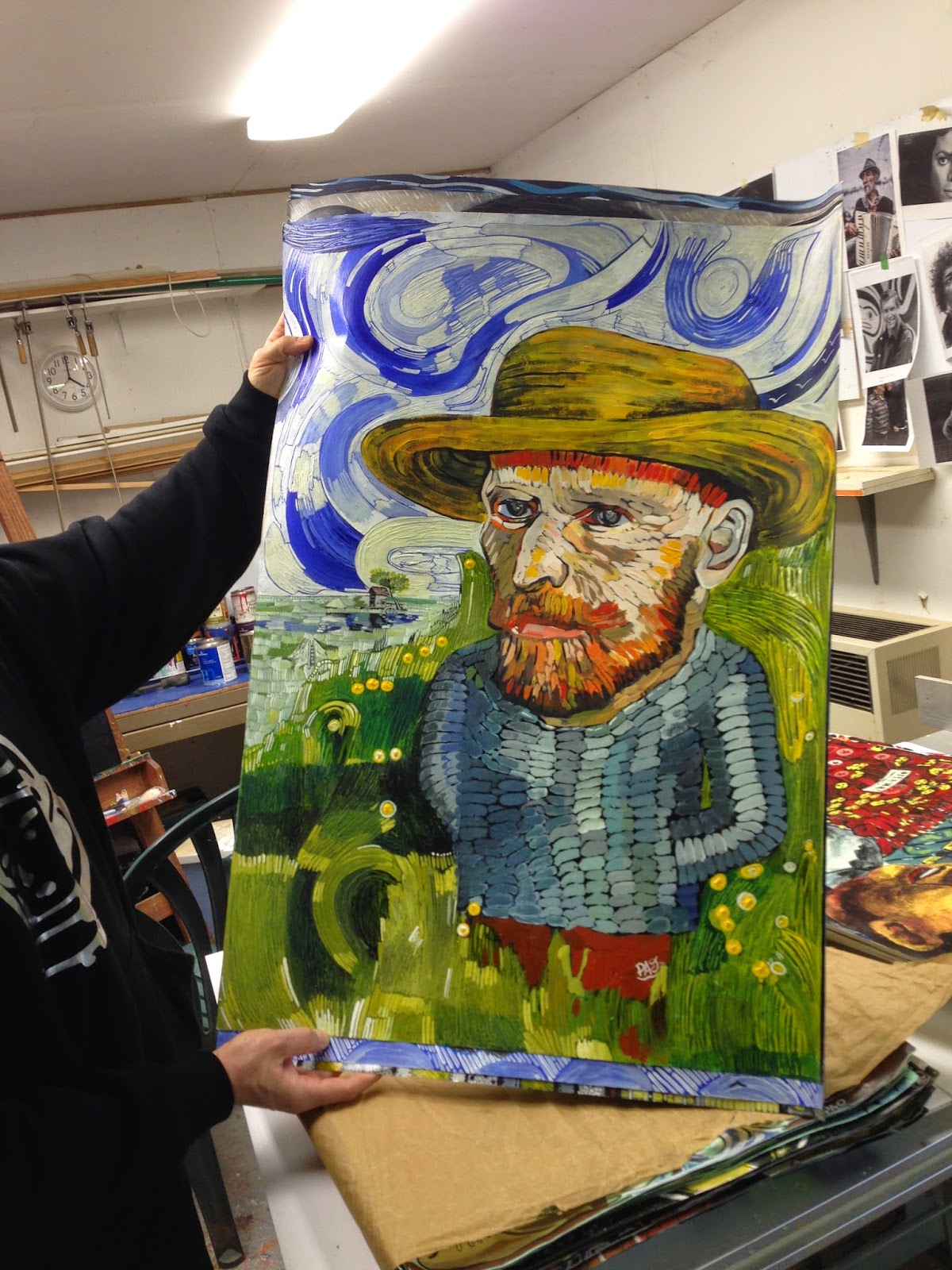 I was shaking with excitement as he flipped through these amazing pieces, probably 40 or 50 in total, each rich with historical symbology and meaning.  I hope to see these in a local gallery some day, as it would be a wonderful way to engage with both art and history. 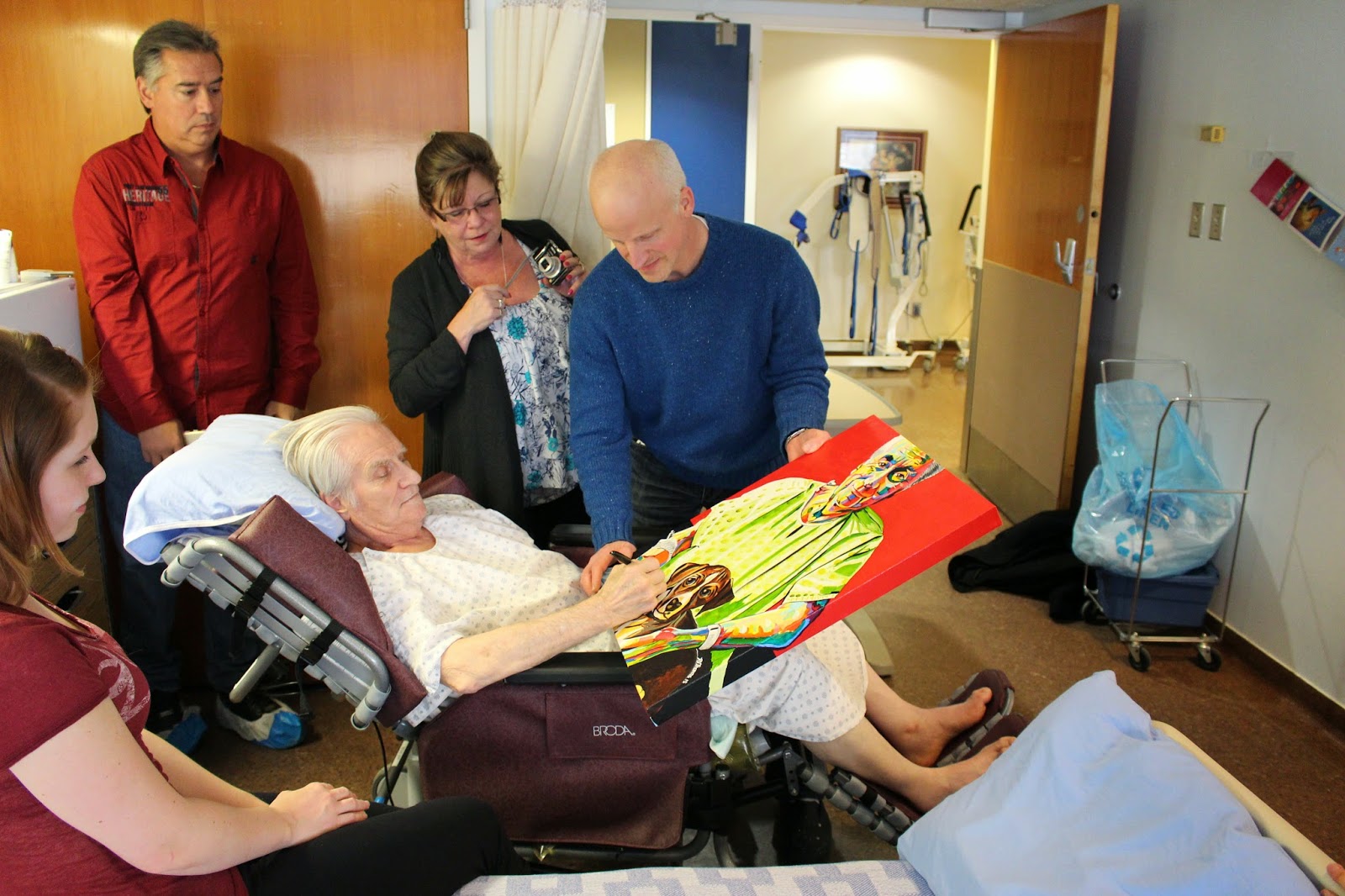 Later in the day, I delivered the portrait of Mike Paskal to his room in the hospital.  Surrounded by his lovely family, I was able to be there as he signed his name and cracked jokes, his indomitable spirit distinctly intact.

"You know what burns my ass?" he asked in a weak voice.

"A fire this high," he replied with a completely straight face, indicating with his hand about waist high. 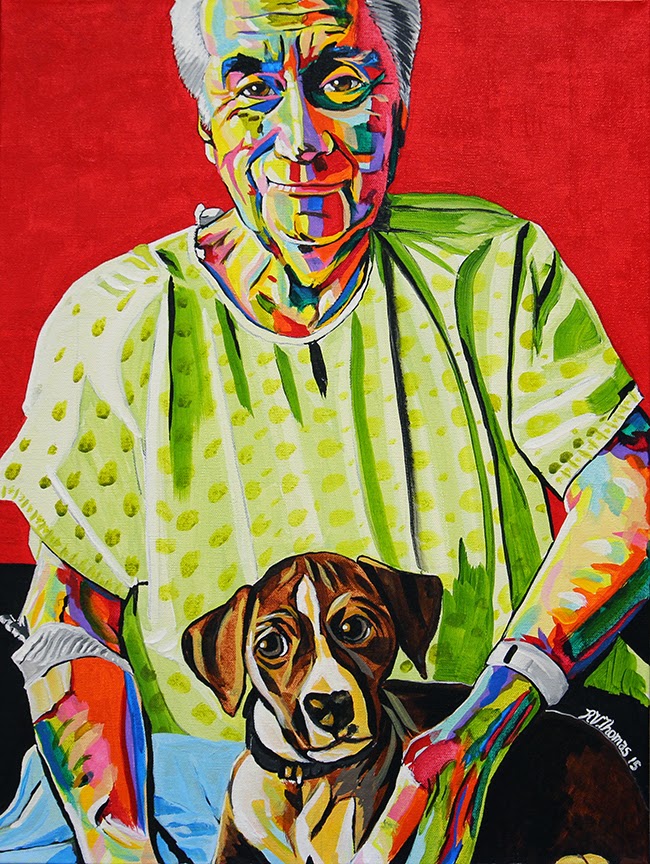 He cracked a few other good ones, shared some memories, and talked about how wonderful it was to "feel that puppy's little heart beating" that is featured in the painting.

Mike was one of the clients that I worked with on The Need to Know Show on CJOK in the late 90s.  Businesses would buy a half-hour of airtime and I would interview them.  In Mike's case, I would take the show on the road to his Minute Muffler location and he walk around the shop talking auto mechanics, visiting with staff, telling stories and snapping off one-liners.  I think it made for entertaining radio.  After I left the station in 1999, Kenny Jones took over the show.  He must have made a real connection. Mike insisted I say hello for him - Kenny now works on-air in the Vancouver area. 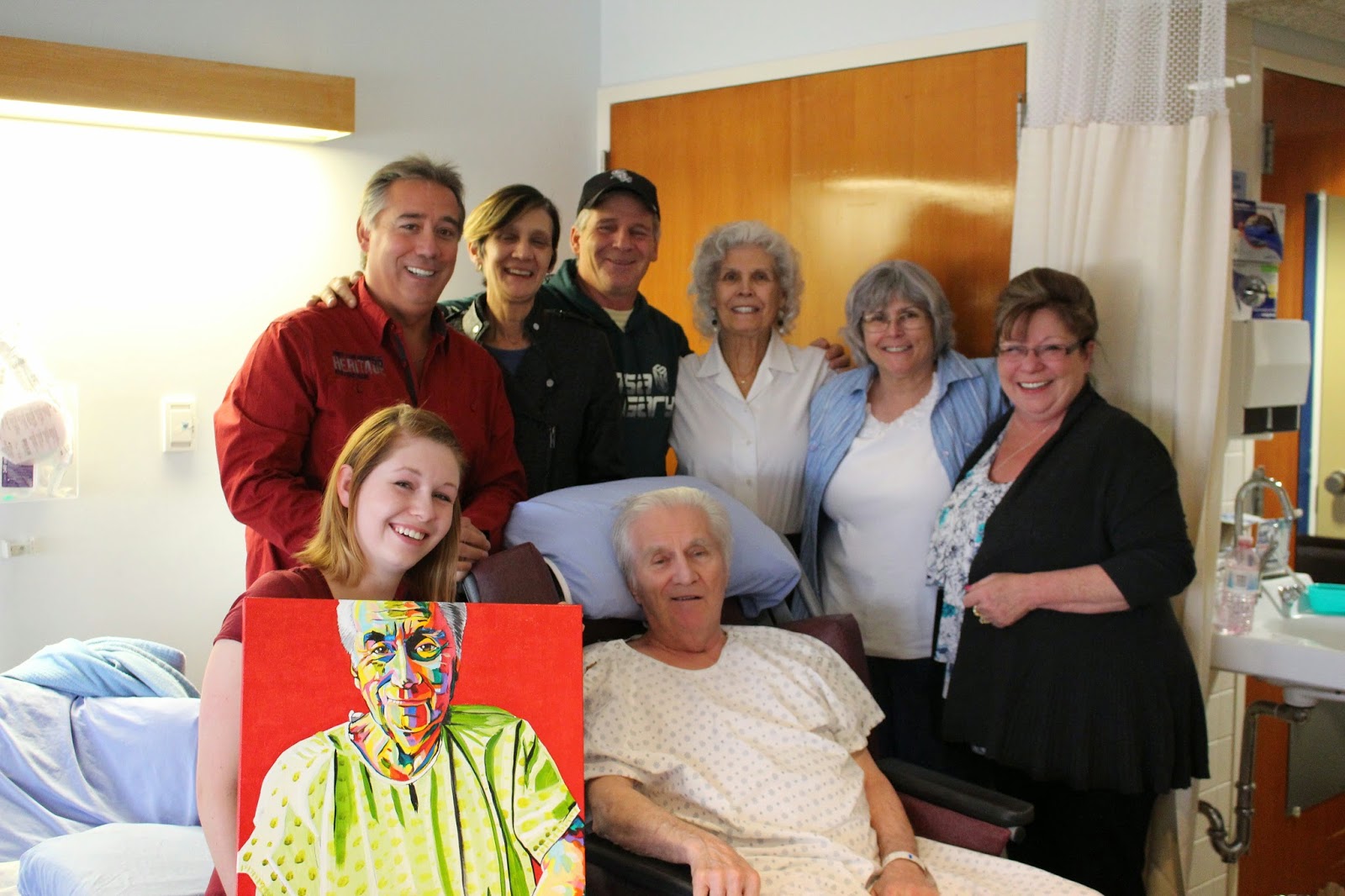 I can't articulate the honour I felt to be in that hospital room, in that exact moment, surrounded by such good people hanging out with their dad, grandpa, and husband.  The gratitude I felt and still feel is immeasurable.

Yesterday was also the day that every bone in my body said to paint Kurt Cobain.  I was flipping through my inspiration folder early in the morning when I came across the former and late lead singer of Nirvana.  This was one of those rare projects that was not a commission, which meant it was open to the world. 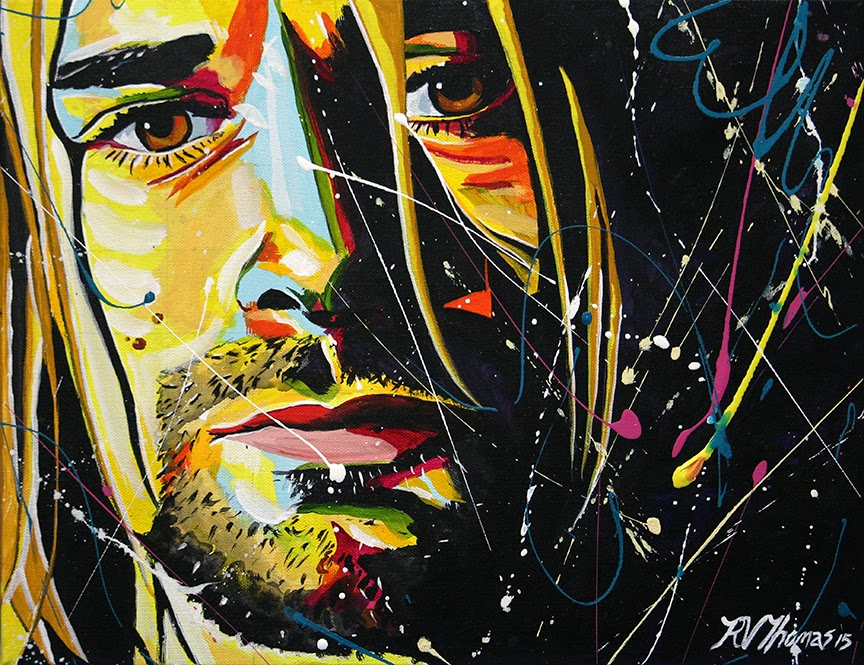 After posting it in various places, including the Fort McMurray Everything Goes page, messages started pouring in asking about purchasing the painting and doing commissions.  I've never experienced anything like it.  It found a home almost immediately.

One person made a suggestion to start a Facebook page.  As a social media guy, I should have arrived at this conclusion a long time ago: create a place where everyone can see my work, whether we are connected or not.  So, yesterday evening I set out to do just that and invited a bunch of people to LIKE the page.  I've been adding photos of my artworks and grouping them into clusters (albums):  Sports icons | The leaders and innovators | The writers, actors and directors | Music icons | Real amazing people.

I am grateful to the hundreds of friends, loose connections and strangers who have liked the RUSSELL THOMAS ART Facebook page in the first 12 hours of it being launch.

It was one remarkable and unforgettable day.