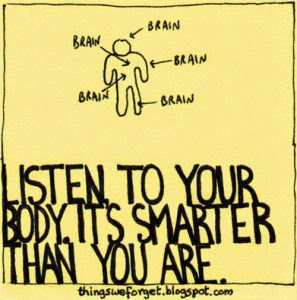 I believe the universe sends us signals all the time, little clues about life's choices, pathways, obstructions and opportunities.  The signals come through the air into our bodies and inhabit that space called instinct.  Sometimes the signal is strong and dynamic, like that radio station that pops out of the car radio.  Other times it is weak, sprinkled with noise, and hard to discern, like a conversation in the middle of a rock concert.

I'm trying to get better at picking up my signals.  Just last night, I was about to embark on a project when all of a sudden my body tightened up.  I had the canvas on the easel and was about to start drawing when I put down the pencil, shut off the light and walked back into the house.  I decided to take a different approach, went back out to the studio, and everything felt better.

Everything in my body told me I needed to pursue the opportunity down in Calgary that happened last weekend.  It would have been so easy to give my regrets, as I was fully committed to something else. But something inside of me said that I needed to try and make it work.  Through the graciousness and generosity of the organizers of the event that I was supposed to do, the plans got changed and I was able to experience a magical day of painting Robin Williams as Patch Adams and raised lots of money for charity.  The project also resulted in a number of other commissions and projects.

There have been other times when I ignored the signals that were coming my way.  Inevitably, those life choices ended up being added to the list of things I wish I could DO OVER.

Here are some guiding statements that might help you listen more effectively to the marvellous signals the universe will send you today.

FLUSHED with GRATITUDE for something or someone?  Express it. Share it. You are being given a gift intended to brighten someone's day.

Feel like TURNING LEFT when you're about to TURN RIGHT?  Turn right and see what happens.

STOMACH TWISTING as you're about to do something?  Take an extra moment to consider if you're better off doing something else.

FEELING REGRET for something you did or said?  Reflect on what you did or said and why; see if you can make it right.  Ask yourself what you learned and how you might adjust how you act/react in the future.

Our bodies, with the guidance of the universe, are incredibly intuitive and undoubtedly, our greatest resource when it comes to navigating through life.  The trick is to be open to hearing the messages that are available to us in the time, place and space that they are being given.
Email Post