Russell at the bat

My memories of having played baseball are sketchy, little drips of recall connected to people, places and unforgettable sensations.  I can't tell you when I played, exactly.  I suspect it was in my junior high school years, between grade 7 and 9, but there is no mental connection between the two things.  Baseball seems to stand solitary, an isolated activity that involved travelling to small communities in the area that had managed to scrape up enough players and had run down ball fields carved out of  ragged school fields.  Ours was no better; we were a typical prairie town in decline.  The glory days of massive ball tournaments with travelling teams from the U.S. were several decades gone.  We were left with the scraps.

Tossing the ball around was one of the few things, besides playing cards, that I did with my dad.  He loved baseball, still does.  We knocked out more than a few fence boards and smashed a few window panes whipping that ball around the backyard.  Dad was eventually traded for Delton, my best friend and neighbour growing up.  Our "mound" became a spot near the gate at the back fence, the shed was the back stop, the tin badly dented by pitches gone wild.

To my parents' credit, they never gave us grief for the worn out spots we created on the grass, or the damage we were doing to the shed, fence and various other victims of forlorn fastballs.  We were outside and we were active; that's what mattered most.

Tossing the ball gently turned to bullet speed fastballs as our arms woke up.  Once in awhile, the ball would arrive, not in webbing, but in the shell, where the hand absorbed the full force of the throw.  Our tolerance for pain increased with the speed and our confidence. We played catch for hours, till our arm sockets ached. 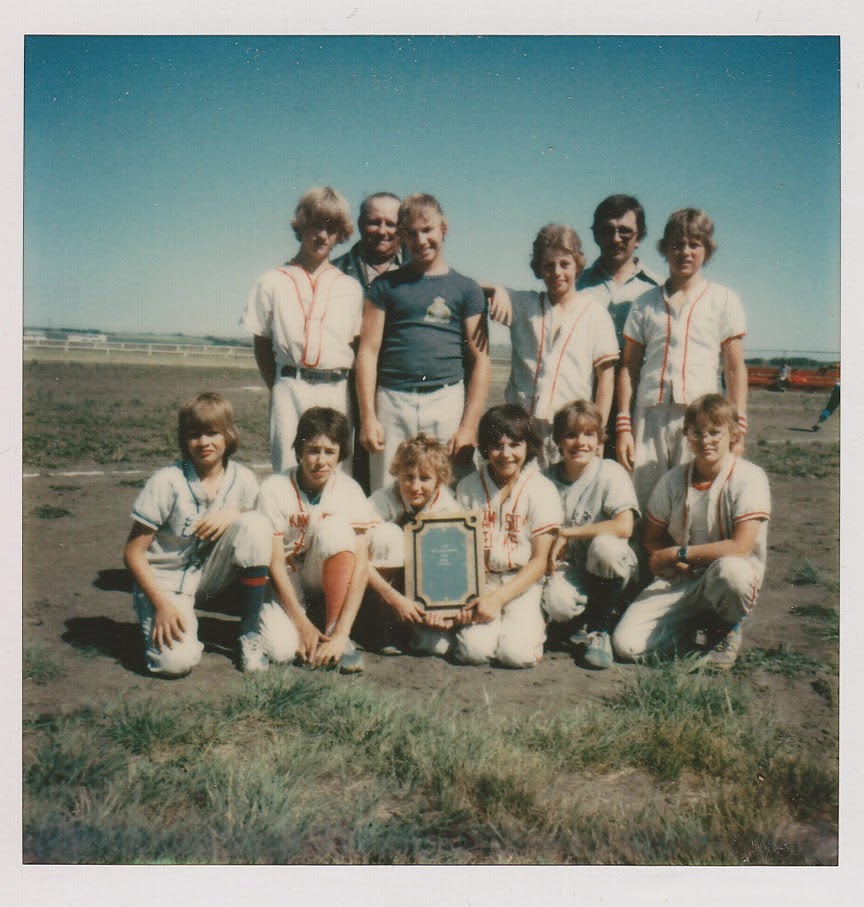 I think I batted clean-up (4th in the batting order) most of the time.  At least that's how I remember it.  I was a good long ball hitter, a decent fielder - I think I played first base - and a terrible relief pitcher.

We were playing at home when I had the swing of a lifetime.  Maybe the bases were loaded; the emotions connected with the memory suggest that might have been the case.  The pitcher from some dusty village down the road had the wildest sidearm we had ever seen.  None of us were able to connect early in the game, as the ball, fuelled by that crazy arm movement, seemed to have a mind of its own.  Then he started to get tired.

Three base hits in a row to start the inning.  Now Rusty was at the plate.

That's what they called me on the field, named for the great Rusty Staub who played with the Montreal Expos.

I stepped up to the plate with my bat:  trusty Number 33.  The number was imprinted on the bottom of the knob, likely relating to the length, though I was never sure.  It was the perfect weight, grip and feel and it had been my companion through much of that season.

The pitch came right over the plate, right into the heart of my long ball territory: drifting, curving, gliding right to the perfect spot, in the top third of the strike zone.

The feeling of a ball hitting the sweet spot of a bat at the same time that you're in the middle of a once-in-a-lifetime swing is indescribable, total perfection in a single moment of orgasmic brilliance.  The ball sailed over the fence, higher and father than any of us had seen previously. Time stopped, arms stretched high into the air, and teammates and coaches gathered at home plate as I came around third base and headed for home.

I had grand visions of playing professional baseball for a brief time, an idea that I could do this thing on a grander scale.  Eventually I lost interest and moved on to other things.  All that is left of that glorious time is a single Polaroid, of young men and a couple of coaches (Mr. Wonitowy and Mr. Boychuk) gathered together on a prairie ball field wearing our hand-me-down uniforms.  It is enough for me, as I will always be able to go back in my mind to that single moment when time stood still and the ball, bat, and me were one.
Email Post