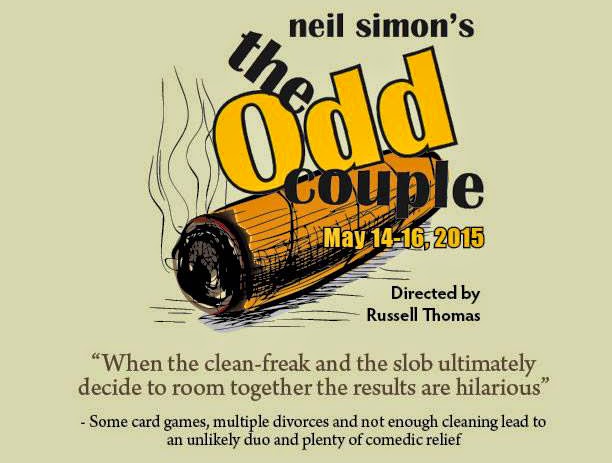 One of the silent characters in this play is the game of poker.  It factors greatly in the flavour of the piece, particularly the opening act as most of the gang convenes for their regular Friday night game. The believability of the playing and how the characters relate to each other within the game are essential to this show.  So, they began yesterday's rehearsal with a poker lesson.  I'm grateful that we have two knowledgeable players in the show who were able to get the rest of the guys up to speed.

Over the years, I've seen many different ways of "warming up" the cast: walking around in character (A Christmas Carol), vocal exercises (Les Mis), and a physical warm-up (Hometown).  For The Odd Couple, they're going to play poker, an ongoing tournament that will continue through the entire process.  To add some stakes to the process, I will paint the portrait of the person with the most chips.  The caveat is that the moment the game begins, they need to slip into character and stay there no matter what.


Natalie and I were killing ourselves laughing as the men went through Act 1 a couple of times last night.  They individually made bold choices and added energy to the scene.  They've also started to move around, getting a sense of the space and some of its key elements.

As we worked on the card scene yesterday, I thought of my dad and mom who play Bridge every Monday night at the senior's centre.  Within that group of players, relationships form, likes and dislikes develop, and buttons get pushed.  There is also an authenticity about the experience that can't be faked.  As the boys were learning to play poker last night, authenticity was in abundance; they were laughing, animated, and relaxed.  But just like every gathering of people playing a game around a table there is that person who takes way too long for their turn, another who complains constantly, and several others who are competitive to a fault.

You're going to experience all of that and more when you come to see the show in May.  As we're in the Recital Theatre, there will be a limited number of seats, so don't wait too long to get yours.  They are available now at Keyano Box Office.
Email Post