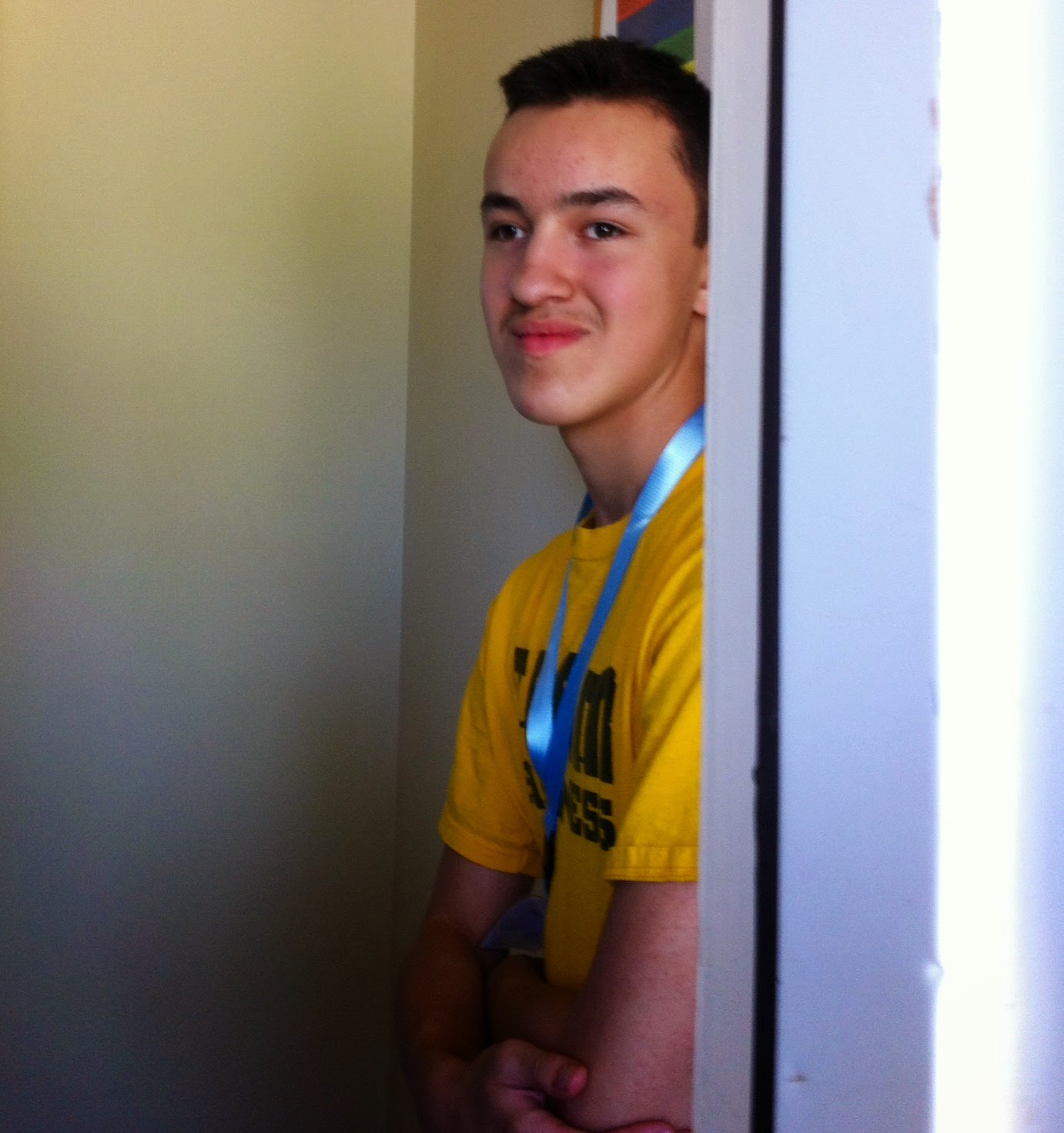 I took Dylan, 15, along for a United Way Seeing Is Believing tour to Stepping Stones youth home and Some Other Solutions yesterday.  Soon to go into grade 10 at Westwood Community High School, Dylan is at that age where trying to keep busy during the lazy hazy days of summer is very difficult.  Having just returned from a life-altering 6 days at Artstrek in Red Deer, a provincial theatre camp for teens where he was up and active every morning at 6:30 am, he's trying to grapple with the transition from having no time to himself to having way too much time.

As we had space, and as I knew he would appreciate the experience, Dylan came along with a small group of us.  He was quiet through much of it, soaking in the wisdom of Lynn Rhoddy, the executive director of Stepping Stones as she walked us through the home up in Dickinsfield.  This is the place where young people can lay their heads if things have become untenable at home, if either their safety or emotional health has been significantly compromised.

Lynn is amazing in terms of her depth of experience, coming out of the court system and into the work she's doing now with Stepping Stones.  She talked about the influence of family discord, drugs and alcohol, and various other factors that contribute to a young person ending up on their doorstep.  Stepping Stones is a nondescript home in an active neighbourhood.  In fact, if you didn't know it was there, you'd think it was just another home on the block.

"We really focus on being being good neighbours," said Lynn.

Several years into the vital program, they have been integrated and accepted by the families in the area.  They have become an essential haven when things go topsy turvy in the life of a young person.

She succinctly talked about the role of organized gangs in our community, manipulating young people to get involved in the drug trade and child prostitution.  Several of our foundations were rocked by the shocking reality that exists underneath our noses.  We spent a lot of time during our debrief talking about the jarring nature of the information.

"Since you're in high school Dylan, have you seen the presence of gang activity?" I asked as we sat around the board room table back at The Redpoll Centre.

"Oh it's there," confirmed Dylan.  "I know it goes on, and I just choose to stay right away from it."

"The key thing word that Lynn said was 'prey'.  They prey on people who are having a hard time connecting, those who feel alone, or don't feel they belong."

From Stepping Stones we traveled down the hill to Some Other Solutions on Manning Avenue where we were able to watch three skits that they had prepared to begin the conversation about what they do.  A lady had lost a baby and was getting comfort from a case worker, children in the classroom learned about bullying and its lasting effects, and a desperate young man called the crisis line feeling suicidal.

Once again, the scene about losing a baby really hit home for me.  Dylan connected with the crisis line call, as he is in the middle of the teenage years when fitting in, feeling fulfilled and valued is an ongoing challenge for many.  And being the social fellow that he is, I get the sense that many confide in him what is going on in their lives, and that needing to use a crisis line is not far from the realm of possibility.

We were being filmed throughout the entire Seeing Is Believing Tour, by Matt, Jon, and Mike of DK Films, for video tours that will be released some time this fall.  At the end of the day during our debrief, I thought some of the conversation would revolve around the filmmaking process, but it didn't.  Instead, we had a deep dialogue about what we had just seen and learned.  We also probed some of the questions that the tours inspired.

Dylan's contributions to the discussion were thoughtful, intelligent, and profound.  He is a deep thinker and feeler.  I was intensely proud of him for having gone through the experience and contributing to it in such a substantive way.  He provides such a valuable perspective, not just as a young person going through the experience of growing up in Fort McMurray, but as a thoughtful, empathetic human being. He continues to amaze me.

I know Dylan is going to read this.  He is one of a handful of readers who tend to check-in each day to the Middle Age Bulge blog  So, Dylan, for the record: I am proud of you and grateful for everything that you are, and all that you will be. Thank you for being with us yesterday.
Email Post