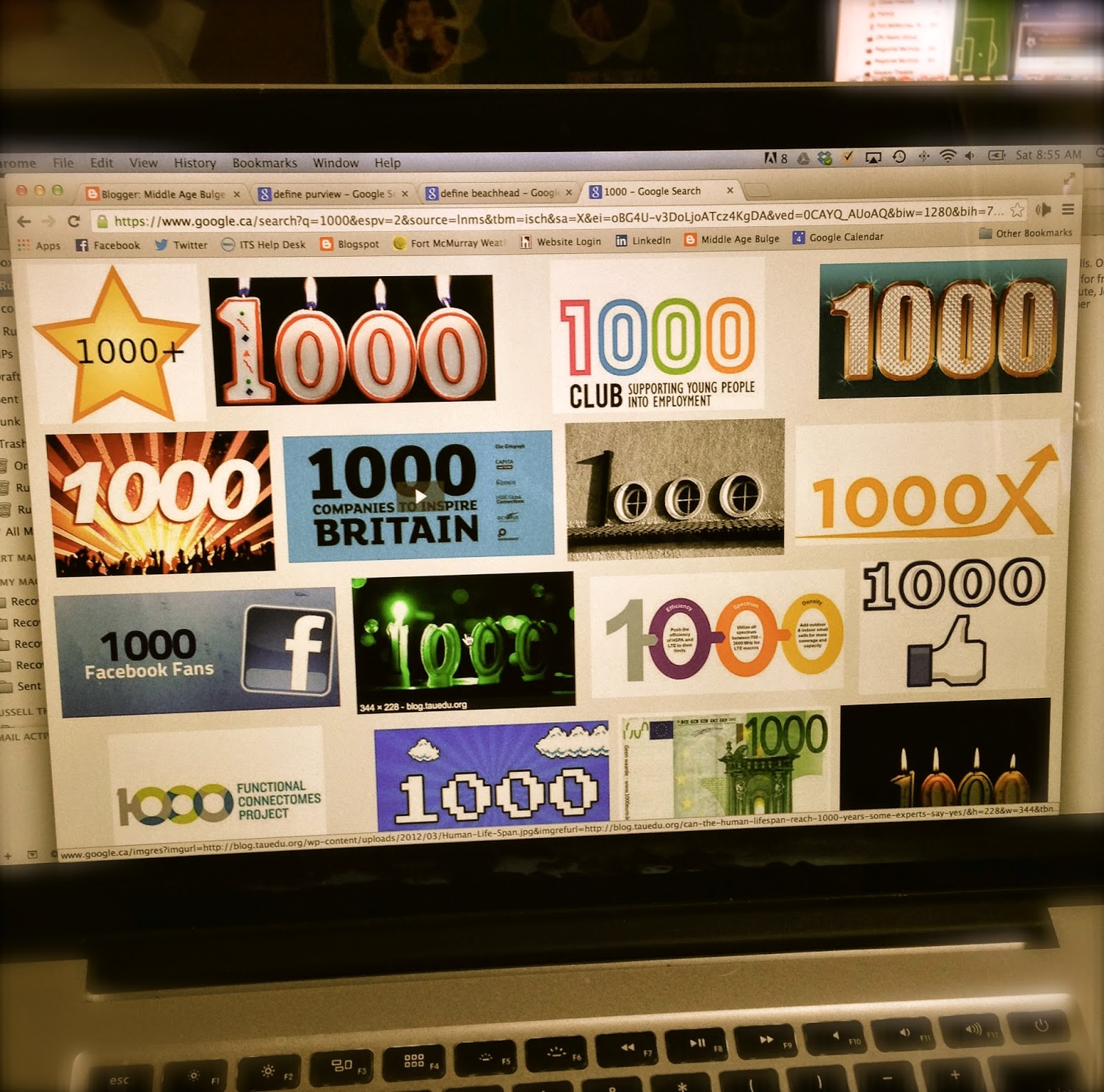 This seemed like an insurmountable plateau when I first started on this writing journey.  Reaching 100 felt like a stretch let alone 1000. Four and a half years later, here I am.

Almost every morning I wake up and write something.  Sometimes it is very purposeful, with a topic or issue that I know is going to be read by lots of people.  Other times, it is something that pops into my mind as I sit down to start writing, first cup of coffee in hand and ready to go.  It generally takes me an hour or so to craft whatever thoughts I have and release them out into the world with one post on Facebook and one on Twitter.  What happens next is always interesting to watch.

As a municipal politician (2010-2013), there were a number of times when posts about controversial subjects - the philosophy of putting the arena in the city centre or the bridge that was once proposed to traverse the Snye - that not only attracted hundreds of readers, but media attention as well.  The blog, or the ideas, information or perspective that it contained, became the story.

Once in a while, a blog post became my therapy, my way of working through feelings, frustrations, or circumstances that were beyond my control.  Behind short essays on leadership, integrity and various other subject were rivers of inspiration drawn from the professional and personal aspects of my life.  Invariably, what I wrote about resonated with others and circumstances that they were going through in their lives.

The Middle Age Bulge blog has become a living and public journal, a compendium of anecdotes and ideas.  It is an incredibly useful resource when I'm looking back trying to remember things.  I dive into the archive of posts at least once a week to find a name, remember a story, or grab details from some distant memory that are nicely chronicled in a series of words and pictures.

The public record was once thought to be the exclusive purview of newspapers, but no more.  The Internet is where people to go to find out what happened, to stitch together bits of data and images to understand and engage with the history of things.  By way of example, I went looking for images for a blog post I wrote yesterday and entered Burrard Landing public art in the Google search bar.  Three of the top 10 image search results are photos that I took and published in a blog post.

There were several surprises among the thousand posts, stories that inexplicably caught fire and took off.  The post written in the smouldering aftermath of the Slave Lake fire (Slave Lake is Burning) was the first example, and for a long time was my most read post.  That distinction ended up eventually residing with a benign post about the television series The Big Bang Theory, thanks to several pictures that showed up high in the search rankings for a time.  But, the post that beats them all, is a post I wish I didn't have to write about The Legend o Dr. K.P. Wong.  Owing to his incredible legacy, it has been read by well over 10,000 people.

In committing to a daily practice of writing the Middle Age Bulge blog, I've strengthened my writing muscle, grown my communication skills, and established a solid beach head from which to share stories, passions, ideas, and myriad other things that matter to me and sometimes matter to others.

My deepest appreciation goes to the readers for stopping by from time to time.  Without you, this would be a very different exercise.